We've been a little quiet lately planning a huge restock and now it's done we're really happy to announce it! We've added many new items to the shop as well as re-stocking many popular existing items too. Check it out!

Don't forget about the new releases in our Homebrew Games section too. We also re-stocked all of the Lynx capacitor and power circuit replacement kits. There is a limited quantity of NiMh charge module kits left too.

As always, check our support/help page for installation guides.

We were aiming to have this out end of April time frame, but due to postage delays that date was slipped, but now the Lynx Jam 2021 cartridge and boxed version are out and available for purchase! You can get it either from us or Yastuna Games (if you are in EU). Below are the links...

There are 6 games on the cartridge and all of these are from the 2021 "Let's Make Something Scary" game jam we put on. Here's the list of the games...

Who doesn't love a good retro gaming convention? If you happen to be in US, or specifically in Milwaukee, WI, make sure to attend the Midwest Gaming Classic and drop by Songbird Productions' booth. They'll be there between the 29th of April and the 1st of May. Here's what Carl from Songbird had to say about the upcoming event..

It's official! Songbird will have a booth at Midwest Gaming Classic just a few weeks from now. This annual event in Milwaukee, WI, is one of the biggest retrogaming & pinball conventions in the USA! Songbird will have a wide selection of Lynx, Jaguar, and Evercade merchandise on hand for the casual collector as well as the diehard enthusiast. Expect European imports such as Impulse X as well as a number of new Lynx games including YNXA, Asteroid Chasers, and Raid on Tri-City.

Want even more? How about preview carts for Microvaders and Ultravore? Or maybe a super-rare Jaguar Voice Modem on display? You'll get a chance to check out these one-of-a-kind items only at the Songbird booth. We might even have a few of these prototype items for sale!

Make your reservations now to attend the show, and be sure to stop by and say hi! It's always fun to meet fans and talk about the hobby. :)

FujiNet is an under-development device for Atari 8-bit computers (400, 800, XL and XE series, and XEGS). It started as a network adapter that attaches to the SIO (Peripheral) port of an Atari 8-bit computer system but has become an all encompassing SIO peripheral emulator.

...and now it's in the works for the Atari Lynx! The project is in the very early stages of looking to bring FujiNet to the Lynx, we had a chat with Thom, one of the developers and he's given us a bit of an insight into what's being considered...Here's what he had to say...

This is what we are speculating thus far:

This is exciting to see, especially since the members of the team that's looking into this are not one of the usual Lynx hackers out there. Always good to see new people coming to explore what the Lynx can do!

We've been writing about Captain Harlynx for a while and following its development, well now you can play it in your browser using our Atari Lynx emulator here - Captain Harlynx. Remember this is a demo and there's still lots of work to go on the game, but this is a taste of what's to come soon!

We've got a bunch of new things in our shop, a sneak preview of an upcoming boxed game release and a huge sale on BennVenn's LCD kits! So check it out...

While all of the Rev6b LCD kits have run out, we managed to secure a small batch of Rev4 kits from BennVenn. These require soldering and brightness is controlled via the backlight key, but the image quality is the same as the latest revisions. At the price of $60/kit you will not think twice! If you're buying two or more, use the code LCDV4SALE and get a further 8% discount! Get them here. 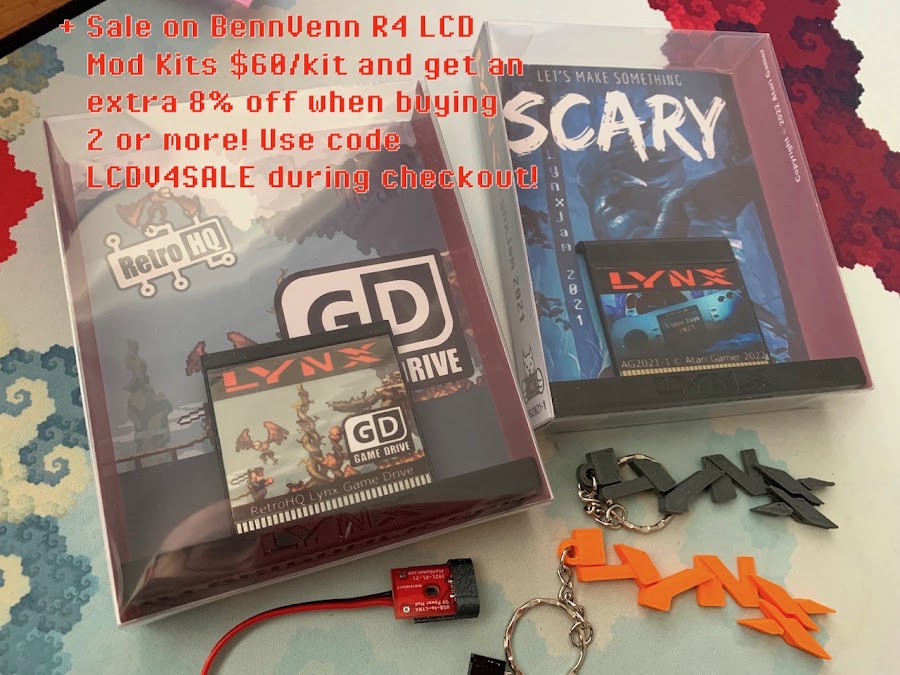 You're not a true fan of Atari Lynx or the Jaguar unless you have a hat (cap) to show it off! Our resident photographer and amazing game reviewer, Dave, has launched a small online store and is selling these hats. Get them while they're hot! We have the Lynx hat on the way to us as we speak! These have been featured in many photos on our social media already and they look amazing! 😻

After months of work we're happy to announced that we finally have boxed game releases available! These are for our previously released LynXmas 2020 cart and the updated Eggsavier's Cackleberry Rescue game. Both of these are available in the standard sized Atari Lynx game box size. The box is made out of clear PET plastic, and has a colourful insert. The game cart is held securely in the box in a cartridge display stand that can also be used outside of the box.

For Eggsavier's we have a special "learn to solder" bunny PCB available that will get you more comfortable with electronic components, soldering, and (hopefully) modding your Lynx. Assembly and install guide will be released soon.

Both of these are available for purchase from our store here - Atari Lynx Homebrew Games. If you already have the LynXmas cartridge and want to purchase just the box, please get in contact with us. 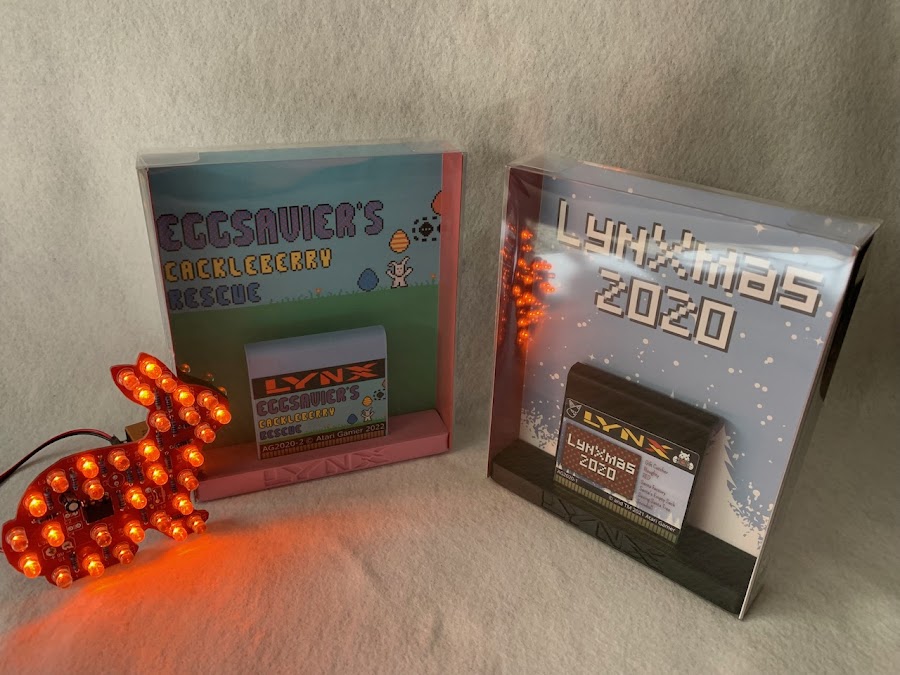 We also have a standard sized Lynx box for the BennVenn ElCheapoSD cartridge. These are available from out shop here - SD Flash Cart and Accessories. 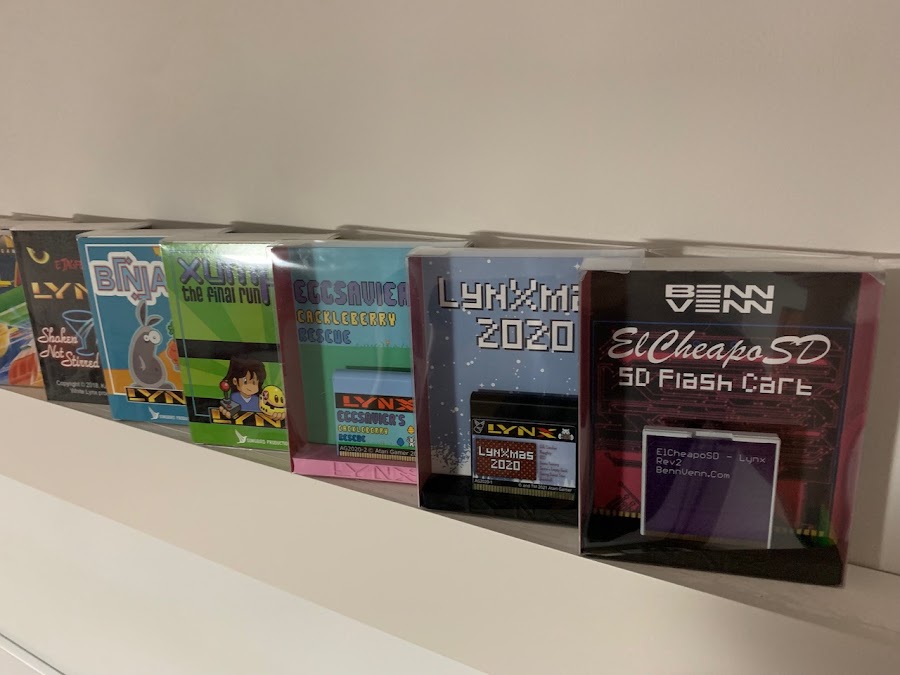 Vikings Saga by Rygar is a love story related in 2 Atari Lynx games.

Hanna the little Fairy of Akureyri & JP the viking are in love but Gryla the witch wants to ruin their love.

She kidnapped Hanna, and stuned JP.

Each game let you play what happened after, based on Hanna or JP point of view.

In Protect the Love, help Hanna escape from the wicked castle of Borganes. Video footage from earlier indev version https://www.youtube.com/watch?v=oXivPv3xvmg

In Save the Love, help JP rescuing Hanna in the dangerous caves of Dimmuborgir. Video footage from earlier indev version https://www.youtube.com/watch?v=ZJCu-S5jaSk

You can buy each game as cart only + booklet (20€), or the whole package with 2 games and a packaging (box + booklet + small tissue bag).

Gameplay preview on the Atari Lynx with 8bit-Hub. 8bit-Strike is an online multiplayer game for 8bit consoles, developed by 8bit-Dude (code/maps), TIX (sprites/maps) and Minu (maps). It uses the 8bit-Unity game SDK.

Links:
http://8bit-strike.com: for up-to-date news and beta tester registration.
http://8bit-unity.com/?page_id=551: for more info on the 8bit-Hub.