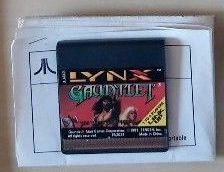 Note: This French variant of Gauntlet: The Third Encounter came with a French language manual and lapel pin(s).