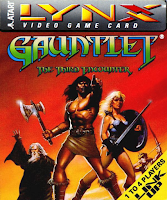 A giant star gem lands at the base of an ancient castle...around it, monsters abound...will you be brave enough to go inside the dangerous catacombs and retrieve the treasure? Or, will you end up carted out in a box like everyone else that tried? Arise! This is 'Gauntlet'!

Most people have heard of the classic game series 'Gauntlet'. A top down action/RPG based in the Middle Ages, this title incorporated medieval-style scenery, dangerous foes and the selection of a number of interesting main characters. Whether you played it at the arcade, the Sega Megadrive or a different console system, the game more-or-less felt the same. Indeed, the "top-down" style pioneered in this game can be seen in other video game classics like 'The Chaos Engine' and 'Zombies Ate My Neighbours' (neither Lynx games – but oh how good they would be on this system!). The question, then, is the following: how well does 'Gauntlet 3' work on Atari's portable powerhouse?

First things first...this version of 'Gauntlet' is unique to the Lynx and could completely freak out fans of the franchise. Why? We'll get to that a bit more later, but it's worth mentioning upfront that this game was originally designed to NOT be a 'Gauntlet' game; in fact, Atari only decided to rename this game 'Gauntlet' when it realised how similar it was to the 'Gauntlet' franchise. I don't know if that explains why you will sometimes see in the game such medieval-themed features as...umm...computer monitors that sell you items. Also, you should be ready for one stylistic shock. This is one of those rare Lynx games, like 'Klax', which can be played holding the Lynx vertically. This can be a bit jarring at first, but to be honest, I was just as happy to play game holding the Lynx the regular way. You won't be disadvantaged either way, so whichever way you decide to play, you should be happy.

Once you enter the game and watch the nice introduction, you'll be required to select your character. And umm...how do I say this...the computer monitors that sell items are NORMAL compared to the character selection screen. I mean, you can be an Android? Valkyrie? PUNK ROCKER? NERD?! Is this a joke? That's what you wonder when you're scrolling through these guys. The even stranger thing here is that, when you look at the character stats, they aren't evenly distributed across all characters; making characters like the book-throwing nerd and the guitar-throwing punk rocker essentially useless. You're better off choosing the balanced avatars like the "Samurai" (who throws a limitless number of katanas) or the laser-shooting "Android". I must admit, as one expecting the medieval style game as seen on the box, the strange modern characters caught me off guard, and not necessarily in a good way.

Visually, 'Gauntlet' is pretty okay, and it does make use of some cool visual features. As you wander the dangerous corridors of the game, you will watch the main screen mostly. But also on the screen is a box that shows your statistics (eg. health) and a box that "zooms in" the items in your immediate view. For example, that key in the distance will scale bigger in this visual box as you walk towards it - nice! The scenery, walls and foes are nicely detailed. I loved the cobblestone grounds, the hedges, and especially the hilarious plants with huge mouths that can spit you across the maze to other areas. You'll come across giant ghosts, lobsters, frogs and all manner of other strange creatures on your way. Sprites are small, but nothing gets lost. The various distinctive potions, foodstuffs and treasure sacks are also visually colourful and easy on the eye.

Sound-wise, 'Gauntlet' actually has some nice effects. The weapon-throwing sounds are all great (especially the bow and arrow) and there are several distinctive sounds that emanate from the speakers when you eat, read a scroll, or exit the level portal. There is a simple musical theme that plays in the background of each level. It's sadly the same theme for every level, but then it's better to have this nice theme than nothing at all. I did like the "ding!" of picking up each money bag, and the 'spllshshsh!' as a plant spits you out. There's a lot of great aural touches as you journey.

Controlling your character is a piece of cake, which is nice given there could have been a lot that could go wrong with this kind of game. You can walk whichever direction you like, and your character will be faster or slower depending on their stats. I wouldn't use a slow character myself, just as a tip; there are enemies who are just too fast. It's always easy to move around the environment and fire your weapon. The item selection option takes a little time to get used to, but it's done very well really. Once you collect items on the map, you can choose when you use them; a mechanic that rewards careful and strategic players. Sometimes you'll be required to be shrifty, because your character can't carry everything. Often things will need to be dropped or used in order for you to continue the hunt.

Play-wise, there are some great things about this game; and, some "not so great" things. Let's start with the positives. This is 'Gauntlet', plain and simple. There's plenty to collect, there's enemies to shoot, and there's gold to spend at the various shops that line the caverns. The heroes and foes are varied, and the challenge bar is set high. The levels also are well-designed and look nicely different to the last ones you played. If you're a fan of 'Gauntlet'-style games, you could well enjoy the difficult mazes this game puts you through. There are also a few surprises along the way which I could have never imagined, so it's definitely worth the push to see what is next.

Negatively, of course, there are some issues with 'Gauntlet'. Your life force ticking down every second feels completely unfair and unnecessary, and really makes the game tougher than it should be (something that marred 'Viking Child' on the Lynx as well). I gotta be honest, I can't STAND this idea in a game; it puts me right off. The several modernised characters available are also freaky, and completely misjudge (intentionally or non-intentionally) the medieval character of the original game. You'll also find some similar related "era" issues the further on you play, and these remain jarring to look at visually. With forty levels of mazing and no passwords, it's a long slog to get through the game from the starting stage.

Admittedly, long game-length and a lack of passwords is an issue that affects many other Lynx coin-op arcade translations; 'Stun Runner', 'Pacland', 'Rampage', 'Rygar', amongst others. How do game designers effectively cap off a game that was rarely supposed to be finished, if at all? Some game designers do this better than others. Thankfully, in 'Gauntelt', there is a legitimate level warp option that does let you play halfway through the game, which is very useful. It's still a big trek, but at least it's not a matter of starting from scratch every game. 25,000-plus hit points don't go very far given the onslaught you face.

All in all, what can be said? There's some fun to be had in 'Gauntlet', but you'll be forced to look past some of the annoying quirks; the weird line-up of characters, the lack of save points (passwords) and the sometimes unfair odds stacked against you. Still, the core Gauntlet gaming mechanic here is actually well done, and you certainly won't be finishing the game in a hurry. If you persevere, you may well find that 'Gauntlet' is a fun little action/RPG that is great for long plane trips, relaxing Saturday afternoons and night gaming sessions. Like Lynx 'Joust', you may just find that you concentrate on how far you get in the game at the start, and then find yourself considering later more strategic approaches to the traps and dangers you come across. And really, any game that can get you to think cautiously and deliberately is one that is well-thought out in general. If you look at it baldly in conclusion, 'Gauntlet' won't likely top many Lynx 'best of' lists, but it's a competent enough dungeon crawler with enough action to satisfy nerds, punk rockers, samurais and pirates alike. Give it a try!