Revision 5 of the BennVenn LCD mod kit for Atari Lynx introduced a solderless option - meaning you just snap in a ribbon cable in place without having to bust out your soldering iron. That install was quick and very easy, but like all the other revisions before it, it lacked one feature - the ability to use Lynx's original brightness wheel to adjust how bright the LCD is. Well with the 6th revision, that is dealt with now too.

We've received our kit a couple of days ago so here's a quick look at it and a guide on how to install it...

First the packaging - it's great to see that BV is putting FRAGILE sticker tape on these (maybe we've not noticed these in the past though). Each of the kits is also sealed into a nice and snug bubble wrap envelope. Our kit didn't include the mounting bracket (since we supply them) but all standard orders do include one. We've also decided to use version 3 of the mounting bracket (it's smaller and lighter) - all currently shipping kits will include the slightly more bulky version 2 orange bracket. 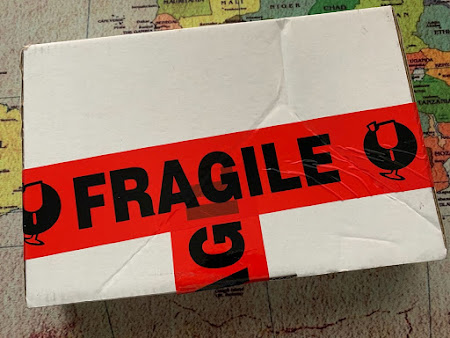 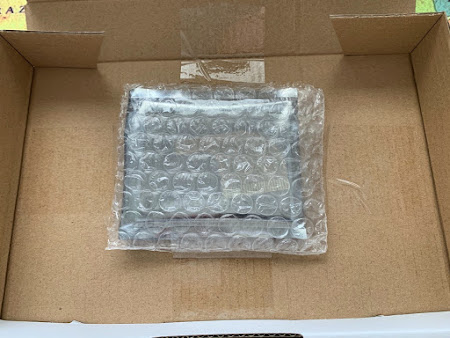 The LCD kit itself has the LCD and a PCB secured to the back of it, plus an orange ribbon cable for connecting it to the Lynx. Due to an admin error these "revision 6" kits have "rev5" printed on them still. However, if you look at the PCB on the back of the LCD, you will see a row of eight through-holes pins above the C7 capacitor (top left in photo), if six of these are not covered by the ribbon cable, you have a "revision 6" kit. 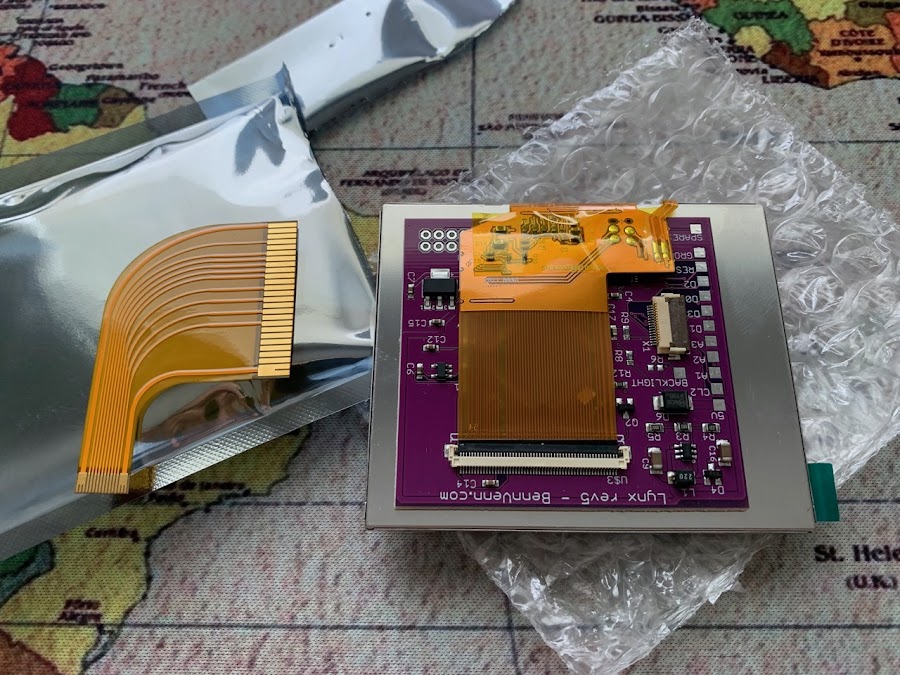 This is more clearly visible in a side-by-side comparison of the actual rev5 and rev6 boards... 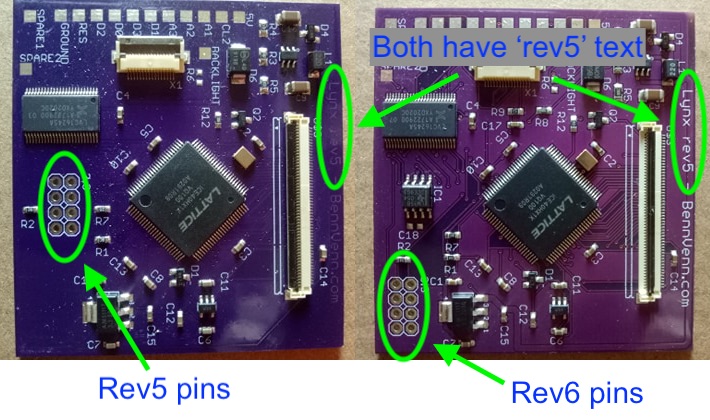 Opening up the Lynx🕸

Opening up the Lynx is fairly trivial. First remove the rubber grips from the bottom (a flat screwdriver is ok just be sure not to damage the plastic case). Then take off the battery cover. The four screws that are under the rubber grips can be removed using a Phillips-head screwdriver. Separate the two halves of the case - there are some notches around the case that hold it together so you may need to pry them apart. There's a single screw to remove inside the battery compartment next. 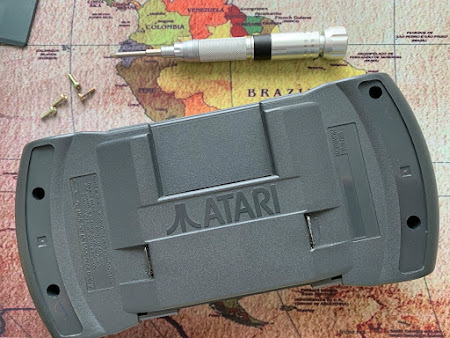 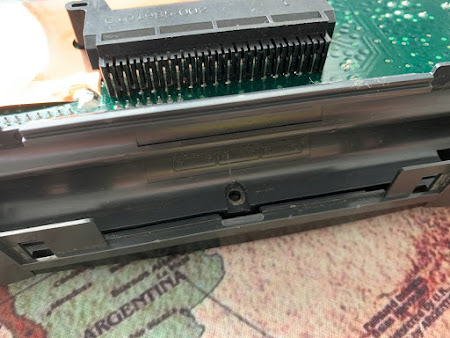 Using a flat screwdriver, undo the locking mechanism on the two ribbon cables running to the motherboard. Then, you can disconnect the ribbon cables, screen power and speaker connectors and take the motherboard out. It is very important to have the locking locking gate fully open, especially on the grey joystick/button ribbon, before attempting to remove this ribbon. 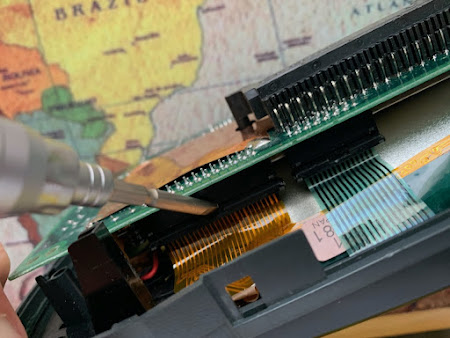 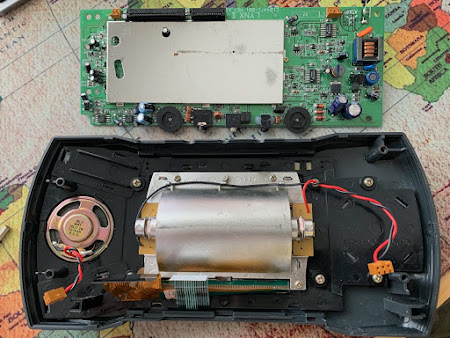 Remove the four screws that hold the original screen in place, position the new LCD and the Atari Gamer mounting bracket as in the photo and using the original screws, secure it all in place. Don't over-tighten the screws. 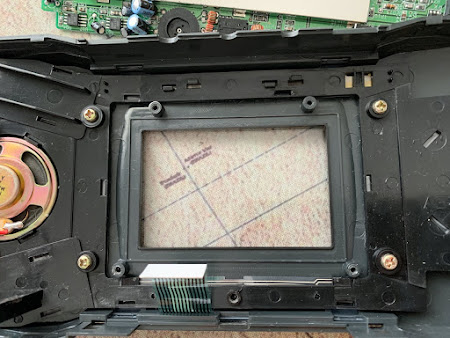 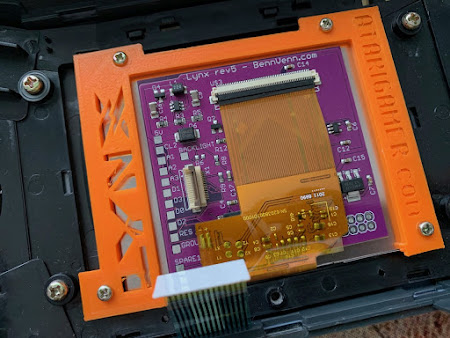 Before moving onto the next steps be sure to flip the front of the case over and check that the metal surround of the LCD is not visible, if it is, untighten those four screws and reposition the LCD, then tighten them again. For reference - in the photo below the metal surround is visible on the right hand side. 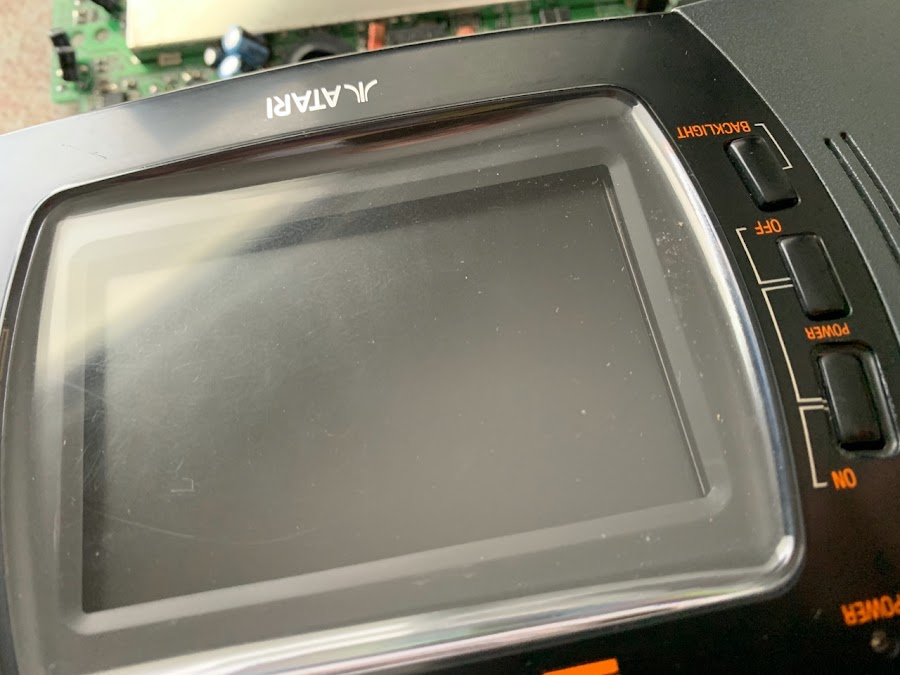 Now turn your attention to the motherboard and find the blue L17 coil. Using a flat screwdriver and side cutters, remove this coil to disable the high voltage circuit for the original screen's backlight. The screwdriver can be used to lift the coil and the side cutters to cut its two legs off. You won't need this coil again. 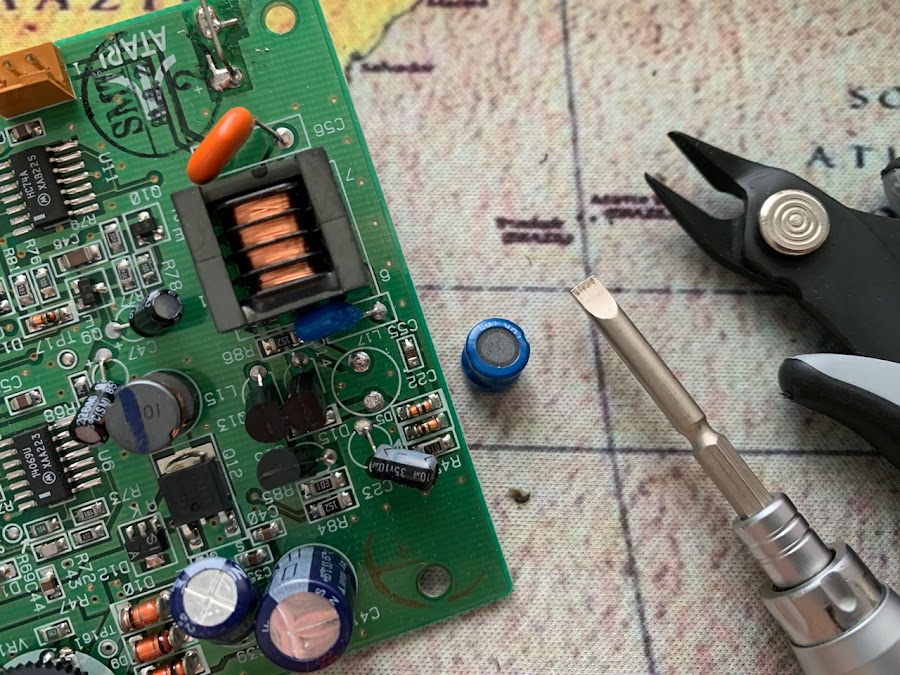 Now it's time to connect the ribbons. The first ribbon you should connect is the one supplied with the LCD kit. Pay attention to the orientation of this ribbon cable - you will not get any picture on the LCD if it's the wrong way around. Connect the motherboard side first (as pictured). Be sure to push it in firmly and then lock it into place. Once it's locked in, you should see the fingers sticking up slightly above the socket but it should not be possible to pull the ribbon out of the socket. 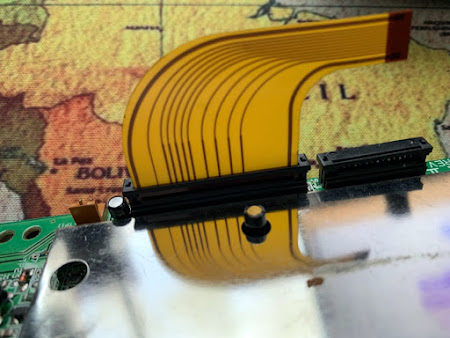 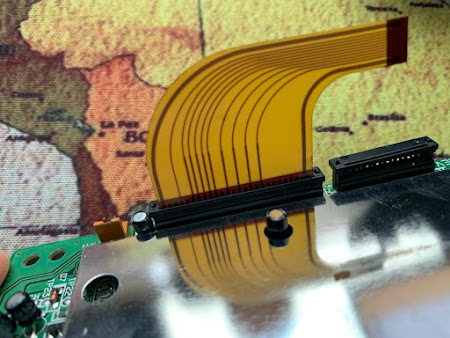 Next reconnect the grey joystick/key ribbon cable and lock it into place and position the motherboard so that it's ready to be closed into the case. Before positioning the motherboard onto the screw alignment pins, connect the other end of the LCD ribbon cable to the LCD PCB. Be sure to unlock the connector on the back of the LCD first by flipping the locking mechanism up. You may need to perform some finger contortions to get it all to line up, but once aligned it should come together easily. Lock the ribbon in place. 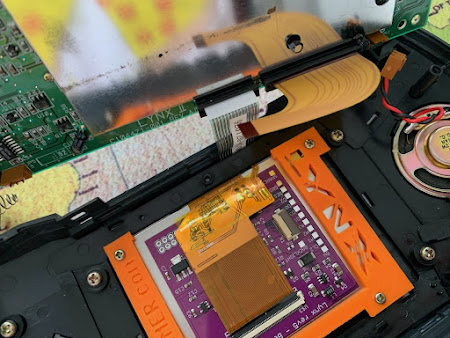 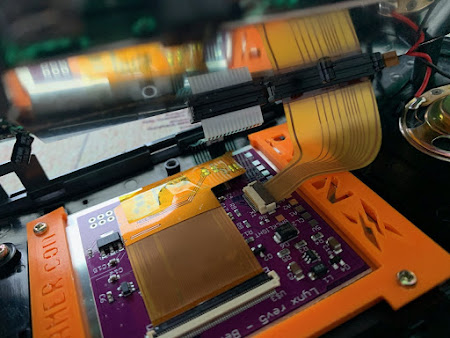 Before re-assembling the Lynx, insert a cartridge and connect power to check that everything is powering on as expected. You don't have to connect the speaker at this point but it's probably a good idea to anyway. 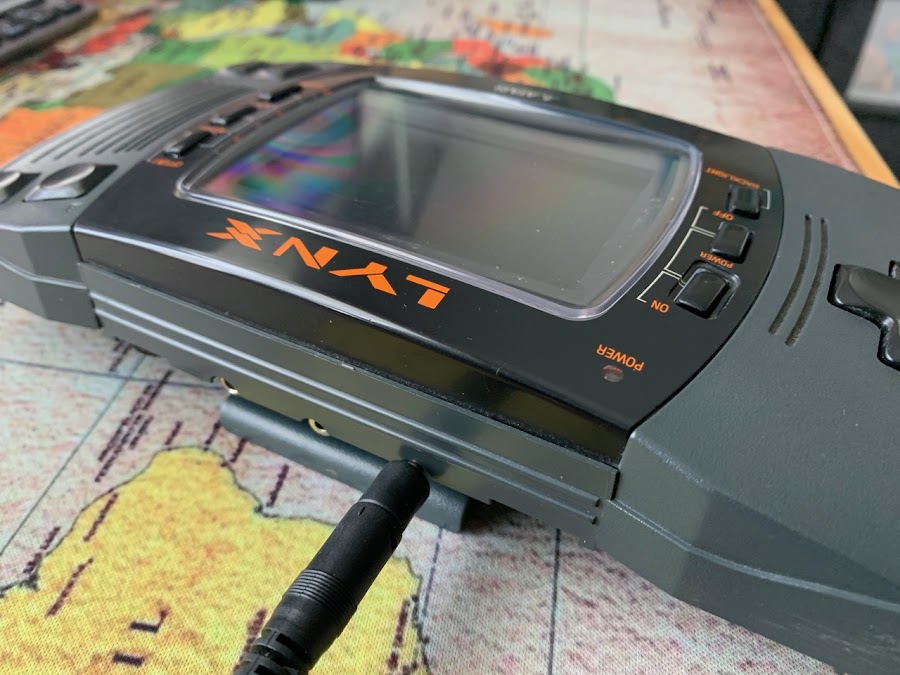 Check that the brightness wheel does indeed adjust the brightness of the LCD. BV noted that not all Lynx models will completely black out the screen at the lowest brightness setting (our's didn't). You will also notice that the min/max positions are reversed compared to the Lynx's original screen. The maximum setting on the wheel is the dimmest on this LCD kit, and the dimmest wheel setting makes the LCD its brightest. 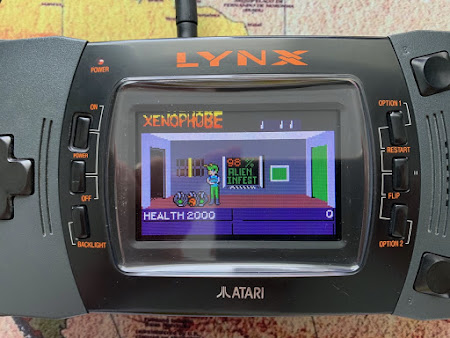 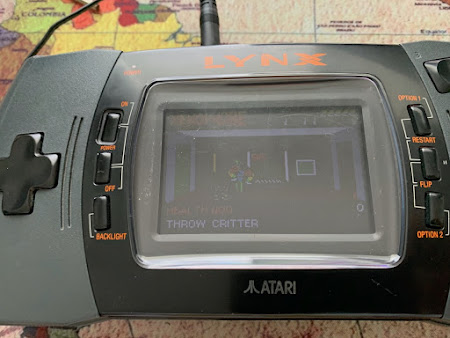 Here's a short video showing the brightness wheel in action. Excuse the poor quality and automatic brightness adjustment in the video, it was shot on an iPhone.

Once you confirm everything is working, re-assemble the Lynx by reversing the disassembly steps and you're done!

Scanlines and Other Errata🕸

This version of the kit supports the scaliness option but it requires soldering - just one wire though. To see how to get that connected, follow the installation instructions from an earlier version of the kit and hook up the backlight wire only. This will allow you to control scanlines on/off by holding the backlight button on the Lynx. At the same time the brightness can be adjusted by pressing this button, even if the wheel is being used.

If your wheel is broken or missing you can disable brightness control via the wheel by removing the R8 resistor from the back of the LCD board.

So where to get it? At BennVenn's store of course - LYNX II SOLDERLESS DROP IN LCD KIT - INFINITE BACKLIGHT CONTROL - PRE ORDER - REVISION6. The kit costs $65USD.

Update: There is a version of the LCD kit that now supports this motherboard version. You can read more about it on this news post: BennVenn adds support for the Atari Lynx C104129-001 motherboard to his LCD kit.

-AG
Tags: Benn Venn, Hardware Mods, LCD Mod
♥ Did we get something wrong or you have something to contribute? Please tell us about it!
Did you like what you just read? Please take a moment to see how you can support Atari Gamer. With your help we can keep this retro gaming website going and develop new content! Or just check out what else we have for you...
You can find Atari Gamer on...
Be sure to follow for the latest Atari Lynx news, updates, stories and photos!
[ Don't show again ][ Dismiss ]
Loading...
10
Close