Although it was originally released in 2009, Zaku has resurfaced again in 2018 with a re-release, bringing the total number of copies sold to 1000. If you haven't heard of Zaku yet, go over and read the review and check out the unboxing article before you read further. Now, Zaku is a game, but Super Fighter Team is the publisher that made it all possible. In this article, we'll be talking to SFT about Zaku, Atari Lynx home brews and related banter.

So lets jump right in!

Care to tell us who you are, and why we're interviewing you?

I'm here to discuss Zaku, our super-de-duper shooter for the Atari Lynx.

Oh yeah! So how did Zaku come about, anyway?

PenguiNet wanted to develop a game for an old handheld system, initially targeting the black and white Game Boy. But when docs and tools proved sparse, focus shifted over to the Lynx which had a fertile development community already established.

A simple, early demo was produced, which caught my affection. I contacted PenguiNet to arrange a production and publishing deal, and...six years later we had a finished product ready to go.

It's been 9 years since the initial release of Zaku, what took so long for the second release and how do you feel that it's finally out?

Zaku sold 600 copies initially, but it took a while. That's to be expected with a system like the Lynx, where so few machines were ever sold compared to the other platforms we've released commercial products for: Sega Mega Drive and Super Nintendo. No one before us had ever managed to move 600 units of a new Lynx game, so what we did with Zaku was unheard of. Going back for more was just loony, according to many. But I took a gamble on it because it seemed there was a lot of demand, and we actually managed to sell through the new stock of 400 more quickly than before. Cool!

I'm always happy when a game ships. I know our customers are looking forward to playing it, and that gives me some extra pep.

Added to which, the Lynx is a machine I've always been awed by. So the fact that we published a real humdinger of a game for it makes me feel a good deal of personal satisfaction.

When this re-release of Zaku was shipping, you said that these last 400 copies would be the very last to be produced ever...do you really mean that?

I don't make matter-of-fact statements lightly. So when I said "We're done at the 1,000 unit mark," I meant it. But as soon as the game sold out again, my inbox began exploding with people saying, "I want Zaku!!" There's something about the charm and appeal of this game, and of the Lynx itself, that keeps bringing people back for another round. It's...a pretty cool problem to have.

Best thing people can do is shoot us an e-mail if they want a copy of the game. That way, we can add them to our mailing list and get in touch should the game ever go back into production.

Umm so what's up with all those crazy doodles on each of the boxes and the packaging? It's a nice touch but how did you ever come up with the idea?

If I'm in a good enough mood, and feeling particularly inspired, there's a chance I may decide to doodle a little "comic" on the back of certain customers' shipping parcels. Said "inspiration" is generally sparked by the customer's name, or street address, country, etc., though sometimes it's just some random idea that pops into my head as I'm spacing out while packing the game.

I don't think anything of the doodles. I'm just a creative guy, quick to come up with something zany. My friends and family dig on my goofy little cartoons, and I smile when I think some of our customers might enjoy being surprised by them. It's not a gimmick or anything, it's just me having fun, trying to take a bit of the monotony out of the work.

Osman Celimli is the "big cheese" of PenguiNet, and the "father" of Zaku. He and I became good friends over the course of the game's development. It was a fun, loony process, especially for me because I wasn't the one doing the programming! We pitched a lot of ideas back and forth, made far too many corny jokes, and bonded over some of life's greatest luxuries: Apple II computers, Soviet cartoons, and the Super A'can, to name a few.

We're still in touch and he's doing super; working on some of his own new stuff that I wish him great luck with!

Tell us how the curved lip carts for Zaku came about...

I told Osman that we'd only publish Zaku if we could do it in the proper way: and to me, proper meant real "curved lip" game cards. But...ha!! Silly me, no one made them anymore. So we made them ourselves!

I happily overpaid for a new, sealed copy of the poop-tastic Ninja Gaiden III, just so I could tear open the plastic wrap and box, and have the virginal game card within subjected to poking, prodding, and indelicate disassembly, in the aim of cloning the design for our own use. And so, if I may say so myself: From the ashes of a terrible Lynx game rose one of its finest.

What was Zaku developed on and where's that hardware now?

The devkit was an official one, consisting of an Amiga 2000 and all the fixin's. Osman and I went in on it 50/50 to buy it from another developer, and it was resold after Zaku shipped. I wager the whole kit -- minus kaboodle, which was trounced by the French post -- is now languishing in a collector's display case.

Zaku is the only SFT published game for the Atari Lynx. Have you had other developers approach you to publish their games and what's the criteria that a game must meet before you publish it?

Developers are always invited to pitch us their projects. We've been rockin' this niche market since '04. We know what's hip and how to get that hipness out there. Word.

To be considered for publishing, a game has to hit me a certain way. It's got to have the quality and appeal that a "big name" publisher would have expected back when these game systems were at their peak in the '80s and '90s. 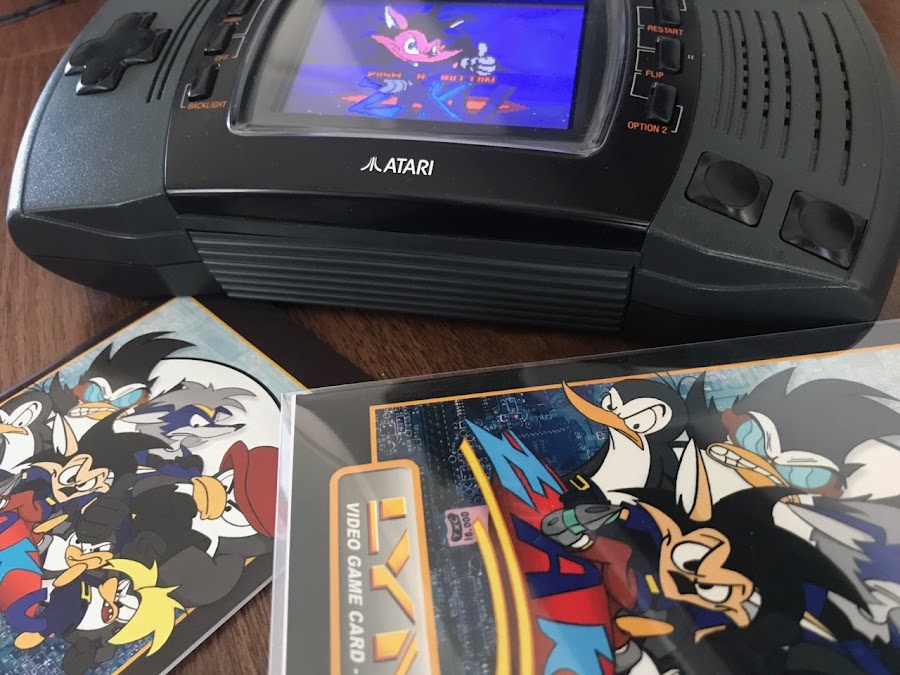 Would you do another Atari Lynx project?

It'd be dandy to work on another Lynx game. I'd welcome the opportunity.

What do you think of the Atari Lynx (homebrew) scene in 2018 and the increasing use of the 3D printed carts?

Beats the pants off the Tiger game.com scene! 3D printing is bush league, but it beats the hell outta those oogly-arse bare circuit boards people were doing before!

Believe in yourself, and in your project. If you need support, seek out people who provide it wholeheartedly. Don't get discouraged by would-be detractors: They're just jealous. If you love what you're doing, let that love inspire you to make your best effort.

I'm sure you've seen the Lynx SD cartridge, do you think that has any/much impact on sales of home brew titles (either positive or negative impact)?

Whether or not it's the original supplier's intention, those kinds of tools always end up aiding and abetting piracy. You hear that, devs? Don't skimp on the copy protection!

Thing is though, the Lynx community, for the most part, seems to be pretty honest and anti-pirate. That's admirable. And such integrity generally makes developers more confident to supply new software without fear of immediately getting burned. Don't bite the hand that feeds you if you want a full stomach. Simple.

There's been a spade of eBay flippers recently who have been buying games like Zaku and some other more 'rare' releases and re-selling on eBay at 3-5 times the purchase price. What do you have to say to them?

I'd like to wring their necks. I wish I had a sort of "Spidey-sense" to determine when one of our customers is a scalper, so I could refund their money and tell 'em to go jump in a lake. We're doing this to support gamers, not greedmongers.

You know, when we were first selling Beggar Prince back in '06, I used to go on eBay myself and fight these bastards? I'd contact all their bidders and tell them they were being hoodwinked, because we were selling the game far cheaper direct from our website. And you know something? Most of the bidders cancelled their bids, thanked me, and bought from us instead. But, eBay has long since changed things up, much to my annoyance and the scalpers' benefit.

Yes: Try out Super Fighter Special Edition, and the two Sango Fighter games (1 and 2). They can all be downloaded FOR FREE from superfighter.com because we love them so very much and want the world to enjoy them!

Thanks for your interest in our company and what we do.

-AG
Tags: Interview, Super Fighter Team, Zaku
♥ Did we get something wrong or you have something to contribute? Please tell us about it!
You can find Atari Gamer on...
Be sure to follow for the latest Atari Lynx news, updates, stories and photos!
[ Don't show again ][ Dismiss ]
Loading...
10
Close