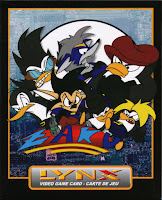 Okay... this is one game that got Lynx fans very excited when it was announced. And now that it's released, they are even more excited! 'Zaku' is a side-scrolling shoot 'em up featuring one of the cutest heroes seen on the Lynx... Zaku! Plus a couple of mischievous penguins, who are up to no good... and their robotic hordes! Can you control Zaku through the skies across several diverse levels and defeat this penguin scourge once and for all?

'Zaku' is a game that appears to nod its head at some classic, well-known games. Fans of the Turbografx title 'Air Zonk', for example, will feel very much at home with 'Zaku', and the individual personalities of bosses (plus the free selection of different stages) hearkens back to the Super Nintendo 'Mega Man X' series. Whether these earlier titles had any influence on 'Zaku' is anyone's guess, but one thing is for sure: 'Zaku' is it's own wonderful, entertaining little game with style and character in absolute spades. I would happily sit 'Zaku' alongside 'Air Zonk' and 'Megaman X' in the quality stakes. It really is that good.

The visuals in this game, to start with, are phenomenal. A lot of hard work went into these graphics, from the intro screens, title animations to all the main gaming action. The appearance of the gorgeously drawn and huge animated sprites against the detailed parallax backdrops is truly startling... in a good way! You'd have to go back to 'Shadow of the Beast' to see multi-layered background parallax done this well. Some stages even feature water you can dive into, with authentic water splashes!

In terms of sprites, the robots and assorted creatures you face are brilliantly endearing. Huge beret wearing penguins, businessmen fish, toasters (!), spitting eels, charging octopi... I certainly don't want to spoil anything here. And 'Zaku' herself is full of personality; she concentrates, she looks dazed at the 'game over' screen, she grins through all that's thrown at her... it's unreal. I'd go as far as to say 'Zaku' would be an excellent choice for a future Lynx mascot... the 'Sonic' or 'Mario' of the Atari Lynx, if you will. Who's with me?!

Soundwise, 'Zaku' is pretty good. It's definitely not the greatest audio experience on the Lynx, but it's not bad at all either. There are some nice little tunes, each with their own style, and they compliment the action of the game very well. The most important factor needed for this kind of game was that music should match the pacing; and that it does, without ever grating.

What really stood out to me, though, were the sound effects. Some of these audio sounds are excitingly unfamiliar, and include many complex, technological-sounding bleeps and whirs. I kept my volume way up to appreciate them, the way they should be heard! Don’t forget to also check out the ‘sound test’ function too - a great little addition in the option screen we rarely see in portable games.

As for the controls, 'Zaku' is intuitive and easy to get used to. Firing the regular weapon involves holding down one main button with your thumb, whilst the other button charges a super blast and activates your shield power. The "Option 1" button shoots a backwards jet flame. Personally, I would have preferred this jet flame was always activated, so I could reverse into enemies a la 'Gates of Zendocon', but with me being the gamer and not the designer, "users can't be choosers" I guess! Collision detection is excellent, by the way - which is so important for a shooter.

The only criticism I heard about this game, before playing it, was that it was "too easy". I definitely did not have this experience. Even though there are infinite continues, this game is H-A-R-D! There are foes everywhere, bullets flying, and the bosses are way tougher than regular foes (as they should be). Plus, if you find the game too easy, you can always adjust the difficulty on the options screen, and the hardest two difficulty choices are REALLY tough. Having no passwords is the right choice for this game. At its heart, this is an arcade title; so the challenge bar should be set high, which it is.

Overall, 'Zaku' truly surprised me with its "crafted with care" quality and it's sheer exuberance. This is a vibrant, exciting game that would have really sent the Lynx to the next level if it were an official title in the 90's. Just like aftermarket title 'Alpine Games', 'Zaku' manages to push the envelope graphically as well as present something vividly new. PenguiNet has a right to be proud of what they've created here; after repeated plays, I can honestly say that 'Zaku' deserves a place among the top Lynx games on the system. Who'd have thought that an aftermarket title could stand tall next to the Atari Lynx gaming classics?