Scrolling beat ‘em ups... the Lynx has a few of ‘em! But there are two very prominent and classic titles on the Atari Lynx that fit that description perfectly; ‘Ninja Gaiden’ and ‘Double Dragon’. So which one is better? That’s what game battles are all about! It’s Ryu the ninja versus Billy the fighter. Let’s see who wins in this rage ‘n the cage! 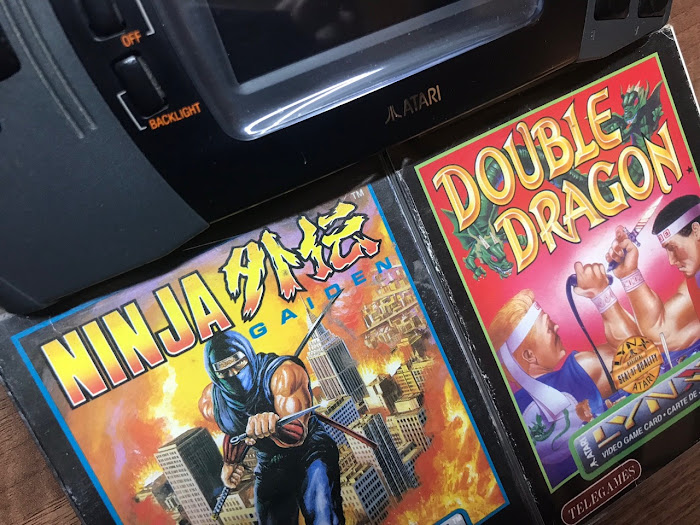 ‘Ninja Gaiden’ has some spectacular graphics, from the detailed (and smoothly animated) sprites to the lush background textures. It’s authentic to the original arcade game. But ‘Double Dragon’ has one important edge over that game; sprite size. The visuals in ‘Double Dragon’ look almost identical to the arcade and the characters are big, big, big! No detail is ever hard to see, whereas power-ups in ‘Ninja Gaiden’ are often very small. ‘Double Dragon’ is overall pretty stunning in the graphics department, as good as ‘Ninja Gaiden’ looks. 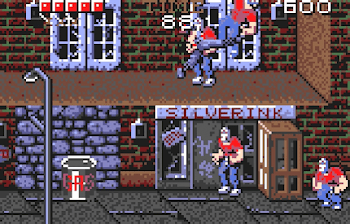 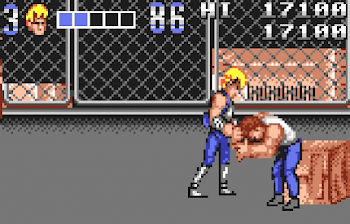 You will recognise the themes of ‘Double Dragon’ instantly, but not all the themes are well done. And the worst part about ‘Double Dragon’ in terms of audio is that the sound effects (particularly impact sounds) are really unsuitable for this game. That’s not the case in ‘Ninja Gaiden’ though; every track is memorable, every sound effect seems appropriate, and one specific feature takes the award easily; boss-specific music! If you need convincing, listen to the transition from the “Level 1” track to the “Level 1” sumo boss confrontation; truly epic!

‘Double Dragon’ often feels awkward in the controls department. Special moves are not always easy to pull off, and there’s a level of preciseness needed which is difficult in the heat of a scrap. ‘Ninja Gaiden’, on the other hand, is extremely responsive and easy to control. And it’s way more versatile. Climb poles, do monkey-bars, flip, vault, perform an aerial throw, swing a sword... these are all easily done, and there are even more moves to perform aside from these!

It’s a Game Battle first - a “tie” in a category! Why? Because both games are about equal in their challenge. This is because they have around the same amount of levels, the same amount of enemies, the same opportunities for weapon usage. They don’t have all the levels of the original games, and are over WAY too quick if you’re an experienced scrolling beat ‘em up fan. But both games are gems, worth playing for a lengthy period!

Sorry ‘Double Dragon’, but you just aren’t fast enough to compete with Ryu... the main issue with ‘Double Dragon’ is the slow, formulaic approach. ‘Ninja Gaiden’, on the other hand, is speedier and features a lot of “interest points” to break up the action; foes with huge gloves, tree log carrying enemies, gymnastic challenges, cut-scenes and more varied surroundings. Fans of ‘Double Dragon’ will be pleased that the mechanics of the original game are preserved on the Lynx, but ‘Ninja Gaiden’ fans will be impressed that they managed to even fit what is arguably a more complex title on the handheld.

The final shuriken has been thrown, hitting the bullseye of the Game Battle target range. That means Billy’s thrown baseball bat wasn’t strong enough this time, clattering to the ground. ‘Ninja Gaiden’ wins the battle!

For newcomers - a fun fact. Did you know there is another Ninja Gaiden title on the Lynx, called ‘ Ninja Gaiden III: The Ancient Ship of Doom’? It’s the third part of what was a classic ‘Ninja Gaiden’ platforming trilogy, which was seen on various other platforms aside from the Lynx (NES, PC, etc). It has no similarity to the other Lynx ‘Ninja Gaiden’ title whatsoever, except for the same main character (who retains a visual similarity). You can read more about THAT game on this site as well; so check it out!

That’s another Game Battle award ready for the trophy cabinet! By the way, don’t forget to check out the other game battles - who will win? Maybe it will be your favourite game. Catch you next time!