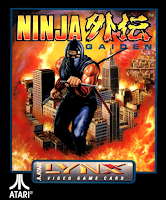 Thwack! Smack! Thump! That’s the sound of ‘Ninja Gaiden’, one of the premier scrolling beat ‘em ups that landed on the Lynx early in the booming days of this system! “But hang on”, you may say...”Isn’t this Ninja Gaiden just part of that platformer ‘slash ‘em up’ series? You know, the one that landed on PC and other consoles, including the third one found on the Lynx?” The answer is, yes, it is part of the same Ninja Gaiden series - only it is the arcade edition! Yep, way back in time, there was an arcade coin op version of ‘Ninja Gaiden’ that functioned a lot like Double Dragon. And amazingly, it was this version that was translated onto the Lynx as one of its earliest releases!

First up: forget all you know about the rest of the Ninja Gaiden series when you play this one. Those old skills won’t help you here! Ninja Gaiden for the Lynx is a fighting game, complete with a blue ninja hero, plenty of weird foes, stunt acrobatic props and plenty of scenery to smash. Your goal is to guide Ryu the ninja through several dangerous stages until you reach the big boss, who you must take out. The plot is a bit more intricate than that, but not so engrossing that it distracts you from the biffo. Basically, you fight your way to the end, however you can; and then you’ve won the game!

One of the first things that hits you in Ninja Gaiden is the stunning graphics. This is no ordinary scrolling beat ‘em up. There are crisp introductory screens, interlude graphics, and even a nightmarish animation that appears when you die and need to use a ‘continue’. Alright, it’s a giant circular saw over your ninja, which will stop or descend on him depending on whether you keep playing - so, um, choose wisely!

The in-game graphics are beautiful, when there are few enemies around to admire them. Ryu fights his way through shattered, dirty towns...shopping arcades...abandoned environments with postered walls...and much more. Obstacles are clear, and collision detection is excellent. In terms of sprites, Ryu himself is a vibrant blue and easy to see in the ensuing action. A good thing, because there are enemies everywhere, with many being extremely freaky looking. Case in point: ‘Double Dragon’ may have had huge brawlers, but I’ve never come across morbidly obese bearded men carrying tree logs! Cooler are the enemy ninjas, who move and act just as you do, and the strange masked assassins who frequent most of the levels. The bosses are also very charismatic and are even stranger to look at. There’s certainly a lot for the eyes to see, and that’s a very good thing.

Controlling Ryu is mostly an easy affair, apart from a few odd dynamics that take some time getting used to. Your ninja can punch, low kick and high kick (one button) and the other button jumps. This jump can be executed either forward (combined with an aerial enemy throw if you like) or you can take your hand off the d-pad and execute a ‘vaulting’ jump, which can propel you to higher plateaus in the scenery. Watch it, the enemies will follow you! Pressing ‘Option 1’ under lamp posts or other objects will allow you to grab them and execute hanging kicks; a cool feature that is sadly underused. Thumping or throwing a foe into breakable scenery can sometimes yield special items, including a nifty ninja sword that does huge damage. Knocking your enemies off the edge of precipices is the easiest way to progress, but they’ll try to do the same to you!

Sound-wise, Ninja Gaiden is pretty good. Not astounding, but generally strong. Unlike ‘Double Dragon’, punches and other effects sound impactful, and each level has its own music. Even better, bosses also have their own music, and these themes are the best of all. Crates explode, swords hum and giant logs swing...sorry, just can’t get over that particular foe. I mean, surely there’s a better weapon out there than a dead tree!

Speaking of dead, expect to cark it more than a few times in this game: Ninja Gaiden has some tough foes, and they can be a bit tricky in their movement too. Don’t expect the rival ninjas to NOT use those metal bars they’re swinging on to kick you off a building! Thankfully, you are able to select the number of lives you’re given at the beginning of the game. Which is great, because you can set yourself a real challenge if you want.

In giving a final rating to this game, I have some considerations that are worth mentioning. Firstly, there are missing elements to the Lynx port of Ninja Gaiden that were present in the coin op arcade. Which is a shame, because the game could have used a bit more content. I wouldn’t have even minded more special moves or more enemies, but I guess that’s the designer decision a game company must make between (1) faithfulness to the arcade, or (2) inserting fresh elements and hoping it doesn’t put off purists. If you’re an advanced scrolling beat ‘em up player like me, you’re going to complete this game fast, but you’ll have a blast along the way!

Overall, Ninja Gaiden is likely the Lynx’s best scrolling beat ‘em up, with the possible exception of platformer/scrapper ‘Batman Returns’ (though I fall on the Ninja Gaiden side in that argument). Yes, I put Ninja Gaiden above ‘Double Dragon’ too. I gotta say, it’s fun, it looks good, it sounds great, and if you make it a challenge it will last the distance. It’s not for everyone; you really have to like this genre to truly enjoy it. But with a multitude of power-ups, foes, attacks, bosses and unique scenes, it’s hard not to shuriken this cart straight into your Lynx right now and get brawlin’!