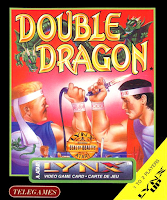 Probably the most well known scrolling beat 'em up of all time is 'Double Dragon'. The game has spawned a huge number of sequels, a one-on-one fighter, and also a recent Steam PC game ('Double Dragon Neon'). The Lynx port takes the game to where it ALL began, with a conversion of the original arcade fighter from many eons ago. The goal? To rescue your girlfriend, who was kidnapped by a machine gun wielding maniac, using only your feet and fists; oh, and a number of weapons found along the way. Appearing late in the "offical game" era of the Lynx, 'Double Dragon' came as a surprise release for many, who never thought the title would see the light of day on the Lynx. It even went on to become a fairly rare and high value game to find. So, with all this information in mind, let's launch into the review!

Graphically, the first thing you notice is that the game designers could not have got the visual quality of the game more correct. This thing looks like the arcade, from the main sprite appearance (Hey Billy!) to the opposing sprites (including the big bruisers). And all these sprites are HUGE! It's easy to get shocked at the size of the in-game characters when you consider the various console ports of (different) Double Dragon games seen on PC, Super Nintendo and even the NES. This means, of course, that everything is easy to see on your Lynx as you walk along the streets, forests and factories of 'Double Dragon'. Because your sprite is so big, the game needs to scroll up and down a lot; thankfully, this works just fine, and is never detrimental to the game. Footpaths, ladders, manipulatable items... all are easy to see. And hey, you'll recognise some old foes! The whip wielding lady is here, as well as the usual brown haired grunts. And you can still grab their weapons when they drop them!

Sound-wise? 'Double Dragon' satisfyingly retains the series musical themes in each of the levels you visit, and this is great for Double Dragon retro buffs. The Lynx does a fine job of translating the classic tunes, and they are pretty good versions when all is said and done. There is no use of voice, which is a bit disappointing; it's something that you saw in different versions of Double Dragon games and could have easily fit in here. The most disappointing thing you will hear is the impact of your attacks. I mean... it's like a wet sock hitting a pile of paper, only lighter. It's a really bizarre sound choice given the audio palette that the Lynx is capable of. It's probably my biggest gripe when it comes to what you hear coming out of the speakers. By and large, the quality of sound you get in 'Double Dragon' is pretty respectful to the original source, and this is a big plus.

Moving your angry fighting guy around is fairly easy. He moves at a strolling kind of pace, and the attacks and special moves are fairly easy to carry out. You can do elbows, throws, punches, kicks... the arcade moves have been retained. What is weird is the way that your character jumps or executes jumping kicks. These moves are almost unneeded in the big scheme of the game, as they expose you to attacks from all sides after using them (a problem in other 'Double Dragon' translations as well). The only real time you need to use the jump is when you need to leap across a bridge gap. Otherwise, it should just sit idle in your arsenal, to be honest. Weapons are also easy to pick up with the attack button and then use. Every so often, you'll find scenery you can climb, a really fun tactic used far too little. It's this kind of variety that 'Double Dragon' could've used a lot more of.

There are two negative issues with this game mainly: the nature of the gameplay, and the difficulty. Age-wise, this is a game that was released at the arcade in 1987, and in 1993 on the Atari Lynx. It shows. Between this time there was already Double Dragon 2, 3 and even Super Double Dragon on the SNES. If you can see where I'm going with this, I'm basically saying that the game feels pretty old; why couldn't we have one of the later editions, which sharpened the game and made it even better? You can also largely complete the game using just the punch, without needing any special moves. To me, the Lynx scrolling beat 'em up 'Ninja Gaiden' is faster, more recent, more impactful and more challenging. You can just feel the difference, in my view.

Also, in terms of difficulty, I completed 'Double Dragon' within one hour. That is, as soon as I bought it. That did not bode well with me. Even with adjustable the difficulty, and a practice mode, 'Double Dragon' doesn't give practiced players a huge challenge. There's nothing really to finish here once it is over. The only thing you'll really be thinking about is whether they could have packed more challenge into this game, or at least added more levels. I'm a big fan of 'Double Dragon' and I must say that this game just felt like it needed a spit-polish with some more options, increased content and further variety.

That said, though, if you are a Lynx fan with a huge interest in 'Double Dragon' or arcade conversions, you'll find this game to be a fairly satisfying version of the original game. A lot of the original set pieces are there. It's just that, when it all comes down to it, the sequels to this game built a lot on the deficiencies of the original, and so what you get there is the oldest package of the game. And unlike the arcade game, you could find it really easy to complete. For these reasons, it seems appropriate to give this game a pass grade of C; but not by a huge amount. It kind of scrapes in that score. Overall, it looks good, sounds good, but plays mediocre and not anywhere near for long enough. Stick to 'Ninja Gaiden'.