Who doesn't like a good space epic? Just mention "sci fi" and "outer space" to me and you'll have my (limited) undivided attention... until it's time to look down at my Lynx and finish my game! So what games are up for a battle today? It's the great 'Zarlor Mercenary' and the fearsome 'Gates of Zendocon'. It's shaping up to be a shuttle-based war of lasers, missiles and photon bombs. So, grab your popcorn, get under your blast-proof dome of space glass and watch the interplanetary dogfight! 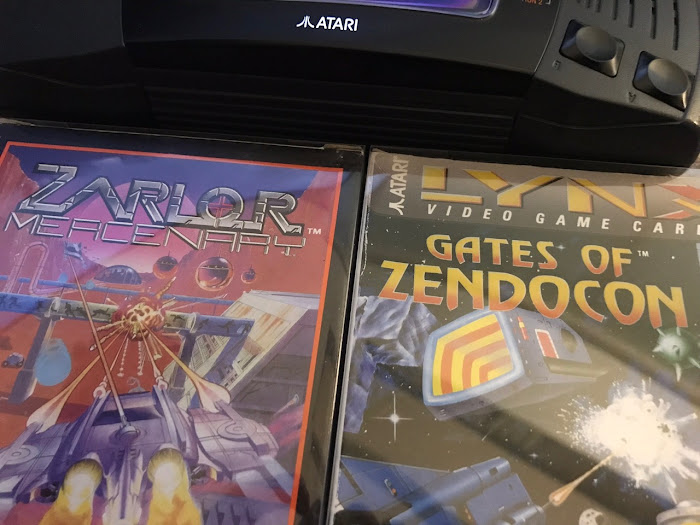 'Zarlor Mercenary' is a truly impressive title when it comes to graphics, but 'Gates of Zendocon' actually comes away as the more visually impressive game. From the bizarre aliens to the oozing walls, 'Gates of Zendocon' has a style all of its own, and constantly surprises the player with little graphical nuances on each level. There's nothing more freaky than a plant that grows flowers which then detach themselves to attack the player! The spaceship, the backgrounds and the terrific cutscenes are impressively sci-fi, which space fans should find very endearing. Brilliant stuff. 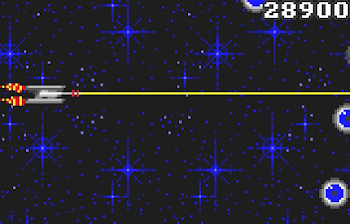 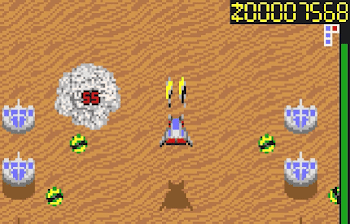 'Gates of Zendocon' has a series of terrific tracks, but one or two of them decrease the overall quality of the audio. Yes, that one with the accordion in particular. :) However, 'Zarlor Mercenary' just screams winner with every sound effect and galactic tune. The effects in particular are noteworthy; rather than being purely about explosions, there are some excellent power-up tones, laser zaps and militaristic tracks. Though I should say, 'Gates of Zendocon' does have some pretty enjoyable alien sounds: such as the spider Zendocon's comically sinister laugh!

This is a close call, but 'Zarlor Mercenary' hits first place because of the control options. You have multiple characters to select, which means your buttons are going to be doing different things depending on your character. Namely, one character will have massive firepower, whilst the other might have super speed or have wing-mounted cannons to deal with surrounding foes. 'Gates of Zendocon' does have a fairly nice control scheme, but the ships in 'Zarlor Mercenary' handle just a little bit cleaner. It's nice that 'Zarlor Mercenary' has a separate button for your main gun as well as your laser as well. This is not the case in 'Gates of Zendocon'; all weapons fire at once, so you have to stop and start your laser in order to shoot another photon bomb.

'Zarlor Mercenary' is the winner playability-wise because it truly challenges the player, and puts ship design totally in YOUR control. If there's one thing that 'Gates of Zendocon' has that 'Zarlor Mercenary' doesn't, it's the truly fantastic "helpful aliens", who advance your weaponry. But these are found far too little throughout the game. The alien allies are, to me, is one of the game's biggest features and fun factors - so why couldn't they appear on more occasions? As fun as 'Gates of Zendocon' is, there are just a few too many levels which have a samey presentation and design; though it must be said, there are bursts of amazing imagination throughout. In the concluding thought process, 'Zarlor Mercenary' becomes the more enjoyable title as a whole. It just scores too highly in every rated area within the game review.

So there you have it - another game battle done and dusted! 'Zarlor Mercenary' is the victor today. But it must be said, these are both high quality Lynx titles that are well worth your time, especially if you have a soft spot for space shuttles, intergalactic cities and weird alien wildlife. Both games certainly have many fans.

Of course, if you like space-themed games, don't forget that the Lynx has many other titles to explore; try 'Super Asteroids / Missile Command' and 'Zaku' just for starters!

Time to jetstream out of this galaxy - see you next time, Lynx fans!