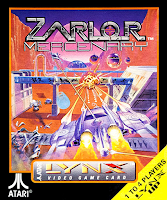 I thought the Lynx game ‘Gates of Zendocon’ had an odd name until I came across ‘Zarlor Mercenary’. And funnily enough, this is another space shooter, which puts you in control of a craft with some epic weaponry. But unlike ‘Gates of Zendocon’ which is about escaping the galaxy, ‘Zarlor Mercenary’ is about blasting things for cash, and allows you to choose between a number of interesting looking “guns for hire”. Robots, humans, aliens...they are all caught up in this mercenary game. Choose your crazy and get gunnin’!

‘Zarlor Mercenary’ follows the great tradition of the “top-down” shooter; if you’ve ever played ‘Silpheed’ or ‘Raiden’ then you know what to expect here. Interestingly, ‘Raiden’ eventually found its way to Lynx too, but this title predates it by some years. The good news, though, is that this title stands on its own two feet (or rocket boosters).

‘Zarlor Mercenary’ is a NICE looking game. For top-down shooters, ‘Zarlor Mercenary’ stands pretty tall in the graphics department. In fact, in my view it’s visually better than ‘Raiden’, which already looks great in the graphics department. Everything from the buildings, the domes, the ships to the explosions look awesome. There’s been significant work done here, so big applause to the art department. Sometimes there is a bit of slow down when things get graphically heavy, but it’s not too often this occurs. And honestly, sometimes a laggy patch is a relief given the barrages of bullets that come at you every few screens!

Sonically, this title features some nice in-game music and strong sound effects. Granted, the effects are usually just explosions and laser fire, but it’s a relief to have a decent soundtrack as you play (something that could have helped games like ‘Power Factor’ and ‘Switchblade 2’ - and I know I’ve said that often but it’s true!) ‘Zarlor Mercenary’ could have been even better with some “in-spacecraft” speech but hey, you can’t have everything, right? Sometimes the sound effects drown out the music but most of the time it’s clear enough, and you can even turn it on or off if you like.

Controls of ‘Zarlor Mercenary’ are just great. It’s easy to fire your guns, use a laser or unleash a screen-clearing bomb. Every pilot in the game has a different key skill or weapon, which means you can play to your strengths. It also means you might progress for a while with one character, only to realise you could have progressed further if you had used a different one. There are literally bullets flying everywhere, so you need all your controlling skills to avoid them. There are rarely “cheap shots”, and it feels fair. Even when the odds are stacked against you.

The longevity of the game is actually extremely good. I haven’t come across such a well balanced shooter in some time. You actually feel challenged progressively, and even when you advance pretty far, it’s still hard enough to challenge you more. Only the really advanced shooter players will make it through this one, so you are definitely given something to aim for. As afore mentioned, the character choice may affect your progression, so consider the benefits of each of their strengths. Happily, in case you felt as if one character may be weaker than another, power-ups are dotted around the maps, and there are also shops between levels where you can buy extra firepower. These are well worth it! Destruction is money here. The more you blast during the game, the better weaponry you can afford.

In all, this is a stellar Lynx title with plenty of replay power and it’s difficult to master. The fact that I can’t find a lot negative with it is a pretty good sign it’s not too shabby! The great graphics are icing on the cake for a top playing “schmup”, and there’s plenty to occupy you here on a plane trip or a couch relaxation time. Buckle up - ‘Zarlor Mercenary’ awaits!