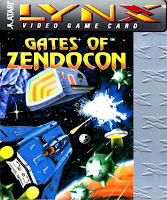 Weird name, eh? Also a kind of weird game! But the Lynx has its share of those! In this case, we have a side-on shooter title, packed with odd looking aliens and dangerous scenery. Lucky you have a killer spaceship with a few tricks up its sleeve, and some alien friends ready to help you on the way. So, strap in and get ready for lift-off! The ‘Gates of Zendocon’ awaits!

The plot of this game involves a giant demented alien spider that banishes you, the ship pilot, to wander the various dangerous galaxies and dimensions in your space craft, presumably to meet an early death. You, however, have other plans. By traversing the many ‘gates’ in the game, you try to finally find the right gate to lead you to the spider’s hideout, in order to defeat him face-to-face!

‘Gates of Zendocon’ is a really unique Lynx title. Most space shooters are fought top-down, with an upwards-scrolling screen (a la Lynx titles ‘Raiden’ and ‘Zarlor Mercenary’). Here, in this game, the ship faces to the right and the screen scrolls sideways; but you can also fly upwards or downwards. This means that what you are seeing in front of you is not always everything. You can manoeuvre your ship up or down to avoid damage, monsters or scenery, and to find anything interesting that might help your journey.

Graphically, ‘Gates of Zendocon’ shines. Sprites are bright, clean and clear. Some levels have spectacular detail. You’ll be blasting aliens in one level and dismantling giant digital blocks in the next. Some scenery even grows before your eyes! There are mini guardians, weird blobs, creatures that move in formation, and more. There’s also some impressive explosion effects and intricate visuals, particularly at the end of each stage where you can dock your ships for repairs (with some docks being booby trapped!) Really, the game is a visual feast for space fans. You’re never looking at an expanse of single colour for long; something strange is gonna appear to try and frag you!

Sound-wise, this game is also a triumph, at least in the sound effects department. Lasers zap, bombs are punchy, and bolts of electricity crackle. Explosions abound. The music is generally good, but there are one or two pretty horrid themes that drag the level enjoyment down a little bit. But no two levels generally have the same theme, so you won’t suffer for long! There’s not a lot to dislike here, even after extended play. And that’s a good thing!

Controlling your craft is also a dream. Holding down the shoot button creates a single laser beam, which you’ll use most of the time. Punching the same button instead releases a photon bomb, which drops diagonally downwards. If you get surrounded, hold down the other button for a handy shield, which protects you from most aliens and other spacecrafts. Lastly, your ship also has a jet flame out the back, which is very useful for mounting backwards attacks. Manoeuvring your ship is smooth, and the animation is nice enough. If you take damage, you’ll lose bits if your ship. First the shield goes. Then the laser goes! If you get hit again, the stumpy remains of your ship are fried; it’s game over man, game over!

Just as well ‘Gates of Zendocon’ has some fun tricks up its sleeve to give you a bit more firepower! One seriously cool thing about this game is the special alien friends that you can find imprisoned throughout the game; search carefully! The ‘Sonic Dart’ shoots sonar waves, and ‘Death Arising’ is a funny looking tower that laser strikes anything above you. There are two others I won’t reveal, but they’re both fun. Even better, they will travel with you through the gates (if you’re careful entering these gates) and they will accompany you until you lose a ship. Having all four fight with you at once makes you a crazy powerhouse and it’s very enjoyable.

Longevity-wise, ‘Gates of Zendocon’ is pretty challenging sometimes, but it’s not mind-wrenchingly tough to complete. It will pose a test for some players for sure, but for others, not so much. However, the main longevity factor is that you can’t reveal the whole game in each go. There are actually hidden gates, which lead to different zones and tougher challenges. For example, try missing the first gate in Level 1 and fighting on to the next gate. You’ll miss the easy levels if you enter it, and start the game with a much tougher challenge. It’s a great way to create replay value, and you’ll be able to discover newer and weirder planets and their inhabitants. Plus, at the beginning of the game, you can select the ‘easy’ or the ‘hard’ option for play. There are subtle differences as well, which is great.

So, with a fair few pluses to ‘Gates of Zendocon’, are there any weaknesses? Firstly, it must be said that this game is SLOW. Even playing on hard, your ship really creeps along. You can’t speed up the scrolling either. Shooting fans who want fast paced action may find the speed frustrating, even if they find lots to enjoy here. Also, advanced shooter fans may finish ‘easy’ mode in under two hours, so they won’t necessary play it too often after that unless they want to discover ALL the levels (or beat it on ‘hard’ which is actually a tough challenge!). The great thing is that there is a password system, so you can ‘play as you go’ and also note the codes of really interesting levels. For me, I just loved the alien cities. I’ve also seen other weird levels around the net that I never found, so I’m sure I haven’t played through all the gates yet!

In conclusion, I find ‘Gates of Zendocon’ to be a pretty decent shooter overall. Sure, it’s a bit slow in feel, and ‘easy’ mode won’t challenge everyone. But, it’s got some great graphics, fun sound, friendly aliens and strong gameplay; plus, awesome variety in levels and password integration. My recommendation with this title is the same as ‘Ninja Gaiden’; try it on ‘hard’ when you first buy the game or when you finish it on ‘easy’ - that will give you a much faster and deeper challenge. Overall, if you’re a shooter fan, it’s worth giving ‘Gates of Zendocon’ a go. It’s no ‘Zarlor Mercenary’ but it has its own appeal, and is great fun for casual gamers and serious gamers alike. Zap!