It's the battle of the soccer games! Which title will win? Let's look closer at Game Battle No.3!

It's World Cup season! You know the flavour; teams from all over the planet competing to see which soccer team is the best. And just to get the patriotism out of the way early, go Australia!

Anyway, we at Atari Gamer get into the theme of World Cup fever by comparing the two Atari Lynx soccer games that are available on the system. It's the third gaming battle, baby! Get your gloves on (if you're a goalie) because this is going to be a fierce rumble to the finish! 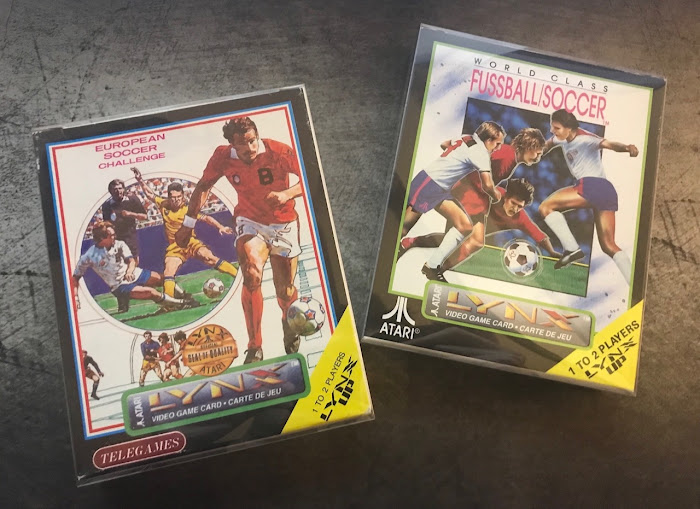 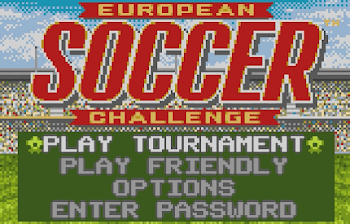 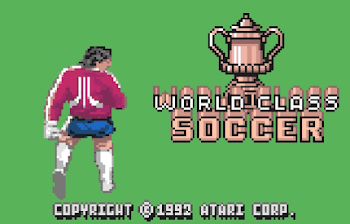 'World Class Fussball' does have one edge over 'European Soccer Challenge' - crowd noises. This is something missing from 'European Soccer Challenge' that would have really enhanced the experience, and helped the games feel more exciting and dynamic. Still, the Euro-based title does have much nicer title music, and the sound effects of kicking the ball are far less obtrusive than in 'World Class Fussball'. Neither game has in-game music, which is a good design choice; but it would have been so good to hear some raucous audience singing in both games! "Oh way ohway ohway ohwayy... oh way...oh way..."

Even though in some ways I preferred the simplicity of the ball-kicking scheme in 'World Class Fussball', the overall experience of gameplay in 'European Soccer Challenge' just puts it ahead in terms of control interface. In 'European Soccer Challeng', the strength of kicks can be controlled, the tackles seem smoother, and the visual quality of the field makes the game much easier to see overall. Need I say, you also have a lot more control over the kind of match you play in this game, with all kinds of options available at your fingertips to organise a casual game, a short match or a difficult challenge.

Sorry 'World Class Fussball', it just isn't your day! 'European Soccer Challenge' has some incredibly exciting features for additional and extended play, such as a terrific password system, adjustable difficulty, match length choice, and so on. It's good to be able to mount a whole world soccer campaign on the portable Lynx console; in fact, this does elevate 'European Soccer Challenge' to the competitive level of such Lynx sporting stalwarts as 'Awesome Golf', 'Jimmy Connor's Tennis' and 'Malibu Bikini Volleyball'. Pretty impressive that Telegames matches the sport gaming finesse of those three Handmade Software games in this regard.

The playability level of these two games can be won by only one game, and this game is 'European Soccer Challenge'. There are just so many options for play that it is truly incredible. I didn't expect the level of involvement that this game could absorb you into. It's a perfect experience for both "one game plays" or for mounting an entire series. Mind you, 'World Class Fussball' is also a thoroughly enjoyable game, which I have had tremendous fun with (and the intro graphics are really special). But 'European Soccer Challenge' wins the day on too many counts in this gaming battle.

Oh, and if you want to confuse people while watching the World Cup, you could always play your Lynx soccer games in front of the big screen and pretend you're controlling the players! Haha... see you next time for the next game battle!