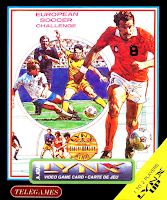 Telegames have created quite a number of Atari Lynx titles, and still remain strong amongst the Atari Lynx community in regards to supplying and releasing games. I must say, there is certainly an argument that ‘European Soccer Challenge’ is among their best games. Whether players feel the same will come down to how much they enjoy sports titles. If you like your soccer games, however, this is the perfect time to play in preparation for the 2018 FIFA World Cup! And yes, if you're wondering, this game certainly has an edge over the other Lynx soccer title, ‘World Class Fussball’.

Customisation: this is one thing that sports games players really enjoy. Well, good news. 'European Soccer Challenge’ allows you to choose how long a match goes, your control scheme, difficulty level, team, opponent, tournament, friendly, etc. This stands in stark contrast to ‘World Class Fussball’, which really doesn't have a lot of options to choose from (as fun as that game is). I was really impressed with what I could select and control: it's a big game strength that hits you early on. Unlike the worldwide team focus of ‘World Class Fussball’, this game lets you to select from purely European sides. And that's a really cool alternative to having another 'whole of earth' team selection focus; definitely keeps things interesting!

One thing that impressed me about 'World Class Fussball' was the graphics and scaling, but amazingly, 'European Soccer Challenge' goes one better. It doesn't have quite as awesome title graphics, but it DOES have lusher grass, clearer sprites, better animation and a truly impressive soccer oval. The boundary lines actually adjust perspective as you run past them, which is incredible to watch. The ball, goal and other features are fantastically represented, and the various cutscenes (eg. red cards) never feel obtrusive. There's no difference in the look of players (like 'World Class Fussball') but it's hard to remember this as a problem after watching the action!

Musically, the game decides NOT to pump tracks into the in-game action; which was a 'World Class Fussball' decision as well. It's a good call; you need all the concentration you can get. The sound effects in this game, notably, are much less grating than 'World Class Fussball'. Kicks, bumps and whistles are crystal clear, and the title tune for this game is really nice and memorable. I don't know, sometimes I think sporting titles on the Lynx got a selection of the best audio tracks of all; and I have no idea why that is. I must say, I did miss the 'World Class Fussball' crowd noises! That addition would have been both appropriate and welcome in this game, and it wouldn't have been hard to add (maybe after each goal).

The controls do take a little getting used to. It's not quite as straightforward as 'World Class Fussball', where you simply hammer the button to get a good kick going. In 'European Soccer Challenge', you must hold down the button and then release it to give the kick more power or less. That's a bold control choice, and I did find it to be less intuitive and more prone to "mis-kicks" than 'World Class Fussball'. But at the same time, it does feel more strategic, and the ball itself travels with more realism in this game. As with 'World Class Fussball', the Lynx player will be given the selection of a player as the ball moves close to them, whether in opposition or in possession of the ball. That is, the game selects who YOU are for you, depending on where the ball is. But even given that, you do have a lot of choice over what you do. You can lob the ball over the opponent's head, do corner kicks and slide tackle with the best of them. It's hard not to be blown away with all the "real game factors" they packed into this game. My favourite thing was kicking a goal penalty kick. Score!

The longevity of this game is surprisingly strong. There are a number of reasons why this is the case. Firstly, there's a steep difficulty curve, so no match is a pushover. Even though you can select your difficulty level, the 'easy' setting is actually pretty tough! Admittedly, it can feel too tough, if there is a downside; you'll need to practice for a while with a friendly (or two) before you face the European soccer kingpins. Secondly, there is a password system to save your progress! That is a seriously cool addition, and shows the game designers really cared about game session continuity. ‘Jimmy Connor’s Tennis’ also has that tournament functionality to benefit from, incidentally. Lastly, the amount of options you can select (as mentioned earlier) really sets this game apart. Only got 25 minutes on your hands today? Play a 4 minute quarter friendly! Got a whole afternoon to spare? A tournament with longer quarters is within your grasp - go berserk!

Overall, 'European Soccer Challenge' is a class game. I get the feeling Telegames spent a bit of time thinking about what was missing from 'World Class Fussball' and made sure they added it. As I've said earlier, I like 'World Class Fussball', even though it is simplistic in some ways. But 'European Soccer Challenge' just feels more nuanced, more polished, more optioned. It's like the game designers really made certain they catered to players who appreciated customisations, which puts the player in firm control over the proceedings. The game misses being in the "9" rating zone for being just a bit too hard and sometimes tricky to control. But it deserves a solid "8" overall, as it really feels like a portable powerhouse made to compete with both PC and console titles. No knocking that; 'European Soccer Challenge' scores goals on multiple fronts. If you're a soccer fan, grab it!