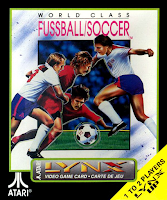 The Atari Lynx has two soccer games on it: I say “soccer” because I’m Australian... we don’t call it "football" in the land down under! "Football" is the name we give AFL Football, which is a very different game where tackling is in fact encouraged! But anyway, the name of this game is not even soccer or football... it is ‘World Class Fussball’ (“Fussball” = "football” in German). Well... we've explored the different language descriptions, so let's now focus on what's really important here: what is 'World Class Fussball', how do you play it, and is it any good?

'World Class Fussball' is a straightforward, no-frills soccer game. The minute you switch on the game you are faced with a very nice beginning animation of a large soccer player booting a ball some distance. I love these nicely done intro graphics on the Lynx (looking at you 'Rampart') and 'World Class Fussball' is up there with the best of them. Before you hit the pitch, you can go into the options section, or just select your team (and the opposing team) for a match. Then it's onto a field... a field that features some pretty impressive scaling!

The way 'World Class Fussball' represents the action is by zooming in or zooming out on the ball and the players... which is actually cool when you think about the era of the Lynx and what it's capable of. The player sprites are nice to look at, but they are a bit choppy in how they're animated. The running doesn't quite look natural, and the players all look exactly the same as each other. The ball moves well enough though, if a little "heavy" and liable to stop too soon; but you do get used to that. All up, it’s not a perfect visual that you're looking at, but it's certainly passable and it's much easier to follow the action here than some other Lynx sports titles, like 'NFL Football'.

Soundwise, there’s not much really to report in this game. It’s no red card, but music and sound is minimal. The intro music in this game is welcome, as there's no music in the game itself. Like a lot of soccer games (on any console) I didn't really expect to hear anything other than the kick of the ball and the occasional whistle blow, and what you get in 'World Class Fussball' is exactly that. Still, there are some synthetic sounding crowd noises, which does produce a nice, tense kind of atmosphere with the sound it provides. Crowd noises come in and out of the action at unexpected times, which really keeps you on your toes. Obviously, more sound effects would have brightened up this game a lot. On the negative side, the constant "KLUNG" sound of players kicking the ball can get grating at times, as it's not very subtle. But it's not too noticeable once you have played the game a few times.

Controls are... a little hard to rate, actually! They work fairly well in what they try to achieve. Each time the ball lands near a player from your team, that's the player you will begin to control. In that sense, it’s much like ‘European Soccer Challenge’ on the Lynx. What you find is that the player you control will switch whether you possess the ball or not, though you never get the feeling the game is feeding you a dud player. And what you will begin to find is that it's a real "tug of war" in terms of which team gets the ball at any particular time! The opponent can steal the ball off you with alarming frequency, but thankfully, you can tackle them and do just the same. In this way, 'World Class Fussball' is very realistic when it comes to the back-and-forth nature of soccer itself, something ‘European Soccer Challenge’ also nailed. It's pretty easy to pick up the controls overall, so I was pleasantly surprised in some ways. You can move your selected player in any direction, and there's nothing like getting ready to kick a big goal!

The gameplay of 'World Class Fussball' is, overall, satisfactory. It's not hair-raisingly brilliant, nor incredibly poor. It's a decent, fun little soccer game that neither throws up many surprises nor feels inconsistent. I enjoyed kicking the ball around and passing amongst my players, trying to score that elusive goal to damage my opponent's chances. Admittedly, goal kicking can feel a little weird; you often have to get right in the goalie's face to whack the ball in the net. But other than that, everything plays just like a soccer game should. It's nice to have the options that the game presents you (especially the country choice selection) but it would have been nice to have more in-depth game and player options. ‘European Soccer Challenge’ wins hands down when it comes to options and customisation. In the end, ‘World Class Fussball’ is a stock-standard soccer game that delivers what it promises; no more, no less.

What can I say in conclusion about 'World Class Fussball'? I found myself enjoying this title, but not as much as I would have liked. Still, I liked it FAR more than those who hate the game. I don’t think it’s as bad as some reviewers say it is, actually. This is a soccer game that plays sufficiently enough, is enjoyable, and is a nice way to spend an afternoon playing jaunt. Sure, there aren’t a huge number of options, and things are kept pretty straightforward. And I totally understand why some players find the game less than inspiring. But I also think it's worth Lynx soccer fans giving this game a go and seeing what they think. ‘European Soccer Challenge’ certainly delivers a more nuanced game overall, but when it comes right down to it, this game is at least worth a decent passing grade. I had some good fun with it, and I still do!

Try a kick-off in this 'World Class Fussball' and see if I'm accurate!