A battle between two games that both have ‘battle’ in their titles. This sounds like an uber-battle!

Today, two arena-based “vehicle battling” games are ready to face off. Who will win? It’s time to dust off the boxing gloves, get in the battle vehicle, take OFF the boxing gloves (can’t drive with those on) and get prepared for the vehicular explosion ahead!

Start your engines... this battle is ready to go! 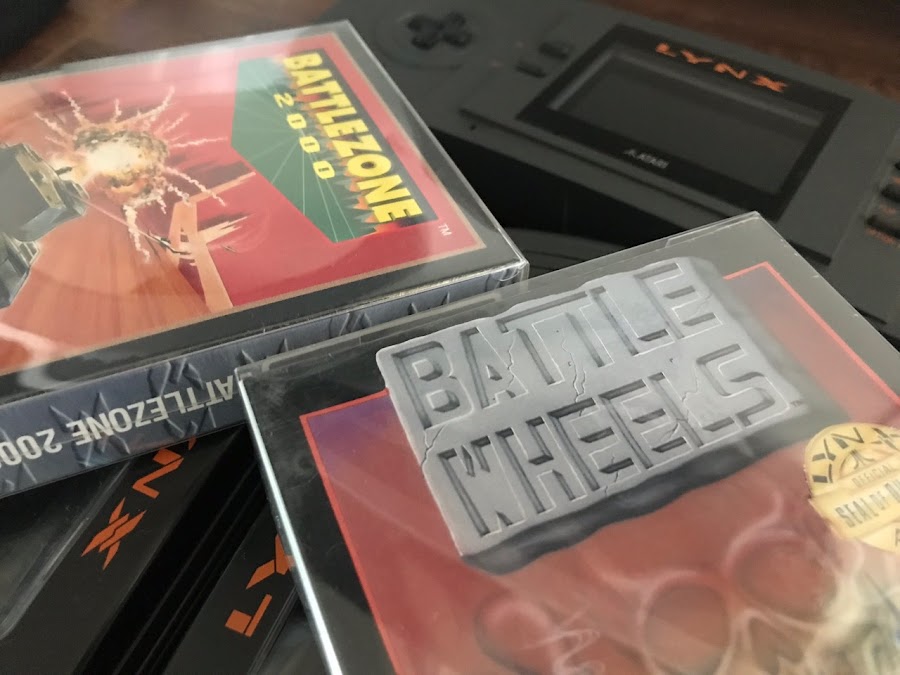 The wire-frame look of ‘Battlezone 2000’ looks incredible. It’s purposely simplistic, but the animation is smooth and effective. The title screens and selection screens, also, are high quality. In fact, everything that is presented to you in-game here is very well placed and planned.

But there’s no disputing the detailing and effects of ‘Battlewheels’ on the Lynx. It’s one of the best looking Lynx games in history, with great sprites, animation and special effects galore. Watch the effect of running over a broken, rusty car hulk with your vehicle... crunch! There’s a lot to enjoy, and makes the possibility of more fully fledged FPS games for Lynx seem not too out of the question. Of course, the sole FPS shooter ‘Cybervirus’ (aftermarket title) fills that gap nicely! 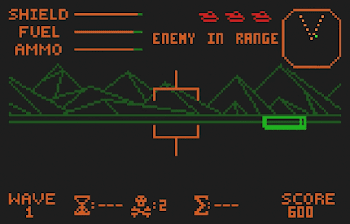 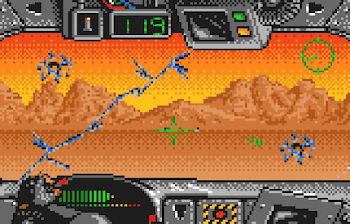 ‘Battlewheels’ has some nice sounds, but the quality of the effects in ‘Battlezone 2000’ make it a clear winner in this category.

Just like the graphics, the ‘Battlezone 2000’ sounds are aimed at the retro audiences, and sound like authentic Atari 2600/7800 effects. This is actually incredibly cool, and only enhances the hearkening back to the past that the game represents.

It's worth mentioning here that the main music theme is no slouch either, as well as the various digital power-up effects. There’s really no competition in this category, in my view. Chalk one up for 'Battlezone 2000'!

‘Battlezone 2000’ has the edge over ‘Battlewheels’ for one reason... it’s just so simple to control.

Where action is intense, you don’t want too much to think about when you are trying to win the battle. ‘Battlezone 2000’ gives you the simple d-pad options and button presses to carry out exactly the responses you would like. It’s highly responsive, and it’s very hard to blame the controls when you finally get shot down in the heat of battle. It’s very well done.

That cannon doesn't fire too fast though, does it? Well, that's the way the game tests your skills out! Fire away!

‘Battlezone 2000’ gives the player a mighty challenge, but ‘Battlewheels’ is even more of a chaotic vehicular combat test than that. It just feels way harder to keep your vehicle from damage, and you can expect to be attacked with even more ferocity than in ‘Battlezone 2000’. Plus, trying to maintain your place on the winners' table is a difficult job, but one well worth trying for.

That means there is only one category left (after these game play videos)...

The final category goes to ‘Battlewheels’ - by the tiniest smidgeon. This one was really close.

Both games have some terrific options and features, and so even with the superiority of ‘Battlewheels’ in this area, it’s hard not to recommend both games as excellent Lynx titles that are well worth the purchase.

This has been one of the closest battles so far, from two “battle” games that are easily among the best titles on the Lynx. Both are in my top 25 Lynx games, and they may even be in yours!

‘Battlewheels’ gets the checkered flag and the trophy today, in a down to the wire showdown! Who will enter the Lynx battle arena next? Tune in once again when you hear the bell ring - that means the battle is about to start!