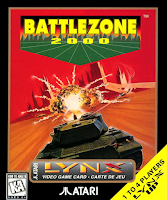 I have to say, it seems to me that some of the final official games released for the Lynx were among the most exciting. 'Lemmings', 'Battlewheels', 'Dracula: The Undead' (amongst many others) and then this particular title: 'Battlezone 2000'. With thrilling 3D wireframe graphics, this game looks pretty much unlike anything the Lynx had in its library before it. And it's a pretty cool title just because of that!

In terms of a storyline, 'Battlezone 2000' takes place in 2005 (!) where the futuristic Supertanks have gone haywire with a computer virus. With humanity under threat, you're sent in to destroy the problem before it fully takes over. Sorry, you can't get out of it, they picked YOU. But you don't have to solve this issue on foot: you get to man a tank yourself! Your job is simply to survive the various "waves" (levels) and meet the objectives in order to progress, which usually means knocking down several of the opposing robotic vehicles and surviving with enough fuel, ammo and shield power to save the day.

It's hard to understate just how awesome 'Battlezone 2000' looks. Playing this game for the first time, I had the same look on my face as Michael Jordan watching five foot seven Spud Webb win the NBA slam-dunk contest; I was like "How? What? Woa!" I mean, take a look at this thing! This is the kind of game that would work as an indie title today for any Mac or PC. 'Battlezone 2000' looks brilliant. The tanks you need to destroy move around the scenery in style, like they own it, and it's seriously cool to chase them, fire weapons at them, and look around to see what supplies you can pick up. Everything is in black and green, and it all flows phenomenally well. The famed Lynx scaling is truly on display. Even the rotating vehicles on the tank selection screen look completely sick. If there's any criticism, it's just that there is a visual sameness in the level appearances (we'll come back to that) but the action itself is slick, fast, and not unlike 'Battlewheels'; need I say, that's a very good thing.

There's no music in 'Battlezone 2000' except for the title and customisation screens, but those tracks are very nice; extremely atmospheric and future-themed. The action in-game is all sound-based rather than musical. And the good news here is that this is retro sound effects at their finest. I felt like I was playing an Atari 7800 game or something: explosions had that lovely early-80's vibe. But other audio effects are refreshingly futuristic, like the sound of picking up a new item. I was not disappointed with anything I heard, and loved the crackling noise of my vehicle hitting the scenery or the boundary. That meant I had to watch my step!

Another good bit of news is that the controls are also really strong. There's a lot going on when you are watching the action, but you never feel as though the view is cluttered. You only really need to know about the main buttons when it comes to weaponry. Other than that, the d-pad steers everything nicely. The game sets you inside many different arenas, and there is huge freedom in being able to move around 360 degrees. You can turn whichever way you want, reverse, go forward, and chase down tanks (or be chased!). Funnily enough, the most hilarious (and yet scary) thing is driving along and just KNOWING you are being followed by a tank. Soon enough you'll need to turn around and face your foe. Some are tougher to beat than others and they're not stupid either; they don't make things easy for you; they're strafing around your cannon and turning wide circles when they have to.

So how does it play? The answer is "very well". Playing 'Battlezone 2000' is like settling in to a series of PC 'Doom' deathmatch battles. 'Battlewheels' obviously did this kind of genre extremely proudly on the Lynx, and it's nice to say that 'Battlezone 2000' also effectively represents the genre in a very respectful way. You can choose / customise your vehicle, watch the in-game map, and the difficulty level is set just right (you have a series of lives). As stated earlier, the only drawback of this game... and there really aren't many... is that there's not a lot of level variety. The arenas look the same and the objectives are fairly similar across each wave. Which is a shame, because with more variety, this game would easily be amongst the best on the system. That said, you know what? I absolutely love FPS style deathmatch games, and 'Battlezone 2000' is one of the most fun games I've played within this realm. It's just relentlessly enjoyable to get into a title that shows off the Lynx capabilities to this degree and which plays as well as it does.

And get this... there is a hidden "other" 'Battlezone 2000' game inside this title. I kid you not. Yes, the game designers decided to hide a more futuristic version of this game within the cartridge itself, accessible with some clever button presses at one of the starting screens. It's well worth checking out what the designers originally came up with and to see the totality of their vision. Instead of wireframe opponents, prepare to see some very interesting scenery and sprites, as well as some amazingly game mechanics. When you find this incredible Easter Egg, it's not unlike the feeling of locating the Mandelbrot generator in 'Chip's Challenge' or the zit popping game in 'Slime World'; but then you remind yourself, those were mini-games and this appears to be a fully fledged production! It's mind-boggling stuff and well worth the time investigating. And yes, the game looks just as spectacular as the regular game.

Overall, 'Battlezone 2000' is a superior Lynx game for the system, and which is only let down by a lack of variety in level stages. But I'm going to say "Don't let that stop you from checking this game out!" Just like 'Joust' on the Lynx, this is a "how far can you get" classic, and it's just beautifully done on the Atari Lynx. There's nothing like that feeling of full freedom in a game, where you can just go anywhere you want and make the in-game choices you desire to make your way through. I find myself coming back to this game all the time, and I expect to keep doing that until I've reached advancement in the game to a degree which satisfies my playing curiosity. But I don't see that threshold being reached anytime soon. This is a game that really reminds you why you fell in love with the Lynx in the first place. So, get in your tanks! 'Battlezone 2000' beckons!