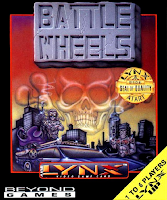 Post apocalyptic scenery and smashed up, weaponised cars. Sound familiar? From “Mad Max” to the ‘Borderlands’ PC/console series, gamers just can’t get enough of mechanised cars within games based in the decaying future wastelands... populated by the remainder of human society, of course. 'Battlewheels' was a late inclusion to the Atari Lynx library, and boy, it sure pushed the Atari Lynx engine to its limits! It also showed the actual possibility of FPS-based gaming on a Lynx before any other official title, which was a remarkable thing. Let’s explore this unique Lynx gaming experience in a detailed gaming review.

‘Battlewheels’ is about getting in your car (or trekking on foot) and blasting other cars. In an arena. Until you win the prize. That’s it. But the way you do that is totally up to you. Battlewheels’ lets you do things your way. Do you want to start out with a huge amount of money, or a little? Did you want to modify the gaming mode, the number of frags needed to win, and whether or not to have a radar? Got a desire for a single player campaign or do you want to have a chaotic, action-packed multiplayer experience? ‘Battlewheels’ lets you play in your own style, and the game is all the better for these customisation options.

Let’s talk graphics. Wow. Okay, this could be one of the most visually impressive Lynx games of them all. Ask anyone who has the game and they’ll tell you how good they are! It’s not even just the sprites or the backgrounds that are brilliant, as nice as those are. The animation and scrolling are just off the charts. These cars truly go 360 degrees around the arena. They’ll pursue you, crash into you, fire weapons at you; the AI is astonishing. Smooth scaling accompanies your drive through the arenas, and obstacles like buildings can block your path. Sunsets sizzle in the distance, flames pour out of engines, and spraypaint guns splash all over your windscreen. This is a game that could not have worked on a Game Boy or a Game Gear, and if this was a Lynx launch title, it would have turned mad heads on release. Oh, and wait until you see someone clamber out of their vehicle and pursue you on foot. It’s like playing ‘Doom’ on PC but with a vehicle! Of course, you could always step out of the vehicle with your sidearm or trusty rocket launcher and fight them human v human. And yes, you can do that if you like!

Sound wise, there’s minimal music except for the introductory scenes and setting screens. In-game, there’s just the explosions and blasts of the battles. There is nothing wrong with these sound effects, and they provide the perfect accompaniment to the warring machines in front of you. The hum of the engine is actually well done, reminding you of ‘Checkered Flag’ in some ways. Really, to be honest, the graphics and intensity are so engrossing that the sound actually doesn’t come into your thinking a whole lot as you play. You’re really just trying your hardest to stay alive and not be fragged by the cyberpunk types who drive the other vehicles. If you’ve played ‘Doom’ or ‘Unreal Tournament’ on deathmatch mode, you know that you aren’t thinking much about the audio in the heat of a battle! You’re just planning to stay alive!

Control-wise, there’s a lot of stuff you can do in this game, but it always feels within your control. Weapons are easy to use, and you can even look at your back mirror and see what is going on behind you. And this is something you’ll really need to do sometimes! As in, that sound of crunching metal that you hear, with no sight of anything before you, means usually that there’s a dude ramming your car behind you! The fact that you can even get out of your car and walk on foot is unbelievably cool, though you are a big target doing this; your car is the safest place to be (if you call the arena safe that is). There’s plenty of cool weaponry and it seems a shame for me to spoil what you’ll find in this game; it’s all very well done and keeps the action interesting.

The question is, how does the game play overall and how long does it last? There’s no doubt that the overwhelming consensus is that ‘Battlewheels’ is best played in multi-player. But even considering that, there’s enough variation here to run a solo campaign too. As said earlier, the settings are what you make them, so you can make the game as hard or as easy as you like. And here’s the crazy thing about this title; it is so unique, so revolutionary, so unlike anything that the Lynx has ever seen, that you’ll find you get just as much fun watching the action on-screen as you will playing it for long stretches. I mean, I can’t stop staring at the thing, crazy as it sounds. I don’t mind it as a ‘pick up and play’ title on its own, really; though that’s not necessarily what the game is purposed for ultimately. It’s great to show friends, to experiment with different weapons, and to see the hilarity on the podium once you win (I won’t spoil what happens). Some more variety in the arena surroundings would have been nice, and maybe a few different goals (eg. Capture the Flag!). But when the action is this amazing, it’s hard to really complain.

In closing, ‘Battlewheels’ is one of those Lynx titles that you cannot compare with any of the other official releases. It stands alone, and that’s a great thing! It’s destructive, skill-based, strategic, graphically incredible and has rightfully gained the attention of many non-Lynx players on the web, who are amazed at the fact that a Lynx could even run this game. It’s got ‘tude, plenty of options, and is one of those showcase titles that stands alongside other quality stalwarts like ‘Blue Lightning’, ‘Stun Runner’, ‘Dracula - The Undead’ and ‘Klax’. If you want real originality with some ferocious action, well you’ve come to the right place. Bring it on!