The BennVenn LCD mod for Lynx Model 2 has been available for purchase for quite some time now but the Lynx Model 1 kit hasn't yet shipped. That's about to change and we here at Atari Gamer were able to test drive a preview version of the kit on one of our Lynx MK Is so you can get a taste of what's to come.

The kit that BennVenn sent to Atari Gamer to check out was a preview version. The final production version will have tweaks and fixes based on our feedback.

So lets get right into it. Compared to the Lynx Model 2, the Model 1 is much more difficult to work with. The LCD mod kit itself is identical (apart from the firmware) to the model 2 kit, but the Lynx-side installation is quite fiddly and cannot be easily reversed (if for some reason you want to put the original screen back into your Lynx, you might be out of luck - depending how destructive the install was). Opening up the Lynx you will see that its original screen is firmly secured, the back light and the LCD itself sandwich the Lynx motherboard. There is a 67 contact ribbon cable for the screen which is glued into place and can be tricky to remove intact. 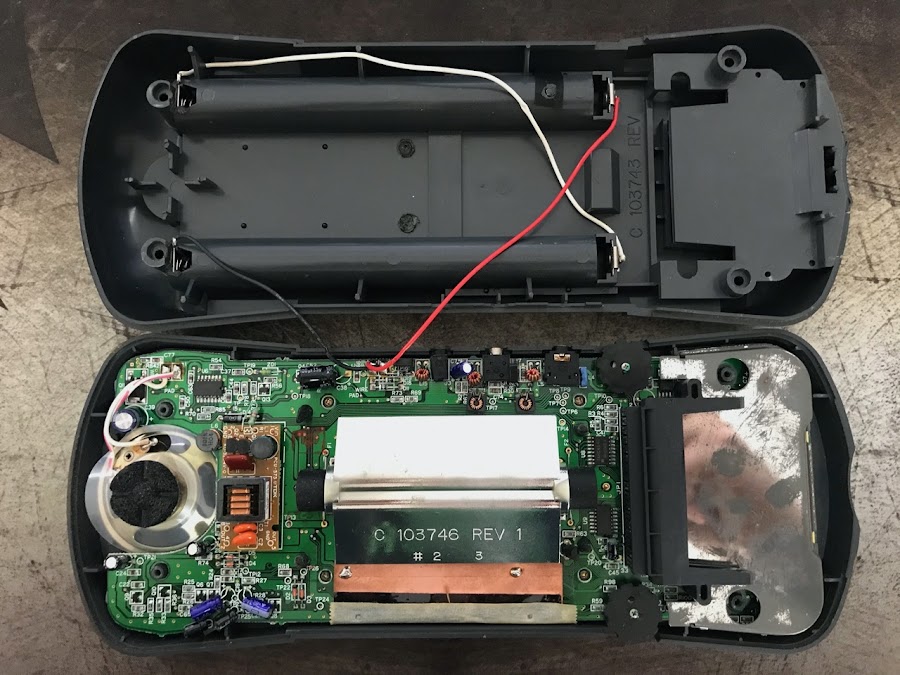 Without going into details (this is a preview after all, not an install guide)...the two modifications to the Lynx 1 motherboard that must be done are the removal of the original LCD screen (a bit tricky) and the removal of the power module (trivial). With the screen - we cut the ribbon cable, it was just too difficult to do otherwise. With the power module - we removed the entire daughter board but if you want to keep it, you only need to cut the Vin pin. 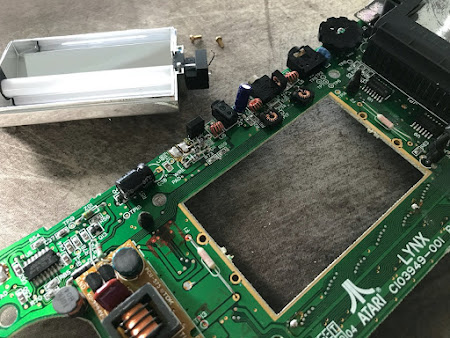 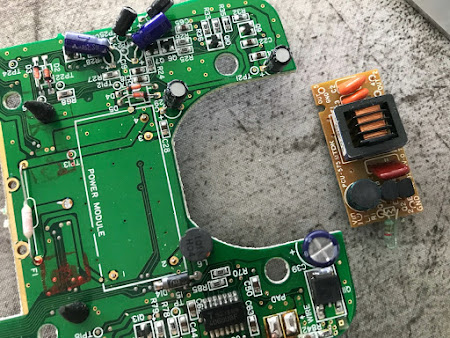 The kit was connected to the Lynx 1 motherboard with mod wire, but unlike on the Lynx 2, the Lynx-side of the wires have to be soldered onto the tiny ribbon cable pads where the original screen was. This can be easy to mess up due to the size of these contacts and will put your fine soldering skills to the test. There was a handful of wires that were connected to other parts of the motherboard too, these were for the power, backlight and the RES signal. 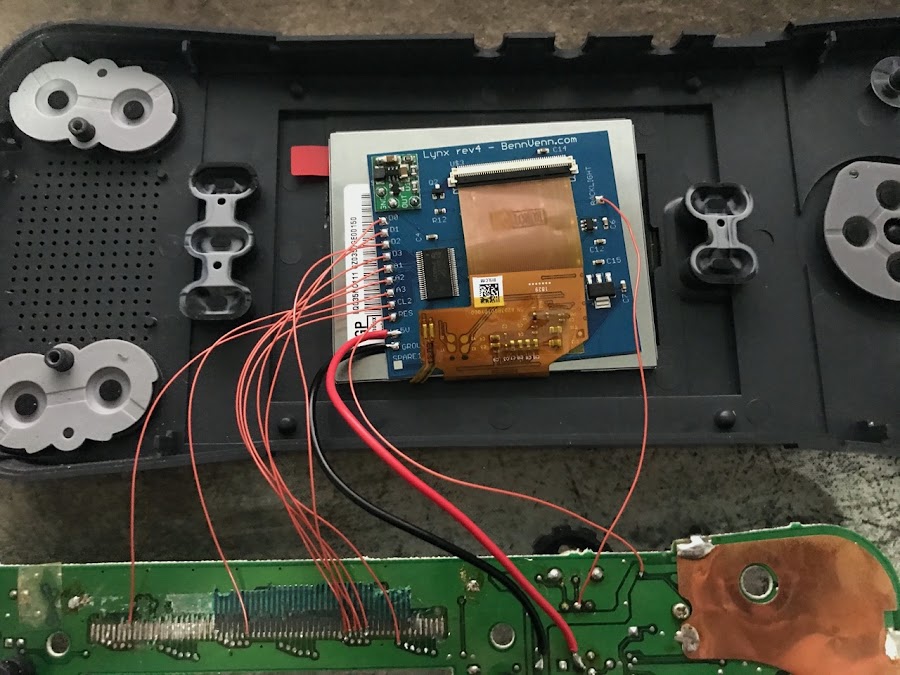 BennVenn provided a bracket for this screen that was self-centering and it worked OK to get the screen into the Lynx, but will need a few tweaks before it's ready for distribution. The orange colour was just for testing, with the final bracket likely to come in clear. Just like the model 2 bracket, this one fit over the screen but there were no screws this time, the bracket was held by pressure from the motherboard. 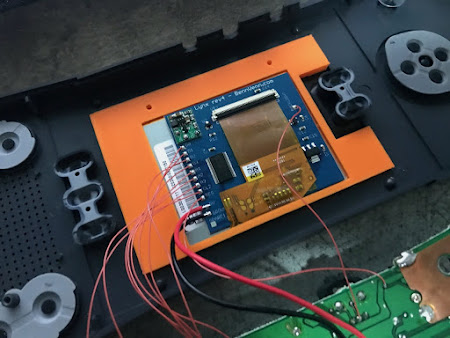 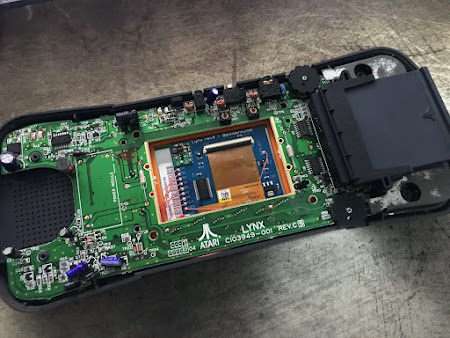 Here's what the screen looked like powered on. Ignore the D stamped on the right, that was just part of the protective plastic that wasn't yet removed (as this was not the final fitting). 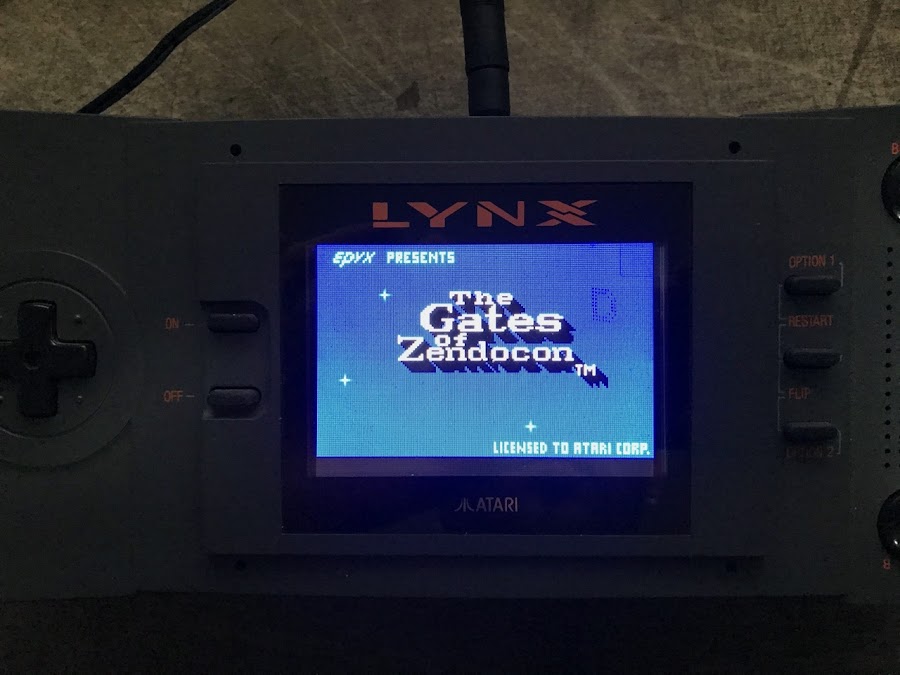 The very first thing you will notice is the large band of blank screen at the bottom of the display area. This isn't a cut off picture, it's simply padding, but the top of the screen has maybe one or two rows of pixels that are either covered or difficult to see when looking at the Lynx straight on. This will be fixed before the final version is released, either with a modified bracket or by changing the mod kit itself (which may need some additional soldering). The slightly off-centre horizontal positioning will also be fixed, that will hide the strip of metal that is visible on the right side of the screen.

Since the kit hardware was the same as the model 2 version, the picture looked the same as that version. However, since the Lynx 1 doesn't have a backlight button, there is a small difference in how brightness and scan lines are adjusted. The Lynx 1 brightness wheel can be used to simulate a button press by rapidly rolling it to its halfway mark. Rapidly rolling it to half way then back makes the LCD change brightness by one level, rolling the wheel and holding at half way a little longer will trigger scan lines on/off. This is a little more fiddly than pressing a button but at least it allows you to make use of all of the the LCD kit features.

Overall this mod kit is great, if a little more challenging to install than the Lynx 2 counterpart. It's definitely worth having and will make your Lynx look and feel like new (actually better!) again. The final version will cost the same as the Lynx 2 kit, at around $55USD (or $65), depending on whether you order the Chinese or Japanese made LCD panel.

-AG
Tags: BennVenn, Hardware Mods, Review
♥ Did we get something wrong or you have something to contribute? Please tell us about it!
You can find Atari Gamer on...
Be sure to follow for the latest Atari Lynx news, updates, stories and photos!
[ Don't show again ][ Dismiss ]
Loading...
10
Close