Even the best designed and tested products need a little bit of troubleshooting at times. This is a troubleshooting guide for the BennVenn ElCheapoSD cartridge for Atari Lynx that we sell in our store. If you experience an issue that is not covered here, please feel free to contact us and we will do our best to resolve it for you.

If you haven't already, please refer to the ElCheapoSD for Atari Lynx - Getting Started Guide.

Lynx not Powering Up🕸

Some users reported that after the ElCheapoSD is inserted in their Lynx, the Lynx will not power up. The INSERT GAME screen is not shown, none of the buttons (including the On button) respond. To resolve, check your cartridge to see if there is an excess of plastic on the sides. If there is, use a scalpel or similar blade (or sandpaper) to get the side flat. See photos below showing the extra plastic on the side (left) and with it removed (right). 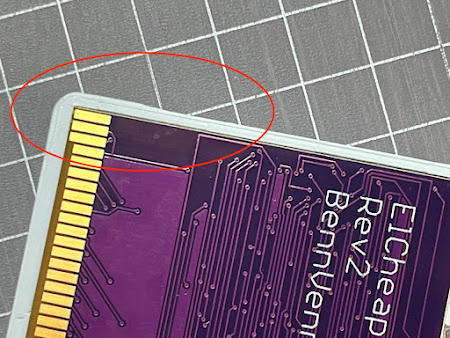 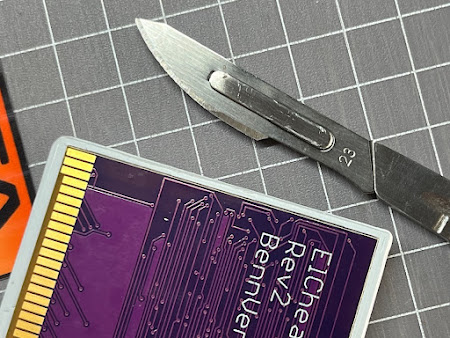 The ElCheapoSD supports LNX ROMs only. These typically have the file extension .LNX, but not all .LNX files are actually LNX ROMs. The other ROM format, LYX is often named incorrectly as a LNX ROM. If you find a ROM is not working, open it in a text editor and if it doesn't have the text "LYNX" as the first four letters, it is not a compatible ROM.

It's been reported that sometimes ROMs fail to load when they have long names or some special characters in the file name. If you have a ROM that's failing to load, try to rename it to have a short name (8 characters or less) and see if that resolves the loading problem.

ROMs not Appearing in Menu🕸

Officially the menu loader for the ElCheapoSD supports up to 256 files. This includes both valid ROMs, as well as other files, including any hidden files. If your ROM is not appearing in the menu, check the SD card to make sure there aren't any hidden files on it, and remove any files that do not have the .LNX extension.

When the Lynx is powered up with the ElCheapoSD in it, with a SD card inserted, the INSERT GAME screen is shown. This could be caused by bad/dirty contacts with the Lynx cartridge slot. To fix, use at least 75% IPA, dip a cotton bud/wool into it and wipe the contacts clean on the ElCheapoSD. Insert/remove the cart from your Lynx and try again (you might want to do this several times).

If the issue persists, the problem could be with the SD card. Try a different (newer) SD card, and make sure it is formatted as FAT32.

If the issue still persists, you may need to clean out the SD card slot. This is best done with compressed air (you can get spray cans of these). Make sure the SD card is removed from the ElCheapoSD before attempting to clean the slot.

When the Lynx is powered up with the ElCheapoSD in it, with a SD card inserted, the SD ERROR screen is shown. This can be caused by an incompatible SD card. Replace the SD card with a different (newer) SD card, and make sure it is formatted as FAT32. Also make sure that BOOT.BIN is on the SD card, according to the getting started guide.

The ElCheapoSD doesn't have a sticker and just has an exposed PCB on the contacts side. The sticker is sold separately in our shop.

Tags: BennVenn, ElCheapoSD, Troubleshooting
♥ Did we get something wrong or you have something to contribute? Please tell us about it!
You can find Atari Gamer on...
Be sure to follow for the latest Atari Lynx news, updates, stories and photos!
[ Don't show again ][ Dismiss ]
Loading...
10
Close