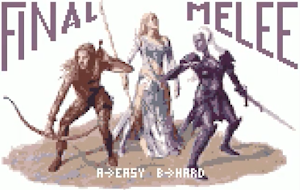 The story behind the game is about a war of all the races of a classical fantasy world against an evil wizard (yes I read all theTolkien books in my youth), but when all the armies of the world are going to destroy the wizard left without magick powers after a long fight, it uses a dark power to drain all the vital energy and magic powers from it's enemies. Only the three stronger kings of the world can resist to the attack, but they remain weak like young apprentices: a weak mage, an archer without his weapons, and a strong but slow warrior with only a sword. Could they suvive without their magic weapons and all the experience gained in years of adventures?

The wizard will use the drained energy to summon creatures and attack the three survivors, but he needs time to control the new power so it can use it just a little at the beginning, but his ability will increase with time. On the other hand killing the attacking creatures will make return some of the energy to the three fighters.

The combat style is inspired to the FF battle mode, killing an enemy makes gain experience and sometime a new weapon, or an items like potions or scrolls (in hard mode the characters can't recognize their kind at beginning and have to try them to learn again their use - this is not implemented yet). When the experience bar is full the character gains one point of HP, or the max amount of MANA or SPEED (selected at random). There is a rare scroll that can increase the speed of a character and a healing potions. Other Scrolls and potions (black ones) are for attacking. Using magic will consume MANA that can be recovered passing the turn without an action (MANA can be recovered to the max value reached by a character). There are four magic spells, each one requiring a different amount of MANA, but only FIRE attack and CURE are implemented so far. CURE makes recover a character all the HP, reviving it if dead.

This title is marked as IN DEVELOPMENT, stay tuned for more information.
⤵️ ROM Download not available - Why? 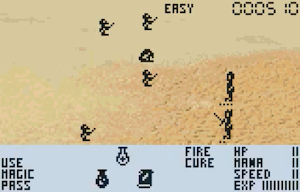 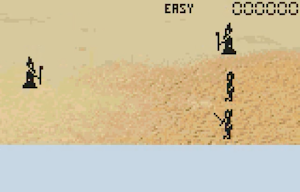 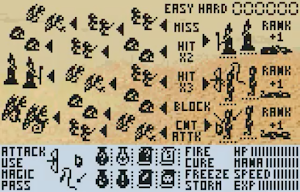