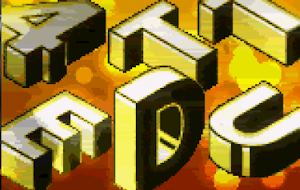 3D Tic-Tac-Toe is similar in concept to traditional tic-tac-toe but is played in a cubical array of cells, usually 4x4x4. Players take turns placing their markers in blank cells in the array. The first player to achieve four of their own markers in a row wins. The winning row can be horizontal, vertical, or diagonal on a single board as in regular tic-tac-toe, or vertically in a column, or a diagonal line through four boards.

When it's your turn move on the board with the directional pad and place your move with the A key, then wait for the apponent move.

Making 4 in a row isn't simple, because there are only 72 possible winning lines, and if two players place at least one mark on one of this position, it can't be used anymore to win the game. In fact the first defence strategy to learn in this game is to block your opponent in making a row.

To master the game you'll have to learn develop a board situation where placing a mark on the board you create several (two or more) opportunities to make 4 in a row at the next move, so that the opponent can block only one.

This situation has a name in japanese board games: ATARI.

4TTude can be played agaist the Lynx CPU or versus another player, playing on the same Lynx alternating the moves or with two Lynx connected with a comlynx cable.

GAME CONTROLS
DIRECTIONS KEYS: Navigate menus or move on the game board
A KEY: select an option on the menus or place you move during the game
B KEY: access training tools during an unranked game vs the CPU
PAUSE: pause / unpause the game
OPT1: rotate board visualization options (only during a game)
OPT2: rotate musics (during game) and mute unmute it
PAUSE OPT1: Back to game menu
PAUSE OPT2: Rotate the screen
OPT1 OPT2: clears the internal EEPROM (only when the game is paused) 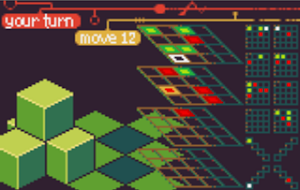