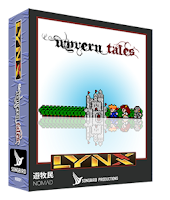 The first and only JRPG for the Atari Lynx - Wyvern Tales - has been in development for the past six years by Jasper van Turnhout (Nomad Studio). Now that a signed copy has landed on my doorstep and I've spent a good few weeks playing and finishing it I can finally write my review. My experience has been quite a rollercoaster - exhilarating at times, frustrating at others, but fun all throughout. So lets see what Wyvern Tales is all about!

If you're a fan of Final Fantasy, you will love Wyvern Tales. It has a very similar feeling and interface for that matter. The game is set on The Island of Trials where our three Heroes - Arth, Deri and Mori who have come together by fate have to face the Trial of Gods. This trial has brought many to their deaths but if our heroes succeed, they become the next Guardians and rule in the name of The Goddess of Nature. It's a simple story, but does well to set the theme of the game. The story unfolds to keep you interested but never goes into too much depth, which is most likely due to space and memory limitations on the Lynx, which is something Jasper commented on as being quite constraining.

Naturally the trials are made up of exploring dungeons and killing monsters followed by a boss fight, then more monster killing unless you teleport out. In order to be successful you have to level up and buy better gear so you can then kill more monsters and face stronger bosses. This is the usual grind-boss battle-repeat cycle that many JRPGs have at their core and it feels great! ...well maybe the encounter rate could have been lower, but I'm not complaining. The monsters you fight are very typical of the JRPG genre - insects, goo blobs, spirits, some human type enemies and of course - Wyverns. I liked the selection of enemies and their usual variations as the game progressed e.g. spiders, gold spiders, grey/blue spiders, boss-type variants appearing in new areas after a boss fight, etc. Unlike the name of the game suggests and how the initial story unfolds not all bosses are Wyverns and not all Wyverns are bosses, this was a nice touch and added to the anticipation and excitement of a new boss fight. What would I be fighting next?!

The grinding was the frustrating part I referred to earlier, especially at the beginning of the game. I found that in order to get any kind of decent equipment I had to stick near a village and kill as many monsters before my HP and MP ran out. Back at the village I could be healed for free (HP and MP) at a statue of the Goddess. This worked really well and it was the same approach I used for the first couple of villages...until the poisonous monsters were encountered. Free healing didn't include status ailments! This meant I had to grind more to buy antidotes in order to be able to do more grinding. You can see how that got a little frustrating.

The battle system in Wyvern Tales is turn based. Unless it's a surprise attack, you get to go first, otherwise the computer starts the battle. There is no count down timer. The battle is as simple as it gets, for each character select an action and the target of that action i.e. attack monster or use healing potion on Deri. This continues until all of the monsters are defeated or if you're unlucky (or not skilled) and all your Heroes have died. It is also possible to flee a battle, unless it's a boss battle, which causes each of the monsters to have a turn before you run away. Fleeing is always 100% successful unlike in some JRPGs. During battles, I found that attacks/magic and defence were a little off at times - I'd hit for very few to zero HP, then all of a sudden I'd be causing huge amounts of damage for my level. A similar pattern appears for monsters too, they can one-shot half your HP or miss completely i.e. there isn't consistency to damage dealt/received.

Apart from the main storyline there is a sort of a side quest to the game. Monster Hunts. These are non-random monster encounters with additional monetary rewards. Each one gets stronger and more difficult to defeat and must be tracked down first. It's a nice addition/distraction, though I found that I only got through a few of these before getting bored with them.

Lets talk graphics. The Lynx is only capable of showing 16 colours on screen at a time, but despite this limitation, Wyvern Tales does a great job in having a variety of interesting backgrounds, character, monster and world sprites on screen. The top-down perspective type view is used when in a village, out on the island or in a dungeon, it's again typical of many JRPGs and works really well. Following the same pattern, the battle graphics are side-on and again feel just right. The character and monster colours used are quite dynamic and appropriate, though I thought some of the backgrounds, especially in the battle screens, could have done with more variation and dithering instead of leaving big areas of the same colour.

In terms of sound and music I would have to say Wyvern Tales is a bit of a let down. I counted just a handful of tunes - world map, village, inside building, dungeon and battle. The music itself is good, nicely composed and all of the tunes feel like they belong together - there's just not enough variation. Similarly for sound effects, there's liberal use of them, what exists works well, but there is no richness and variety. My understanding is that sound was added much later to the game and there wasn't going to be any music originally, which explains this deficiency. However, my biggest complaint is that whenever you interact with something or open a menu, music stops. This was very disorienting and took away from the immersion of the game.

Controls are straight forward and feel very familiar to the genre. On the map, town and dungeon screens you use the D-pad to move your character, the map scrolls with you in real time. When you walk up to a cave or town, this new area is loaded automatically. In same cases entire large sections of the map are loaded by walking up to certain edge tiles, unfortunately these are not indicated so it can be a bit confusing when this transition happens. Some parts of dungeons require buttons to be activated, which is done by walking up to them and pressing the A button. On the menu screens, A is used to select/confirm and B is used to go back. Nice and simple!

Overall, Wyvern Tales is a fantastic addition to the Atari Lynx game library. Being the only game of its kind on the platform also adds to the appeal. With its save feature, nice graphics, decent sound and very addictive game play I would say this game is a must if you are still playing Lynx in 2018. Of course the story is open for a sequel and I do hope that Jasper comes up with one in the near future.

Score Card
Graphics:
9
Sound:
5
Controls:
9
Challenge:
8
Playability:
8
Overall:
8.5
See Game Review Standards and Ratings for scoring details.
♥ Did we get something wrong or you have something to contribute? Please tell us about it!
You can find Atari Gamer on...
Be sure to follow for the latest Atari Lynx news, updates, stories and photos!
[ Don't show again ][ Dismiss ]
Loading...
10
Close