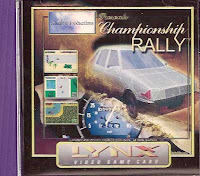 I, for one, love top-down racers. I don’t know why; I’m not even a particularly big “driving game buff”. But there’s something about miniaturised little cars racing around tracks that just clicks with me. Maybe it’s the influence of the game ‘Micro Machines’, which was a huge hit on the older, 16 bit home consoles in particular. In any case, if you like that kind of game, you just might enjoy ‘Championship Rally’.

You can thank the talented people associated with Songbird Productions for this aftermarket title. In fact, it appears only two people made this game, which is pretty extraordinary in itself. The aim of the game? To race your little car "tournament-style" against the opposition, and to conquer the 7 tracks on offer. Not all of the tracks are available straight away; you’re going to have to unlock them first, by placing high enough on the ladder to open them up. So, get ready for some Lynx racing hijinks, for all ages and skill levels!

‘Championship Rally’ features some pleasant graphics and, especially, some vibrant uses of color. Whether it’s the title screens, the options menu or the racing itself, the visuals are never drab. This is especially true of the vehicles themselves, which are bright and easily visible on the diverse tracks on offer. Sure they are a little small, but there is sufficient detail in these cute little vehicles to make everything easy on the eye. And though there are only 7 tracks, they're all distinctive and feature their own particularities and hazards; palm trees and potholes, anyone?

Visually, you’ll need to keep a close eye on the various on-screen meters and indicators to maintain your success. The micro-map allows you to see your car (and other cars) on the track. There’s a lap counter, so you know your progress. And watch that damage meter! Should your car start to get flaky, you'll want to find a repair wrench icon, found somewhere on the road. Watching all of these on-screen indicators can be challenging, especially when your car moves at a speedy pace.

Although this is a racing game with a lot of ‘brrrrm!’ sounds, I should say at this point that I would have loved some in-game music; but sadly, there isn’t any. Thankfully, what you DO get is a nice series of engine noises, effective collision effects, and the all-important ‘DING’ when you complete a lap. So that’s all good. But I’m left with that lingering feeling that something more could have elevated the experience in this area. Crowd noises? Tyre screeches? Pumping background tracks? These aren’t there, but overall, the audio is passable and certainly appropriate.

The controls, to me, are so-so. Technically, like all racing games, it’s about getting used to the feel of the sprite (car) you are controlling, so that you can slowly improve. Whilst I found myself getting better and better with time, the steering feels like it is too wide an arc. If you mistime a corner, it’s into a wall, gravel patch or palm tree for you! And that puts you behind the pack very quickly. A lot of practice is needed to beat the fastest of the 3 opponents that you face. However, when you practice your skills in "non-tournament" modes, you CAN adjust both the player and/or the CPU controlled vehicle acceleration and top speed; so there is that! There are tons of other options too, like choosing the color of your car, how much damage you can sustain, and so on. All this customization is brilliant, generous and gives the game a modern feel.

Downsides? There are a few. The on-screen micro-map is not as clear as the ‘Checkered Flag’ equivalent. There's a lack of visual effects (like sparks) and no backing music. And, there's the wide turning circle of your vehicle, which can get frustrating. An in-game shop with different controlling vehicles would have really mitigated that aspect, actually. Or, having the option of "adjustable speed" and "adjustable acceleration" present in Tournament races, not just the practice modes. Additionally, it would have also helped to have some signs and indicators on the roadside to tell you when to turn. I realize racing isn’t meant to be an easy sport, but some tracks have multiple paths and, if you get your directions wrong, you might as well restart the whole race.

But on the plus side, ‘Championship Rally’ overcomes these issues by getting right A LOT of the factors that ‘Super Off Road’ got wrong. There's no collision detection or obstacle issues here, which ‘Super Off Road’ had on nearly every track. Sure, there are tricky obstacles in 'Championship Rally', but the gentle vehicle "rebound” during collisions will ensure you don’t get stuck on them! And unlike ‘Super Off Road’, speed boosts don’t affect your controls or throw your car forward too quickly. Even better, the password system means you can save your progress, which is a massive advantage and makes ‘Championship Rally’ an effective vacation game. Note also there are options to complete "Time Trials" (racing yourself!) or a "Single Race" contest - both brilliant ways to add variety and practice elements to the game. And did someone say tracks could have… shortcuts?

In all, if you like top-down vehicle games, this is the best one on the Lynx, and certainly better than ‘Super Off Road’. I would have loved some graphical, audio and control additions here and there; and alright, especially a track editor! But what you get here is a fun, solid little racer with enough customizations and practice modes to put the chances of winning more in your favor. Mastering all the tracks is the key here; and that’s what makes this title a challenging and authentic racing experience. Sure, 'Championship Rally' doesn’t reach the lofty heights of Songbird Production's 'Cybervirus'; but it's still one of the more impressive aftermarket titles on offer.