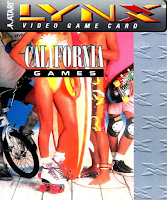 Back in '89/'90 I received an Atari Lynx for my birthday. One of the first games I played was California Games. Wow I thought. I played and played this game. The music, colour screen and graphics blew my mind. I couldn’t help but feel smug as I was the only person in my school who owned an Atari Lynx and sniggered at the Nintendo Gameboy’s dull green screen and a block game called Tetris. Well, we all know how the Lynx Vs Gameboy battle played out so let's not go there.

So fast forward 30 years. I've bought another Lynx. I'm a fair bit older and can afford to buy my own games now instead of begging my parents for them. I've modded the screen with an up-to-date LCD screen. I've bought a copy of California Games......will it live up to my expectations or am I stuck in nostalgia-land.... let's re-visit California Games in 2021!

Looking at the box it’s bringing back good memories already, a Californian summer vibe, not that I've ever been to California. Four sets of legs with a BMX, Surfboard, Skateboard, Roller skates and a Frisbee. (The Frisbee and Roller Skates didn’t make it on this version although you do see the Roller Skater on the scoreboard section.)

So, let's pop the game cart into the Lynx. I push it in and get that familiar but satisfying feeling of the card slotting in to the back of the Lynx. Time to turn the power on and hopefully relive the good times of my childhood.... or will I end up disappointed?

There it is! The spinning Californian licence plate. The unforgettable ‘Louie Louie’ tune pumping out of the Lynx speaker. The blue sky in the background. The new LCD screen really makes the colours pop. That magic feeling you get as a kid comes back just for a few seconds... I've always thought of this game as 4 mini games. BMX, Surfing, Halfpipe and Footbag. They are separate events and the scores do not automatically add up.

First up is BMX, graphically it is really good and nice to look at. The bike route is a downhill dirt track you must navigate, avoiding multiple hazards along the way. They are made up mainly of bay hales and what look like logs. There is greenery to the side and the colours look great. The soundtrack to this game is catchy, really suits the game as you're hurtling down the hill. You will spend a lot of time falling off the bike at the beginning. Once you have had a few attempts you will learn where and what hazards are coming up and what to avoid. The gameplay is really fun and can get quite frantic once you build your speed up. The point of the game is to get to the end of the course, scoring as many points as you can along the way, by doing tricks on the bike. The game runs on a timer, there is no energy bar or lives so falling multiple times will not end the game (you will see why as falling off the bike at speed sends you sliding across the ground for a few hundred yards which would end in instant death IRL!). An absolute blast to play. I can usually score around the 600 mark.... on a good day.

Next up is Surfing. It looks better than I remembered, maybe it’s the upgraded screen but boy does it look good. The graphics on this game are really something else, the fluid movement of the surfer and waves make it really feel like you are surfing the sea. The controls are responsive and easy to grasp. You play as a blonde, muscle-bound all-American surfer in green board shorts riding a pink and yellow surfboard. The soundtrack again is brilliant, you could close your eyes and instantly match the Wipeout music to Surfing. The gameplay is really fun. You must ride along a large wave, gathering speed and doing tricks, mainly multiple 360 spins, flying into the air above the wave. It's an easy game to get into and you will be doing quadruple 360s before you know it and maybe even score a few ‘unreals’. Again, there is a timer and no health bar, the difference in this game is that you only get 3 lives, so each time you fall off your surfboard you lose a life.....so make them count. This is a really enjoyable game, a joy to look at and listen to. I can usually score around the 10k mark if I don’t fall into the Californian sun-soaked sea.

Moving onto the 3rd event on the cart – The Halfpipe. Again, I like the graphics in this event. Not as impressive as BMX or Surfing but still looks good. The event is set in the Californian hills in front of the iconic ‘Hollywood’ sign. There is a Halfpipe skate ramp with a few friends watching you skate. You play a Skateboard dude who rides a yellow skateboard and sensibly wears a helmet in shorts and T-shirt. The purpose of this game is to ride the ramp performing tricks which consist of handplants and spins/jumps. I would say for me anyway, this was the hardest out of the 4 events to master. It took me many, many attempts to understand what I needed to do to obtain a decent score and not constantly fall off the skateboard in a pathetic heap. Now, once you understand the controls this event is a whole lot of fun, the amount of air you can get is insane and gets very addictive! A tip is do not bother with the handplants. They slow you down and do not score as high as the jumps. You get a timer and 3 lives. I can score around the 26k mark at the very most.

Onto the last event – Footbag. Now this is my least favourite event out of the 4. The graphics are ok, not as good as the other 3. You're set-in front of a landscape of a city, bridge and river. You really need to concentrate playing this one, I find the background is not easy on the eyes when doing this (maybe it's my age!). You play a male, who has a small ball (think keep me ups soccer) the aim is to keep the ball from falling to the ground. You do this by doing multiple kicks, knees and various other moves. The longer the ball is kept off the ground the more points you score. There is a little seagull that flies past you every so often, hit him on the beak with the ball for extra points, hit the gull anywhere else and your ball will be sent back down to you at a weird angle, which may make it hit the floor. As I said this is my least favourite event but that doesn’t mean I don’t like it. It's quite fun and can get pretty addictive chasing a good score. There is a time counter and when this runs out it is game over. On a day my eyes are working I can score around the 70k mark.

So that’s it. All California Games events played through. Was it just a great memory as a child and really as good as I remembered it? Does it stand the test of time? Or was I just California dreaming.......

After many hours playing through the events I can honestly say - this game is even better than I remembered it! The graphics for the time it was released are brilliant. The soundtrack to the game is perfect. Out of the 4 events I would say that BMX and Surfing are my favourites, followed by Halfpipe then Footbag.

This truly is a timeless game for me. It showed off the power of the Lynx and every kid should have had the pleasure to play this at least once. I believe the idea behind handhelds were that they were made for pick up and play games - for on the move, in the car, a break at school or work. I have never played a game that has so much pick up and play fun. You can switch the Lynx on, play through all 4 events within in 15 minutes or just zip through a 3-minute event and get back to what you were doing. It’s a game you can play every week and never get bored. Totally replayable time and time again

This really is the ultimate pick up and play game, I do not see anything else out there that comes close, even in 2021. A must have for anyone with an Atari Lynx. 9.5/10.