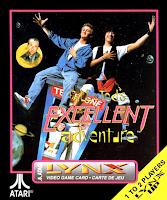 DUDE…TWENTY SEVEN YEARS! Twenty seven years I've waited to play this game! No joke. 'Bill & Ted's Excellent Adventure' on the Lynx was very tough to find in my neck of the woods when I was young, and it wasn't until I had finished study and entered the workforce in the following years that I thought "Hey! I STILL haven't tried that game!" So I searched the web and snagged a copy, ready to experience the game for the first time.

So here it is, my definitive review of ‘Bill and Ted’s Excellent Adventure’, a title that many refer to as the Lynx's first RPG. For the uninitiated, this game is based on the 80’s classic films about Bill and Ted (where one of those actors was played by a young Keanu Reeves - and who acted nothing like his future Neo character in ‘The Matrix’). The goal of the game is to rescue their two babes from the Grim Reaper, which involves you finding musical notes (for your guitar) and phone book pages, so you can travel through time.

If that’s a little hard to follow, in reality the game is a little like a mix of a few different Lynx titles... 'Chip's Challenge', 'Gauntlet III', 'Crystal Mines II' and a bit of the homebrew 'Wyvern Tales' thrown in. There’s something intrinsically ‘Zelda’ about this game, particularly ‘A Link to the Past’ on the old Super Nintendo system. And that’s a very good thing! Once I started to play this title in earnest, I instantly felt a hit of nostalgia for the old 16 bit JRPGs of old, which this title achieves without losing the essential “Lynxness” of the system's catalogue. Nice!

Graphically, ‘Bill and Ted’s Excellent Adventure’ is very cool in its “top-down” perspective. The characters are pretty small, as are the monsters and civilians, but everything is visible overall, and the graphics show a nice level of detail. In Egypt, the pyramids are impressively represented, and the water and fierce creatures are immediately noticeable. As you go on your bogus journey, you’ll locate special items, and these are all pretty easy to spot. There’s nothing “knock-out” visually to see, but things look great for a retro adventure. It’s nice to see how different the scenery looks as you walk about, waddling through labyrinths and chatting effusively to the various people around. Everyone seems happy to see these guys!

There’s also some pretty nice sound to round out the journey. I liked that there was both music AND sound (both very good) but there’s also the option to turn the music off if you like. Probably a good option if you are in a plane and the old lady next to you is pouring over your shoulder trying to work out what you are doing. Just say to her “BE MOST TRIUMPHANT DUDE!” and she should understand the reference. The sound effect of picking up an item I really liked, and it sounded like a similar effect used in ’Zarlor Mercenary’ - anyone else think the same?

When it comes to controls, you can tell that the game designers thought hard about how to make the game as easy as possible to play and the most fun possible. You can choose to be Bill or Ted. Your steps are also counted, for each character! You can either walk or run, which means you’ll never feel like the action is too slow. There’s no “fire” button, so you either need to escape the monsters or use one of your special items on them. As you collect these items, you might not immediately know where to use them, but equipping them will often give the required result. For example (tiny spoiler alert), you might want to use the gold nugget to…you know…bribe someone to get into a building? That’s all you’re getting from me!

Good games all come down, of course, to the gameplay. And thankfully, I liked ‘Bill and Ted’s Excellent Adventure’ quite a bit. The time machine elements can be a bit confusing, with the idea of objects being more relevant in different eras than others. But that’s all part of the puzzling experience of the game. The cartoony representation of the characters is something I liked the most, from the in-game speech bubbles to the cracking title screen. You don’t need to watch the films to enjoy this game, but fans will certainly enjoy the references and the pictorial style. Plus, there’s an awesome multi-integer password system that saves your progress extraordinarily well, remembering how many items you had and your individual progress. Something 'Dracula: The Undead' could have had, but didn't!

If there are any disadvantages of this game I should mention, there are only really two. The first is that the game really throws you into the thick of the action without much explanation, and when the puzzles are this complex, it’s hard to really make much headway without finding a guide. The second issue is that it’s pretty easy to die, and that this places you back at the last spawn point to begin the action once more. A bit frustrating. Then again, the game is pretty kind, in that you don’t lose any of your items and you have infinite lives. This ain’t ‘Batman Returns’! Combined with the password system, the only way you won’t eventually advance in the game is if you get too annoyed with it.

Overall, it’s pretty easy to recommend the unexpected fun of ‘Bill and Ted’s Excellent Adventure’. I had a ball reliving the RPG/adventure style of this game, that was all the rage in the 90’s. I used to play the same kinds of RPG/adventures on various other consoles, and they are still as enjoyable as ever. Why did we stop making these kinds of games, particularly when they are this good? Even though the toughness of the difficulty and the lack of guidance create some barriers, the actual experience of ‘Bill and Ted’s Excellent Adventure’ is generally a real blast. And hopefully I won’t have to wait another twenty seven years to complete it: BOGUS!