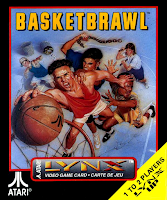 The scores are tied... we are into overtime... the home crew are looking tired, the away team is armed with a chromed length of chain... but the home crew seal the victory with a two-pointer, right after they hurl the ball into the opponent’s face!

I honestly did not expect to enjoy ‘Basketbrawl’ as much as I did. I’ll get that off my chest early. For years I heard nothing but bad reviews about this game... except for ONE particular online reviewer; and that guy called ‘Basketbrawl’ his number one favourite Lynx game! Was the majority correct on this game, or could I possibly agree with this one reviewer against all the others? There was only one way to find out. I jumped onto the couch, slid in the ‘Basketbrawl’ cart, and got ready to rumble!

This game is, right away, extremely funny. ‘Basketbrawl’ is a title that doesn’t take itself too seriously, that’s for sure. The beginning title screen has one of three random players getting knocked out by a basketball, even before you start the game; it’s hilarious! There aren’t any pre-game options except to enter a password to a level you are now up to (a terrific feature given the tough challenge). Whether it’s a beginning level or a later level, you inevitably are thrown onto the degraded court to play the roughest game of basketball there is. Prisons have nothing on ‘Basketbrawl’. This is a no-holds barred competition played by the craziest of crazies. Be prepared for some bruises!

Okay, so what do you need to know to play this game? Not a huge amount. The highest score wins. Shoot the ball in the basket on your half of the court. If you see a weapon or power-up, pick it up and use it. If you see the referee come towards you, run away (he beats you up)! Defend in your opponent’s half of the court, and do whatever you can to get the ball off him (all physical attacks are allowable). If you knock him out, try to shoot as many hoops as you can on your side of the court, before he wakes up (they will all count toward your score). And last of all, win the match so you can face the next round of weirdos!

The graphics in this game are actually pretty nice. Sure, they may look a bit gritty. But this is a street-based sport with scum and rubbish strewn everywhere, so the setting works. Player sprites, while small and not much to look at, are well animated, and the scrolling of the basketball court is surprisingly smooth. The ball is easily visible, as are all the players, and even the score and shot-clock are simple to see during play. Even better, the courts that you play on will change depending on the district side you face, so you can be prepared for some fairly disparate terrain to run around on. The well-drawn cutscenes of other teams mouthing off at you, trash-talking your playing side, is pretty amusing, and it’s all part of the funny (yet brutal) spectacle that ‘Basketbrawl’ is. Its not unusual for the game you are playing to dissolve into an all-in brawl, with no thought of the ball at the sidelines; which can make for an entertaining or nerve-wracking visual, depending on how much health you have!

There isn’t a lot of music in ‘Basketbrawl’, which is a bit of a shame when you hear the funky little ditty on the title screen. That said, other basketball games like ‘NBA Jam’ (on other consoles) didn’t have music either, so there’s no real criticism here regarding that decision. The sound effects, however, are well suited to this game. The ball dribbling effect is well done and never irritating, and the various other noises are entertaining, without causing any issues. Oh, and by the way, you’ll often hear sounds of fighting when you can’t SEE a brawl; that’s just the ref stepping in to attack the CPU opponent! He is completely non-biased and attacks the computer opponent with the same vigour; it’s a scream! There’s no doubt that some speech and crowd noise would have really enhanced this game and taken it to the next level; however, it’s not here, so we will leave that observation to one side. Overall, there’s not too much to complain about sound-wise, apart of course from the desirable additions afore-mentioned in this paragraph.

Probably the best aspect of the ‘Basketbrawl’ experience is how well it controls. I never had any issues getting my player to do exactly what I wanted. The movement, speed and attack motions are responsive and exactly as you’d expect them to play out. Shooting the ball, either in the key or outside it, is as easy as a button press. Attacks are numerous; you can even hurl the ball at the opponent as a weapon! Other offensive manoeuvres are similarly easy to carry out. You have to “line up” your player to attack someone else, with all sorts of grisly weapons found on the court, but if you get yourself distracted just fighting everyone, you won’t have time to shoot hoops. This is where ‘Basketbrawl’ actually has some clever strategy; you must absolutely balance your offence, defence, and goal scoring. If you are too weighted in any aspect, or ignore the on-court power-ups, you’re likely going to lose. And matches get harder and harder as you progress, so practice is definitely important in order to properly advance in this game.

So with as many negative reviews as there are about this game, what are the criticisms of ‘Basketbrawl’? Well, let’s start with the obvious ones. You can’t dunk. There’s no real passing, as it’s just “you versus them”. And it’s not a “true” basketball experience; no official NBA license, no thoughts regarding “travelling” with the ball, no code violations or other such rules. ‘Basketbrawl’ is its own game, and fans of the official sport may well be divided on whether or not they play the game purely because it’s not a realistic representation of basketball itself. Mind you, the game design does show you that an NBA-style game would be EASILY possible on the Lynx, given how well the game engine works here. It makes you wonder whether the fact that this game wasn’t “traditional basketball” did hurt its marketability at the time.

But you know what? I was shocked out of my system with this hybrid sports game, as I really enjoyed it. The bad press about ‘Basketbrawl’ made me wonder if I’d even like small aspects of it, but in the end, I found it gut-bustingly hilarious. There’s a lot of thought-out button mashing in this game, and you need your wits about you every second to attack, steal the ball, knock out an opponent, grab a power-up, defend, and evade the mad referee. It’s funniest when a free-for-all melee takes place, until human and CPU players semi-consciously waddle to the ball so the game can go on. Even with the sameness of the play in each match, no two games are the same; you are expected to bring your best skills, or you’ll soon hit the turf!

In all, ‘Basketbrawl’ is a fun game that I’d recommend to both sports and non-sports players. Don’t worry, you don’t need to know a lot of basketball rules; this game doesn’t respect them anyway! Though the simple graphics and lack of music might at first dissuade, wait til you get into the action; you won’t know what hit you (literally). Honestly, I’m intrigued to know what my next opponent’s court is going to look like, and how tough the next match is going to be. And a game that has me hankering for the next round must have something right. ‘Basketbrawl’ is a game that demands skill, patience, clutch play and... of course... a sense of humour. Sure, it's not a perfect game, but I do see what that one reviewer was talking about in terms of how fun the game is.

I gotta say, with much surprise... I agree with him!