Ever since the option to mod the screen of the Lynx has emerged, many who have invested in the item have given it rave reviews. McWill is the clever fellow who produced the product first, and now there is talk of a second product potentially entering the fray. If you like the idea of Atari Lynx games that are crystal clear on screen and with vivid colours, these kinds of mods are something you should really investigate!

That’s why today we are counting down some of the Lynx games that look just that extra bit special with the screen mod; we think they are worth checking out to see what they look like now, with all that full colour in your face. In no particular order, here’s a brief selection of Lynx game titles that benefit from this amazing technological enhancement!

By the way; this article is not an advertisement for the screen mod or any particular brand of screen mod. It’s just an appreciation for the effect this product has! Let’s go! 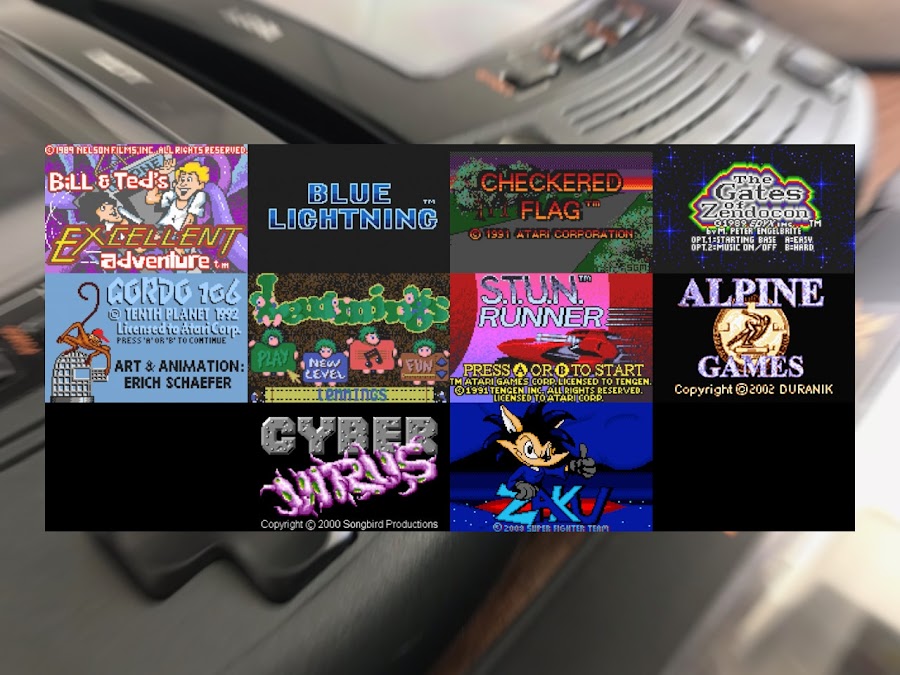 ‘Zaku’ is by far one of the most visually spectacular Lynx games ever made. The McWill mod simply amplifies the amazement factor. If you aren’t blown away by the detail in the foreground and backgrounds of each mission, just wait til you see those enormous enemy sprites in vivid colour. Yikes!

To see the awesome ‘Checkered Flag’ through the McWill lens is very exciting. The graphics come up crisp, with the tracks and their various obstacles looking so much better than could ever be imagined. And you start also seeing stuff you missed before; like the ultra smooth animation on the traffic light flag waver. Nice!

The visibility of the tiny Lemmings in this game is given a big boost through the new screen. Things are so much easier to see! There is almost a feeling that the Lynx version looks almost as good as the PC version of the game. The distinctive little animations of the main characters emerge clearer to the player. And that introductory title animation... superb!

To be fair, ‘Bill and Ted’s Excellent Adventure’ is a pretty niche game; a scrolling, top-down RPG with a lot of puzzling elements and time travel. The visuals on the original Lynx screen were always a little dull and one dimensional. Well, not anymore! The cartoony details really come out with the screen mod, especially the oversized speech bubbles and their ‘dude’ count!

‘Gordo #106’ is well worth checking out with a screen mod in place. The colours are bright, vivid and memorable, and the background animation in each stage is well worth seeing in full detail. What is truly surprising is just how complete a game it really is as a result; the music and challenge were always top notch, but now the visuals really level up!

To see this title running with the screen mod is gob-smackingly brilliant. It’s frantic, supercharged racing - now in bright rainbow hues. The pipes, jumps and speed boosts just look epic, and it’s worth 100% chucking this cart back in for a race or two. Or three. Hey, you won’t finish this game unless you master every one of the tracks like the back of your hand!

This one... well, it kind of goes without saying. One of the most impressive Lynx games visually (still!) is updated to glorious bright colours with the screen mod. Even if you have already completed the game, you may still get a kick out of booting ‘Blue Lightning’ up once more and seeing what the game looks like now. And it looks... well... very, very good.

I would heartily recommend experiencing this new FPS classic on the Lynx through the screen mod, just to see how it looks. It’s really quite brilliant to see how well the game plays on the Lynx with or without the mod, and the visuals stand out like no one’s business with the mod equipped (don’t get too distracted as you stomp your way across the scenery!).

One of the best quantities of ‘Gates of Zendocon’ was the visuals. Just superb. Well, prepare to have your mind blown with the screen mod! It’s nice to see all those little alien details and everything so crisp and sharp. By the way, some of these aliens are truly nightmare fuel; those green bees pretty much freak me out wherever I see them. Those and the vacuum cleaner aliens!

If you like the premise of ‘California Games’, then ‘Alpine Games’ is a title that may well interest you. Plus, prepare for the snow to come out looking brighter as you play though the mod! Once you get into the events, you’ll see exactly what the programmers saw when they wrote the game. And as ‘Alpine Games’ is so visually impressive, you’ll have loads of fun marvelling at the snowboard half pipe... it’s certainly a sight to behold.

There we go! Naturally every Lynx game comes out looking pretty nice with the screen mod, but this is just a selection of some choice cuts. What games do YOU like with the mod?

Let us know in the comments and join the fun!