Songbird Productions has really ramped up its Atari Lynx game publishing and we have a load of their recent games to look over and review. Before we get into actual game reviews however, we wanted to have a look at the production quality and compare it to the original Atari releases. We'll be looking at the game boxes, cartridges and manuals in this article. Later on we'll have follow-up individual game reviews where we'll focus on the game rather than its packaging.

This article is part of our Lynx Redux: Celebration with Songbird Productions and you can get a 10% off discount on Atari Lynx and Atari Jaguar games from Songbird for a limited time. See the details for the coupon code to use when checking out from the Songbird Shop.

First thing's first - the parcel that the games are delivered in. Because you don't want them to be damaged on arrival! Our load of games arrived in a cardboard box with bubble wrap on the inside. It was well packaged and there were no dints or bruises.

Since we had such a large number of games, they came packed flat. Game boxes were assembled and glued together already, but were simply folded. It was a matter of popping them into shape and we were done. This is how Songbird packages any orders that have more than a handful of games. If your order is just a single game, or two, those will arrive with their boxes fully assembled. 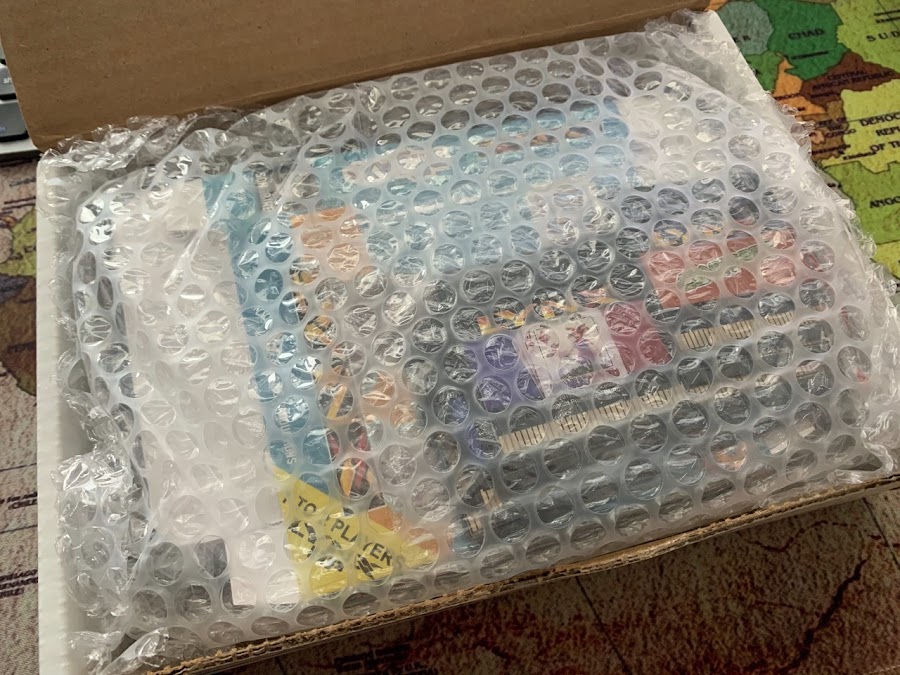 The very first thing you will notice about all Songbird Productions game boxes is they are shiny! The print quality is very nice indeed and they feel new and fresh. The shiny finish isn't exactly in-line with how the original Atari Lynx boxes looked like (they were much more matte) but they really do pop, it's cool. The cardboard is thick and sturdy, the top and bottom lid tabs are perforated on the sides exactly like original boxes, this makes them lock into the side tabs. Inside, the boxes have a cartridge holder, same as the original boxes. 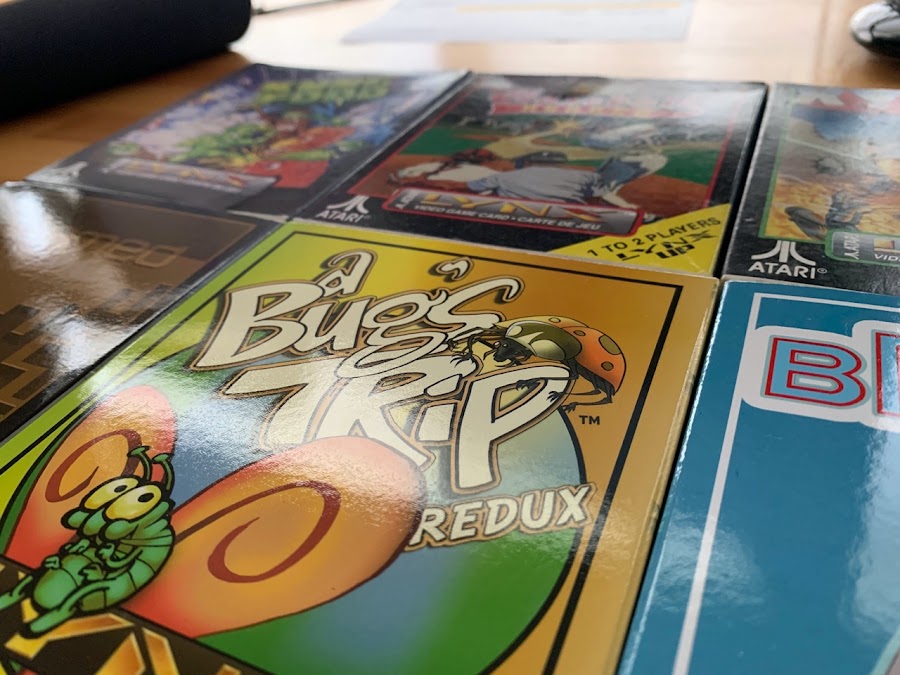 Cover art varies from game to game and generally looks quite well thought out and has a nice design style. It's great to see that ComLynx capable games have the same triangle in the front bottom right corner as the original Atari releases. The triangle shows how many players are supported in multi-player mode. What is very cool is that the back of boxes is also quite colourful, not for all games, but a good deal of them. Those boxes with colourful backs incorporate modern design elements, for example the lady-bug popping out on the top left corner of the 'frame', different screenshot positioning, gradient backgrounds, etc. Front and back, these boxes feel like an Atari Lynx box, on steroids. 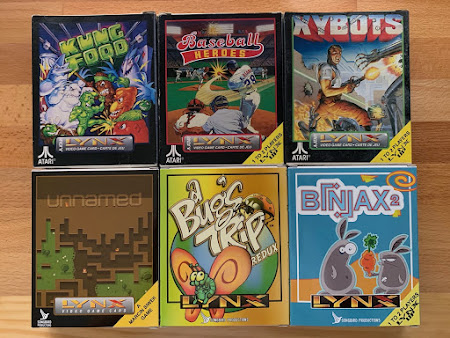 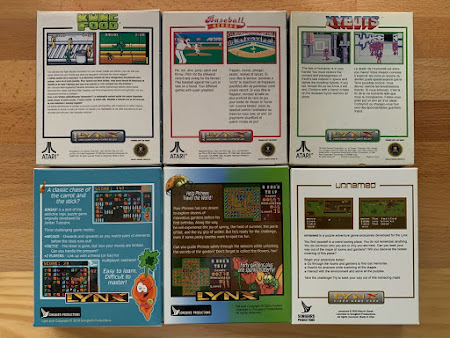 Sides of the box follow a similar formula as Atari's boxes, with the Songbird Productions logo clearly visible in place of the Atari logo. What's nice to see is the different styling used for game names, they don't just use the same font over and over. Atari, and especially Telegames did that with some of the games (e.g. Desert Strike, Rygar, Qix), but on the whole they used very similar style of text for each title. When comparing these side-by-side the main thing that does pop out is that the 'X' blue/grey background is nowhere to be seen, replaced with something unique to each game. 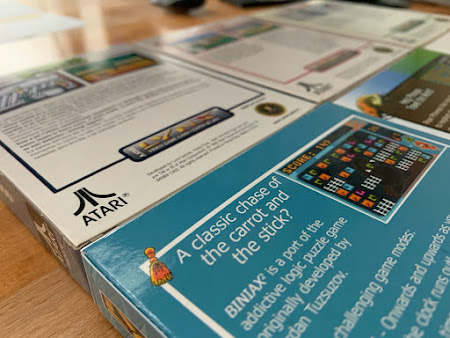 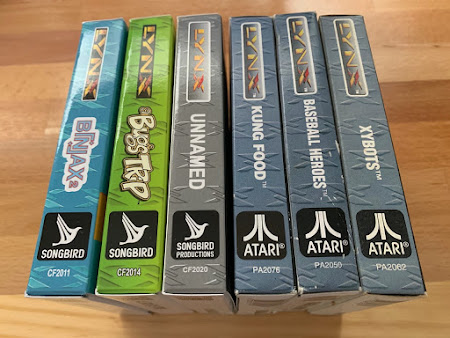 Top and bottom of the box again follow the same formula as Atari's boxes. However a point for improvement in the future would be to have all of the game names aligned to the same side. It is nice to see QR codes instead of barcodes though, that's very clever! 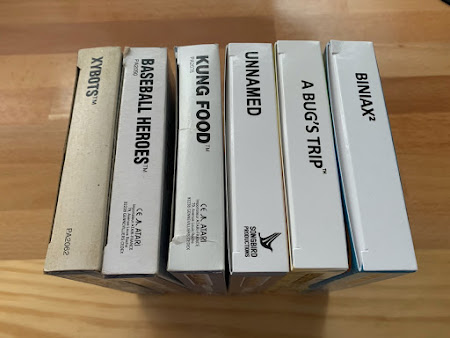 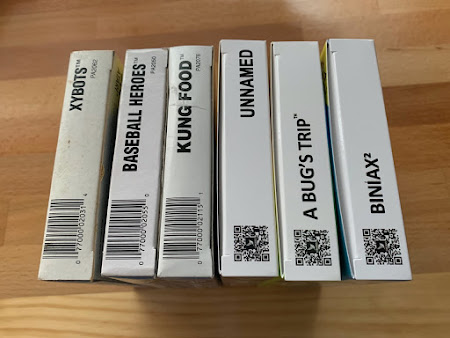 Back in October 2018 we talked with Carl Forhan from Songbird Productions about his game re-releases on curved lip carts. Since then Songbird Productions continued to release more Lynx games on the same style of cart. It really is a tremendous improvement vs the PCB style carts from their earlier releases. So let us take a closer look at these cartridges... 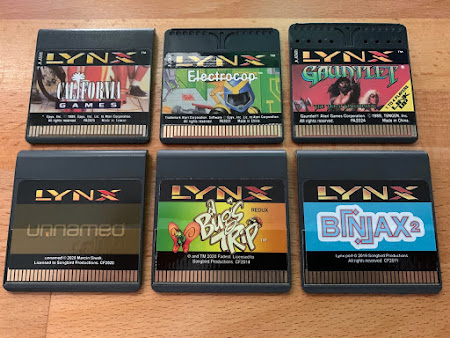 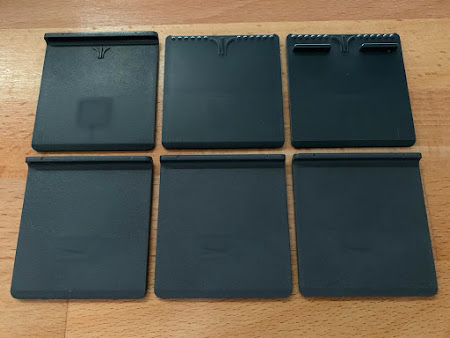 At first glance they are very much like the official Atari curved lip cartridges, but if you look closer you will start to notice differences. Where the Atari carts have the same bumpy texture to them all around the cartridge, Songbird's carts have a much smoother sticker side, akin to the Atari 'flat' and 'ridged' carts, though not as smooth. The back of the Songbird cart has the bumpy texture, but it is more coarse than the Atari version. There is no Fuji logo on the rear side of the cart on Songbird's carts, which makes sense for copyright reasons.

Looking even closer at the back side of the cart, Atari's versions have a square discolouration (due to thinner plastic there) for where the 'blob' ROM chip is inside the cart. Songbird's carts have two such discolourations, one for the ROM flash and one for the EEPROM, though in Songbird's case it's not just a discolouration but is an actual indent in the plastic. This is purely an artefact of the injection moulding process and the internal geometry of the cartridge, it doesn't impact its functionality. 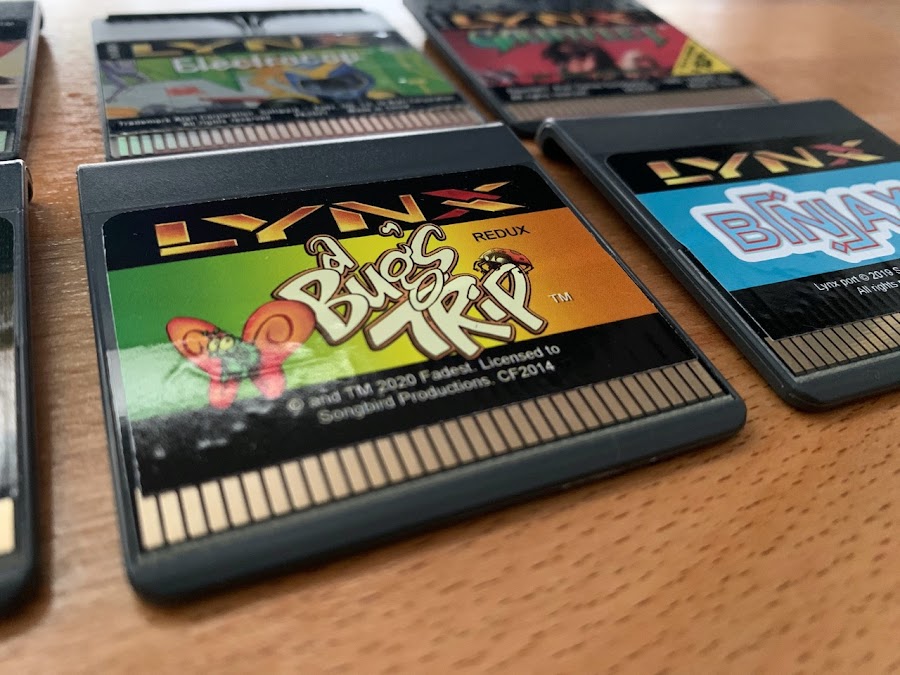 Back to the sticker side - and this is something we noted with the original release of Songbird's curved lip cartridges - the sticker does not cover as much of the front of the cartridge as it should. There is about a 1mm gap around both the left and right sides. However the PCB is black in colour now, vs the green versions earlier, so the effect is not nearly as noticeable. It would be nice if the sticker filled the entire space that is made for it, but it doesn't detract too much from the overall look.

One final note about the cartridge is the transition between the PCB and the flat sticker area is not as smooth on the Songbird carts. This is due to the thickness of the PCB used. If you read our page - "What's inside an official Atari Lynx cartridge?", you would have seen just how thin the Atari version of the PCB was, 0.4mm, compared to the 0.6mm Songbird versions. This extra thickness manifests as a step half way through the sticker, but otherwise doesn't interfere and the carts make proper contact inside the Lynx, which is what matters most.

Impressive! That's the only way that Songbird's manuals can be summed up. Each one is printed on thick glossy paper, features cover art from the box, game details and instructions, and they're just...very nice. The majority of them are colour but some, like the one for Unnamed follows the style of the original Atari manuals. Most of the manuals are the folded over pamphlet type, but where more detail is required of the game, they contain multiple pages stapled together, just like the originals. 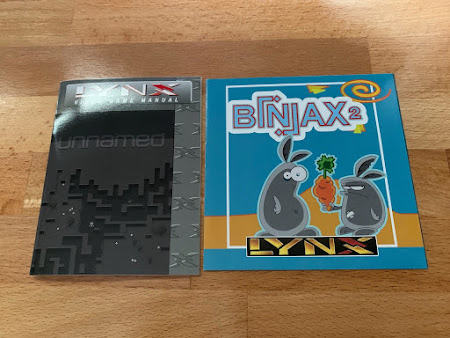 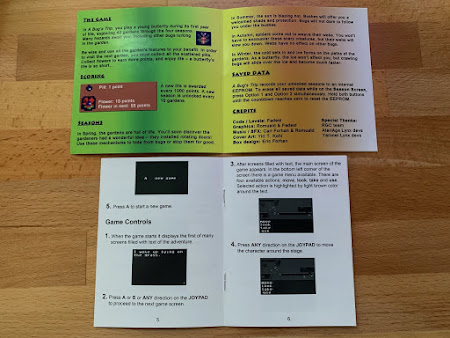 If you're a fan of the Japanese Atari Lynx releases, Songbird's colourful manuals will look very familiar. Sure the layout is a square, having roots in their CD jewel case packaging from the past, but they look fun and make for nice display items. 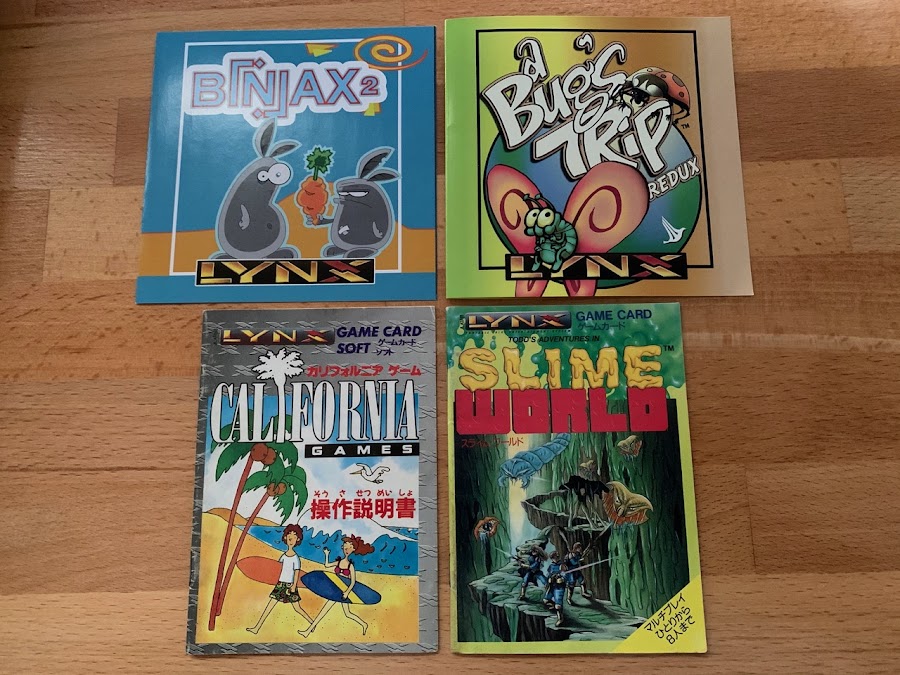 Closing and a word from Carl🕸

We spoke to Carl about Songbird's latest releases and he's had some interesting insights to share...

My brother actually does all the box layouts for me, and for most he does the color scheme, spine design, etc. to blend in with whatever cover art we have. I've also improved the manuals over time -- Champ Rally, Ponx, etc. tended to have a simple B&W interior design, but newer ones like Biniax, ABT, and Quadromania are much more colorful.

In closing, the overall production quality of Songbird's releases is great and it's nice to see that improvements have been made in the last couple of years. Songbird Productions keeps expanding their portfolio of Lynx games, so we'll probably see minor tweaks and enhancements to their boxes, carts and manuals in the future. You can keep an eye on all of Songbird's releases via our game database or their online store. Don't forget you can get a 10% discount from purchases this month, find out how here. 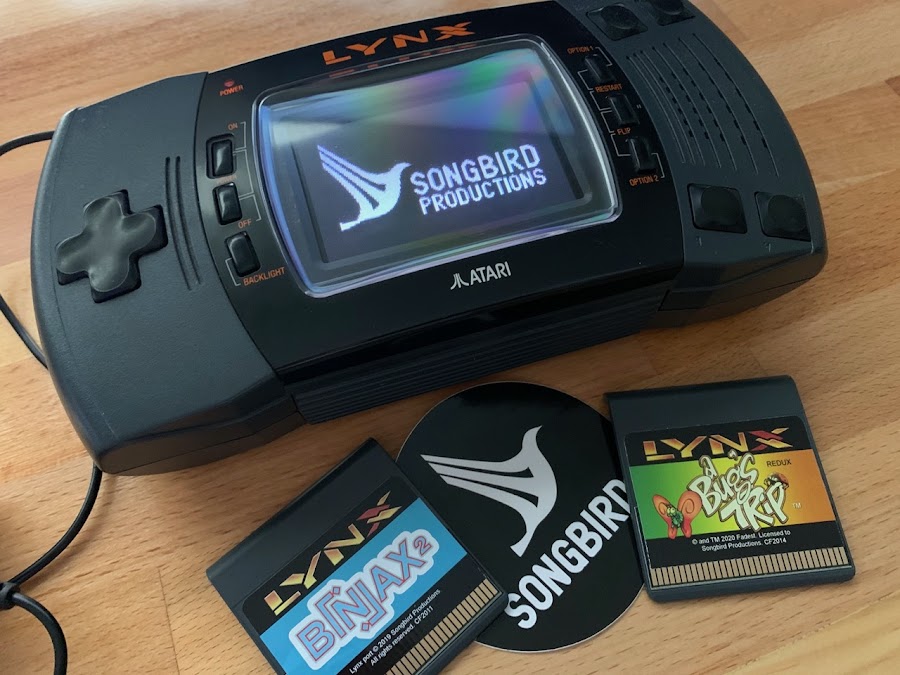 -AG
Tags: Interiew, Review, Songbird Productions
♥ Did we get something wrong or you have something to contribute? Please tell us about it!
Did you like what you just read? Please take a moment to see how you can support Atari Gamer. With your help we can keep this retro gaming website going and develop new content! Or just check out what else we have for you...
You can find Atari Gamer on...
Be sure to follow for the latest Atari Lynx news, updates, stories and photos!
[ Don't show again ][ Dismiss ]
Loading...
10
Close