Both the RetroHQ Lynx GD (GameDrive) and BennVenn's ElCheapo SD have been in active development this year and both projects have come a long way with some impressive features to boast. Both are also available for pre-order, Lynx GD from the AtariAge Store and Dragon Box Shop and ElCheapoSD from BennVenn's Store. AtariAge is actively shipping preorders already. If you don't know what these are - they're Atari Lynx cartridges that let you play ROMs from an SD card.

We've got both cartridges here at Atari Gamer and we're ready to put them head-to-head so you can have a better idea of what to expect when you pre-order one or both. Please note that the cartridges in this review are prototype versions and the final versions will be slightly different, this will be called out where appropriate. 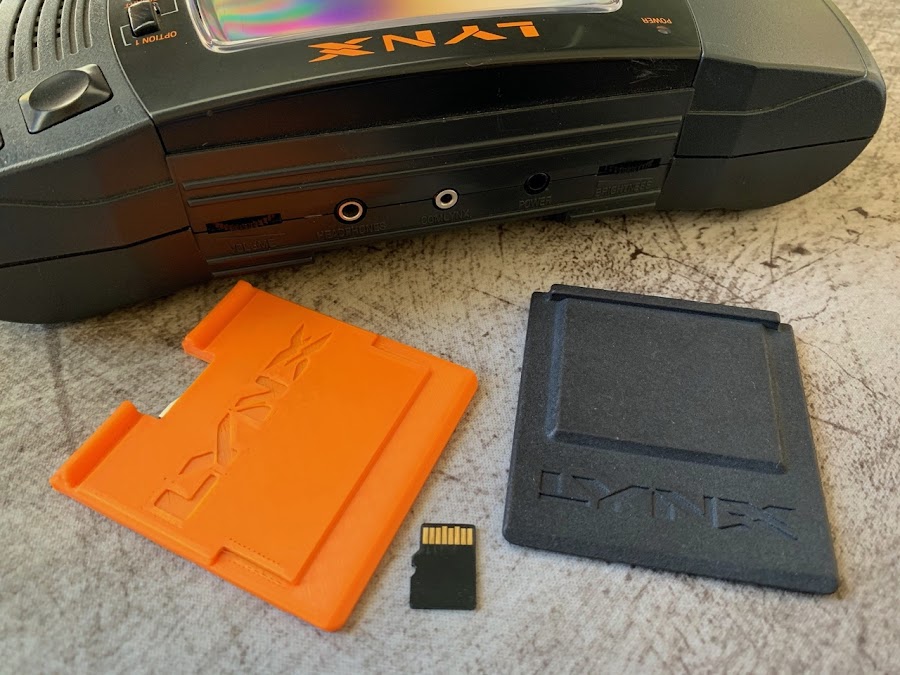 In this review the ElCheapoSD is the orange cartridge, the grey cartridge is the Lynx GD.

Let's start with looking at how these carts fit into a Lynx. We're using a Lynx Model 2 for this purpose, but both carts will also fit and work in a Lynx Model 1. You can see how it fits in a Lynx 1 further down in this section. Both carts allow the SD card to be removed with ease when inserted in either model Lynx.

Lynx GD has a neat shell, which is SLS 3D printed, the quality is quite nice and it has a textured/matte surface finish. There's a slot for the SD card in the top left corner (when looking at the cartridge face). The SD card slot is a spring loaded type, so the card clicks in/out. The cartridge has enough grip to stay securely in the Lynx but isn't so thick as to get stuck. 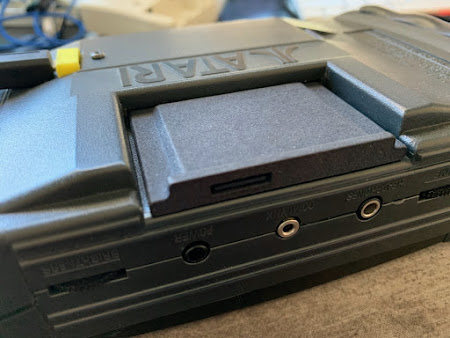 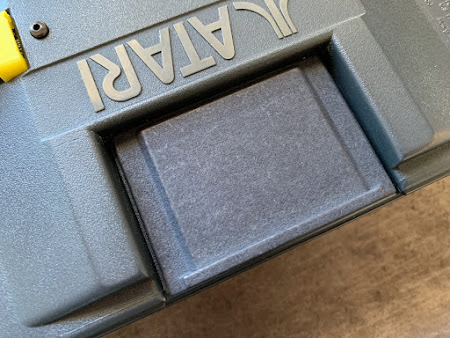 The ElCheapoSD unit we tested came with a 3D printed shell, but the final version will come with an injection moulded shell. The shell design is quite neat too, though the location of the SD card is in the centre of the cartridge, and it too uses a click mechanism for the SD card. The 3D printed cartridge was a tight fit in the Lynx, which we've been told will not be an issue in the final injection moulded version. 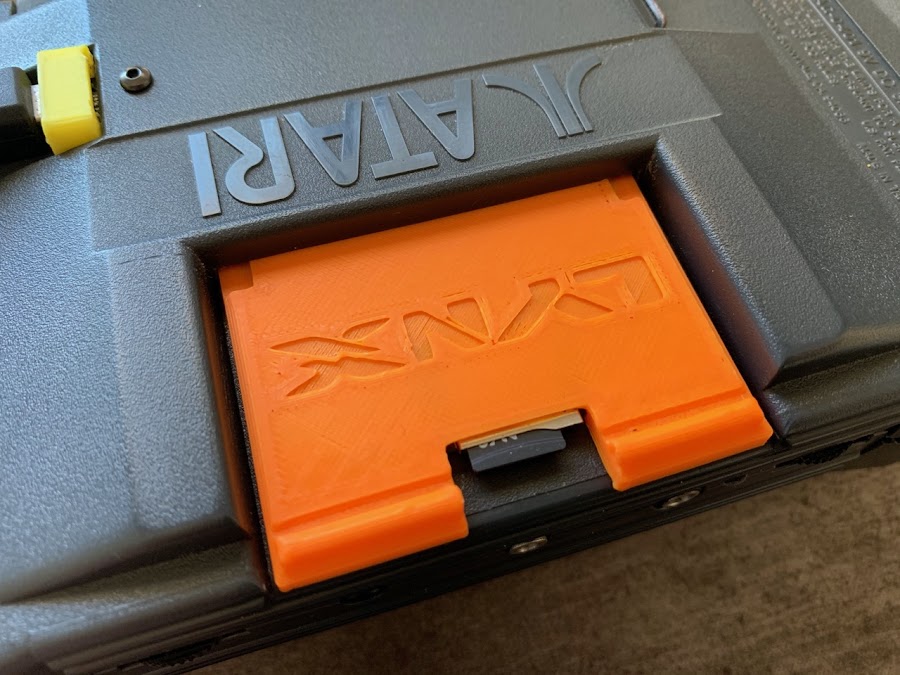 Here's the fit in a Lynx 1, the cartridge door closes neatly over both carts... 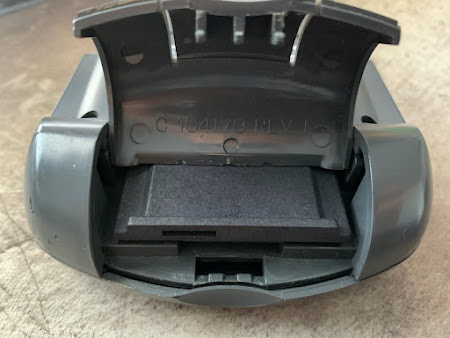 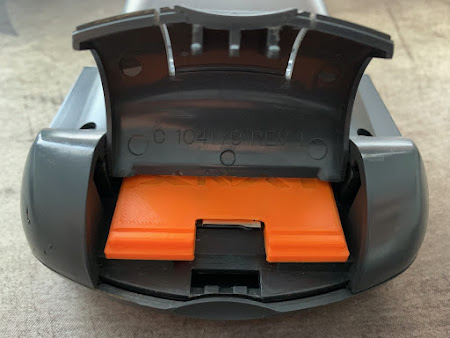 Since neither the Lynx GD nor the ElCheapoSD come with an SD card, you are required to first download the latest firmware for them. The end result here is the same but the way each cartridge implements this is different. This feature is to ensure that you get the most up-to-date firmware even if you happen to have received a unit from an older batch.

Prior to using the Lynx GD in your Lynx, you need to install the latest firmware from the RetroHQ website on it. This process is quite simple, scan the QR code on your phone and open the website it takes you to in a web browser on your computer. Click the "Download Firmware" button and then copy the firmware.upd file to the SD card you plan to use. When the Lynx GD boots up next, it will install the firmware from the SD card and you'll be good to go. The firmware update file is not required to be present on the SD card after this process.

You can also manually enter the website address, but just like us, you'll probably have issues picking out some of the letters in the font and will get a 404 error instead - use the QR code method.

The ElCheapoSD will have its internal firmware already on the cartridge when shipped, but will require the latest menu downloaded from the BennVenn website (or possibly support forum) and placed on the SD card. This is going to be a file named BOOT.bin and it must be present on the SD card at all times as the cartridge will look for it on boot up. The internal MCU firmware will also have an option to be updated via a different downloadable file, however this will not be used very often. The whole process will be outlined in BennVenn's store when the cartridges are ready to ship. 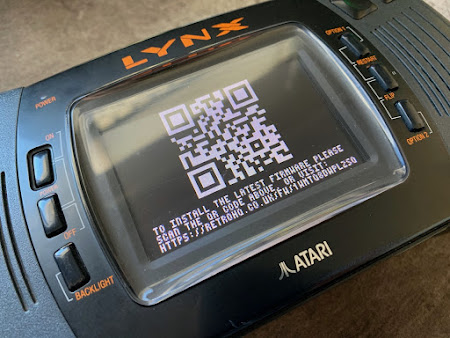 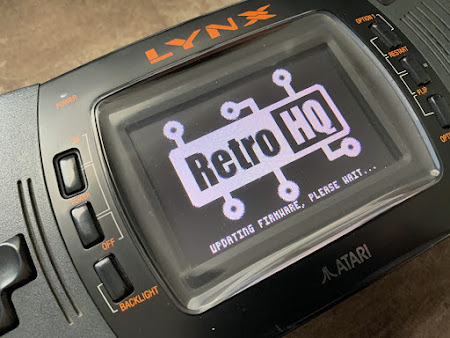 When there is no SD card inserted into either cartridge, they still do something! This is a neat feature and shows you instantly if the cart is working without you having to second guess the usual 'INSERT GAME' prompt. 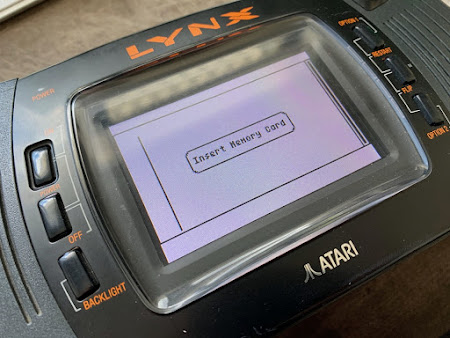 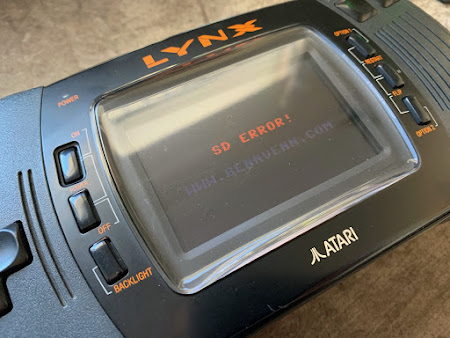 The menu system between the two cartridges is very different at the time of writing. The Lynx GD menu system has brought forward some of the nice aspects of the Lynx SD Menu Loader 2 that Atari Gamer has written for the Lynx SD (or Lynx GD Classic as it's referred to now), and then took it way further to blow all expectations out of the water.

The Lynx GD menu has a small font that uses antialiasing. This isn't a feature that we liked however as it makes it hard to read on the Lynx screen. There is directory navigation, click sound when changing selection, file type display, options and ability to invert screen colours. Some settings like file name scroll speed are adjustable too. You can also store thumbnail previews of each of the ROMs (see this AtariAge thread for the ROM image download pack). Your last selected ROM is remembered between boots. 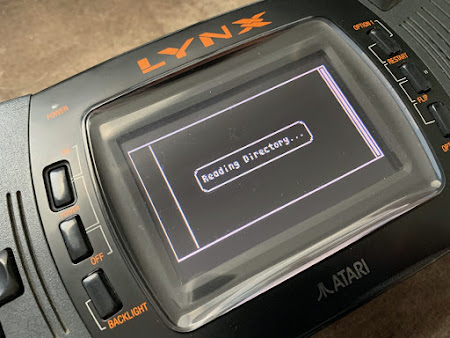 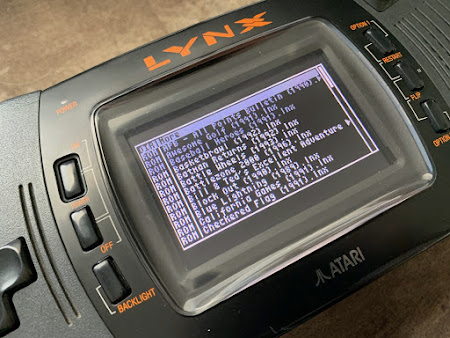 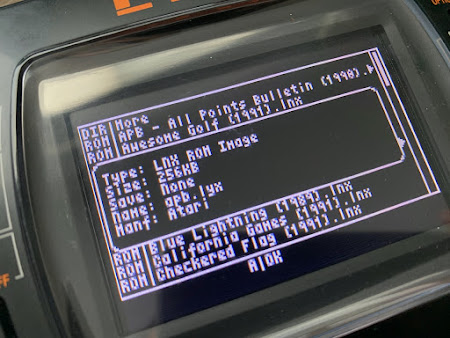 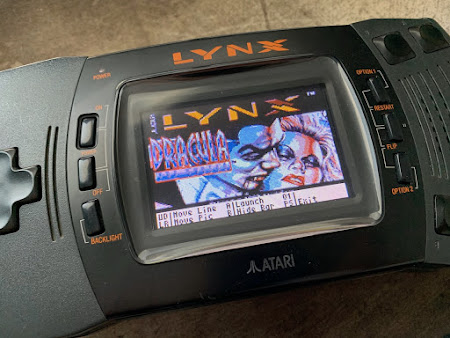 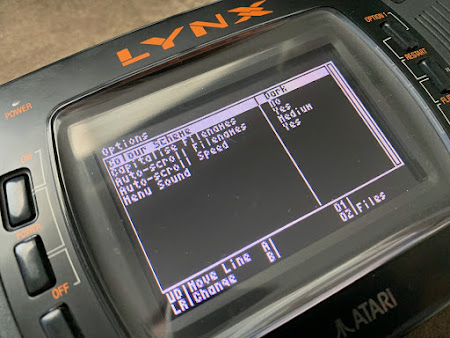 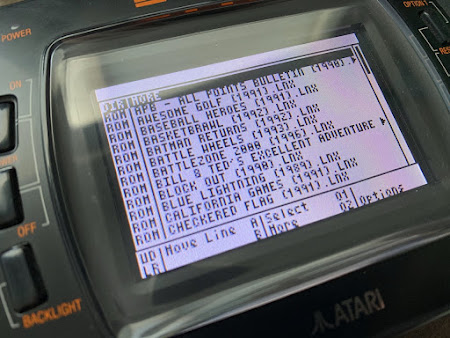 The most unexpected feature is the game trainer/cheats system. There is a small list of supported games so far, but RetroHQ is working on expanding this. For any game that is supported, the Lynx GD menu will display this trainer before the game is started, allowing you to select cheats like infinite lives, one-hit boss kills, etc. 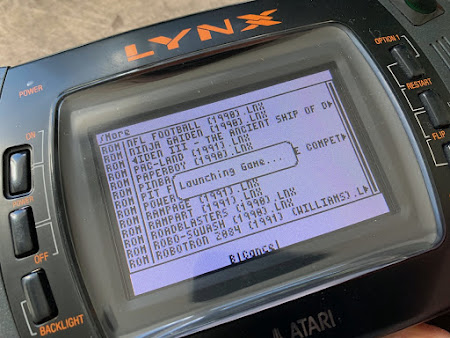 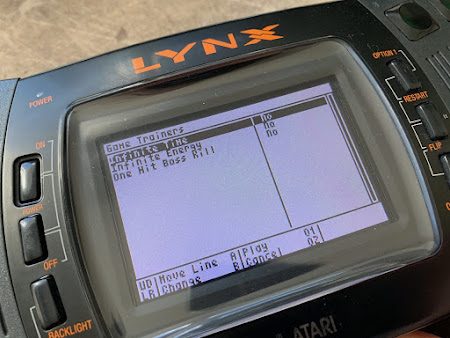 The menu system used in the ElCheapoSD is simple. It shows you a list of ROMs which you can scroll though, and it lets you launch a ROM. Simple and easy. It's a very basic system but it does the job. There's no directory navigation in the current version but it does remember the last launched ROM. There aren't any other configurable options at this stage. This menu system may be enhanced in the future if there is demand for it. 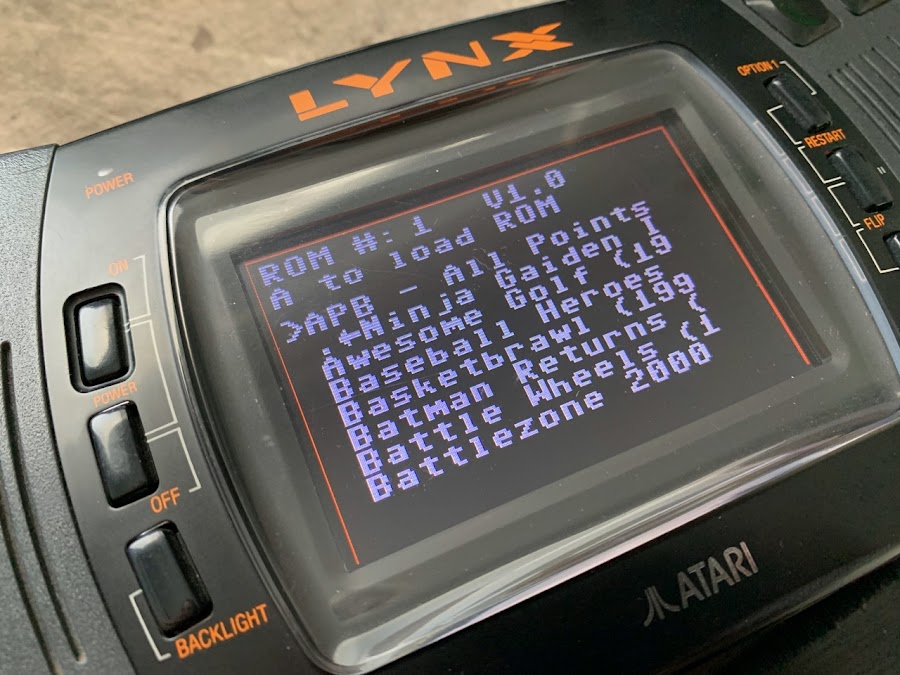 For any games that support the EEPROM save feature, both cartridges offer support for it. The Lynx GD does not have a dedicated EEPROM chip on board and it emulates an EEPROM, which is saved/restored to/from the SD card automatically when launching a ROM. This allows the Lynx GD to emulate any EEPROM chip. The ElCheapoSD has a 93C46 EEPROM chip on board and so will support saves to that type of chip only, this is an automatic feature too.

Here's what BennVenn had to say about how ElCheapoSD EEPROM saves will work - At power on, checks the last used ROM. If it uses EEPROM it'll move EEPROM to SD. If you load a new ROM, it'll load the new SD save to EEPROM if it has one, if it doesn't it creates the file for the next power cycle to save.

Note that the none of the official Atari Lynx games released ever used EEPROM saves and only the more recent home-brews started to use this feature. The vast majority of home-brew games to date use the 93C46 EEPROM.

Just like the Lynx SD, the Lynx GD will support the same SD Card API. The ElCheapoSD will not support this API and the API that is going to be exposed is targeted at writing custom menu loader systems, not for general purpose SD card file system access.

This is probably the most anticipated feature from both cards - both are FAST. Boot up speeds for both cards are near instant, directory contents are shown very quickly and it feels like you're playing from a real Atari Lynx cartridge. This was our main complaint with the original Lynx SD cartridge, so it's nice to see both carts offering similar levels of performance.

ROM loading speeds are around the second mark on the Lynx GD and the ElCheapoSD is a tad slower, but only by fractions of a second. Of course this has much to do with the type of SD card you are using, older SD cards will of course be slower. You also have to take into account how long it takes for the Lynx to boot a new ROM after it is loaded, which can be seconds, even on official Atari cartridges.

In terms of hardware, both cartridges have a microcontroller and SRAM at their core. They both achieve the same result but take slightly different paths to get there. The Lynx GD uses an Atmel ATSAMC21 with ARM Cortex-M0+ core for the microcontroller and feeds its ROMs into an ALLIANCE AS6C4008 SRAM (4 Mbit, 512K x 8bit‎). The ElCheapoSD uses an ARM STM32F103 with Cortex-M3 core and ISSI IS65WV5128EBLL SRAM (4 Mbit, 512K x 8bit‎). There is some other hardware on each cart to do with counters and voltage regulation, and of course the ElCheapoSD has a 93C46 EEPROM chip on it. The prototype versions are not ENIG plated but the final production versions of both carts will have ENIG plating to ensure that they don't damage the cartridge slot connector in your Lynx.

On the most part the actual specs of the microcontroller and memory are irrelevant. Both carts have nice fast controllers and memory, at least for the purpose of working as an Atari Lynx cartridge. Compared to the original Lynx SD, both cartridges are magnitudes better in performance, so 20+ second ROM loading times are a thing of the past now. 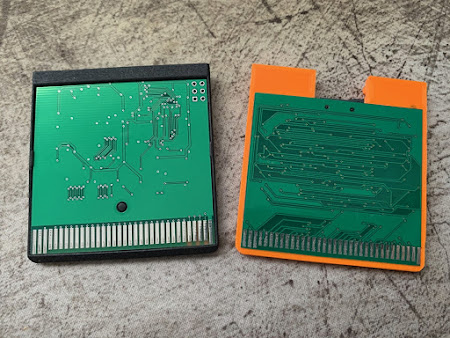 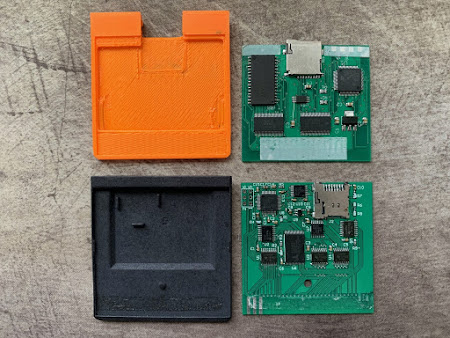 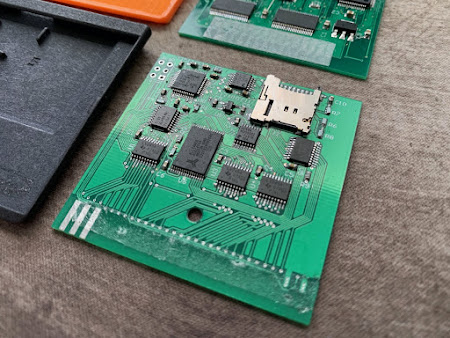 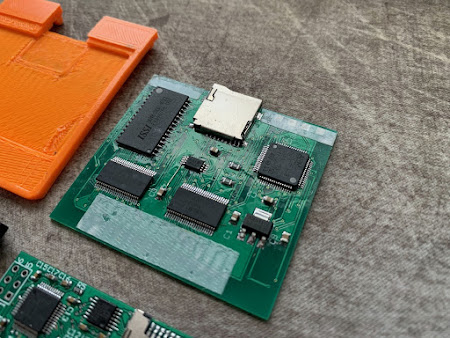 Price and Where to Buy🕸

As mentioned at the start of the article, the Lynx GD is available for pre-order from the AtariAge Store and Dragon Box Shop. The ElCheapoSD is available for pre-order from BennVenn's Store. AtariAge has confirmed that they are already shipping a limited amount of Lynx GD units with more batches to be shipped soon. The ElCheapoSD will be shipping around the mid-July mark, pending customs and delivery of components.

So which one will you pick and which features of each cart do you like the most? Leave your comments below!

Atari Gamer is not affiliated, nor sponsored by either RetroHQ nor BennVenn, these reviews are neutral and provide you, the reader, with just the facts. You make your own decisions on which product suits you most. We have however worked with both parties in the past and will continue to do so where an opportunity to contribute to the Atari Lynx scene arises and where we can help them improve their products.

-AG
Tags: Hardware Mods, Lynx SD, Review, SD Cart
♥ Did we get something wrong or you have something to contribute? Please tell us about it!
You can find Atari Gamer on...
Be sure to follow for the latest Atari Lynx news, updates, stories and photos!
[ Don't show again ][ Dismiss ]
Loading...
10
Close