If you're a fan of the Atari Lynx, you probably know of or have a copy of the Lynx SD cartridge. You've probably even downloaded the new Atari Gamer firmware for it. What we've been interested in a long time is the effect of faster SD cards on loading times for the ROM list as well as a typical ROM. Today, Atari Gamer ran some tests to find out, so read on for our results. 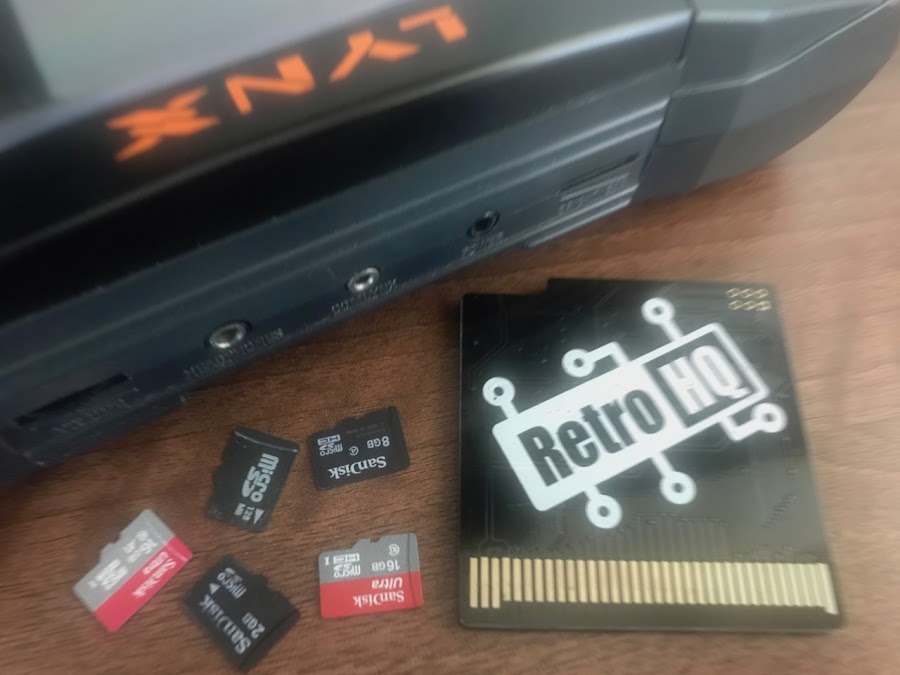 We tested 5 different SD cards. Ranging from a very old 128Mb microSD card to the more recent Type 10 A1 16Gb card. All of the tests were done using the new new Atari Gamer firmware with FAT as the file system on the SD card. Each of the measurements were taken several times to ensure consistency.

Lets look at some of the results. The first test was to see how quickly the ROM list loaded. Each of the SD cards was duplicated to have the same contents, there were about 20 ROMs and directories on the SD card.

As expected the older SD cards were slower, both taking over 6 seconds to for the ROM list to load. The newer cards were slightly faster but overall were relatively the same, slightly under 6 seconds. If you have a larger number of ROMs this time will, of course, go up. Atari Gamer recommends having less than 100 ROMs and directories, though of course you can have sub-directories with more ROMs.

Loading ROMs was where it got more interesting. The test ROM was Gates of Zendocon, which is a 256Kb ROM, quite typical of the usual Atari Lynx ROM size.

The old 128Mb SD card was the worst of them all, taking over 40 seconds to load the ROM. This time decreased to slightly over 20 seconds for older Class 4 SD cards, with both of the Class 10 cards taking the top performer spot at around 17 seconds.

So should you go out and get the fastest SD card out there to use with the Lynx SD? To an extent. It definitely helps to have a standard Class 10 card, but going beyond that will only have marginal improvements in loading times. These results weren't surprising but what they also show is that the Lynx SD appears to cap out at around 17Kb/s, so launching ROMs will not be instant no matter how fast the SD card is.

The good news is that there was an announcement about a new Lynx SD Lite cartridge coming to market soon. This cartridge will improve loading times and will also have a new slick look. Atari Gamer will of course be taking a closer look at this cartridge once it's available and we're planning to release benchmarking software to test how fast your Lynx SD performs.

-AG
Tags: Lynx SD, Performance, Review
♥ Did we get something wrong or you have something to contribute? Please tell us about it!
You can find Atari Gamer on...
Be sure to follow for the latest Atari Lynx news, updates, stories and photos!
[ Don't show again ][ Dismiss ]
Loading...
10
Close