As everyone knows, 2009 will FINALLY be the year of release of the future mega hit game from Super Fighter Team...called Zaku!

This game promises to deliver graphics and animation worthy of the best production of the time. Huge bosses, scroling parallax, charismatic characters, not to mention the stunning music. A true explosive hit!

This is a historical article. This content was originally written by rygar from the AtariAge forums on his website, which no longer exists. Atari Gamer is republishing this article with permission. A blast from the past, in time for the second release of Zaku! 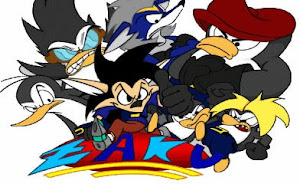 We all can create things. Artwork, music, writing, all come from our hearts and minds. It is those who dream that will be able to excel here. Those that fail to dream can only watch, and perhaps listen, waiting for a dream of their own. But be wary of those who are ignorant to the nature of dreams. They will see yours, and stop at nothing until it is taken from you.

It is the year 1987. A new program RARITY 9 is in development promising boosted mathematical performance on the "65C02" CPU. A beta was showcased with results rivaling current supercomputers. Who thought such power would be in completely elementary hardware?

"Indeed, who did think there would be such power," thought the maniacal Captain Bran.
"With this sort of mathematical terror, I can develop licensed games at tenfold the speed of our current automated system. By the end of this month, the world will be completely overrun with the glory of BRAN SYSTEMS software quality! People have seen market flooding before, but never like this. There will be no choice but to submit to my absolute domination to clean up this cardboardy mess. Out of the boxes will be born a new era of pain, suffering, and cardboard! No one can stop me now; I shall rule the world with RARITY 9! Penguin Bros, Get me that beta NOW!" 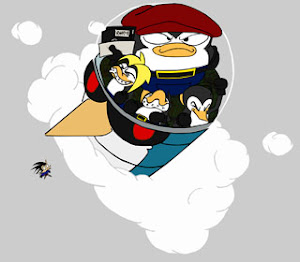 It was only a matter of time before the beta disappeared and a deluge of BRAN SYSTEMS licensed titles started flooding into stores, literally. If Bran isn't stopped soon, the entire atmosphere will be clogged with extra copies of Bran's games and there will be no option but to submit to his wishes. The world seems doomed to rot in a pit of unsold software, but Bran forgot about one thing… Zaku.

"That beta was mine, Bran, and I'll get it back no matter what the cost. You didn't even pay the licensing fee, and this definitely violates the EULA! I thought I had some stupid reasons to save the world before, but this takes the cake!" she stated determinedly.
"Hohoho, you think I'll just give the beta to you? It's a RARITY 9; the pure scarcity alone will repel you with its massive aura of fan message boards and false 'Wikipedia' articles. Come and get it if you dare!" taunted Bran.

Will Zaku be able to recover the beta? It's all up to you now as you guide her through through five beautiful worlds, complete with multiple layers of parallax scrolling and hordes of huge bosses. All at a rock solid 60 Frames per Second so you won't miss one drop of the action. The Penguin Bros, Bran's SNNVN (Smelly, Nasty, and Not Very Nice) dedicated attack force, will be waiting for you at the end of each mission, ready to take you down. Let's not forget about Iremsha, she'll be following you more directly. Bran or no Bran, she still wants to stop you in your tracks. But those aren't the only ones blocking your path, you'll meet up with some of the most bizarre and demented creations in the world of side scrolling shooters including the infamous Business Fish and T-T-Troast. Even after you've defeated the entire lot, you've still got Bran himself. Getting back that beta won't be easy...

Are you up to it?

Zaku
Our heroine and rumored creator of Rarity 9. Zaku vows to get the Beta back because Bran's games are horrible and she wants to do something else. Wears rocket shoes because they're absurd and power gloves because they're awesome.

The Penguin Bros
Dip, Bip, Flip and Emp are the leaders of the SNNVN attack force. Bran has given them each a backup copy of Rarity 9 for questionably safe keeping. Dip enjoys things with wheels, Bip enjoys smashing things, Flip enjoys things that turn into other things, and Emp enjoys bombs.

Captain Bran
President of BRAN SYSTEMS, generally nasty penguin, and current possessor of Rarity 9. Bran hates the world and vows to drive it to certain peril in the most ridiculous way possible. Doesn't like Zaku because she doesn't wear mascara. Enjoys thinking about taking things that aren't his and launching sandwiches into deep space. Got stuck in a bathtub once.

Iremsha D. Kanesco
Zaku's mentor once upon a time and skilled punch-things-in-the-head style fighter. Not much is known about her except that she's working with Bran for some odd reason. Likes to stand or float in dramatic-esque poses. Can snort an entire "pixie-stix" without flinching.Abilities

Taking down Bran's army and getting back Rarity 9 will require more than just fists and a quick wit, getting an edge is a necessity. Luckily, Zaku has plenty of tricks up her sleeve. Take control with your Lynx and unleash these powerful abilities! But watch out, the Penguin Bros. may be more prepared than you think.

Take Flight!
Control Zaku's airborne trajectory with the use of the Lynx's Eight-Way Directional Pad. Flight has never been so easy!

Rapid Shot
Hold down the Lynx's "B" button and Zaku will fire a steady stream of energy blasts from her power gloves. Sometimes speed and quantity is the key in battle.

Super Shot
Rapid shots may be good for taking care of many small enemies, but what about larger ones? Hold down the Lynx's "A" button to charge a more powerful shot that can penetrate through multiple enemies and heavily damage bosses!

Clapping Shield
Instead of tossing out all the energy you've charged up in a single Super Shot, why not charge a bit more and release the Clapping Shield? By mustering as much energy as possible, Zaku can create a powerful barrier which critically damages enemies on contact. However, this power comes with a price. The Penguin Bros. have come prepared for the attack, and have outfitted all bosses with protection against the Clapping Shield. It can also misfire at times, requiring a second charge cycle. Use with caution!

Back Blaster
Surprise enemies that try to ambush you from behind with a powerful burst of flame from your T-Thruster Boots! The Lynx's "Option 1" button is the key!

Power Orbs
Battle can be very hazardous to your health! Luckily we can "heal-on-the-go" with the Power Orbs dropped by enemies. Simply pick up eight or more orbs and your health Icon will notify you that it is possible to heal. Press "Option 2" to get a bit of extra health!Screenshots

Zaku is being produced by Super Fighter Team with a currently unscheduled release (although we are assuming prior to "Duke Nukem Forever"). Additional information will be listed once development closes.

If you're excited about Zaku and want to see what it's like, there is a very early demo version available to play. You can also try your skill at the Zaku Puzzle to whet your appetite!

2018 Update - If you want Super Fighter Team to put Zaku back into production, take a few moments of your time and contact them expressing your interest. If there are enough people who want the third release of Zaku, it will happen!

Now that the 2018 re-release of Zaku has landed, head on over to read the unboxing article.

-AG
Tags: Archive, Game Preview
♥ Did we get something wrong or you have something to contribute? Please tell us about it!
You can find Atari Gamer on...
Be sure to follow for the latest Atari Lynx news, updates, stories and photos!
[ Don't show again ][ Dismiss ]
Loading...
10
Close