Living in a small apartment in the city centre has its advantages like being close to pretty much everything, but it comes at the cost of little space for your games collection. I decided to try and do something about this and figured that a shelf could be added in the office room to hold games, console boxes and other gaming items I wanted on display.

I had a fairly large empty space directly in front of the roller blinds that was simply begging to have a shelf put into it. I wanted to place this shelf where the red line was drawn in the photo below. Simple enough! 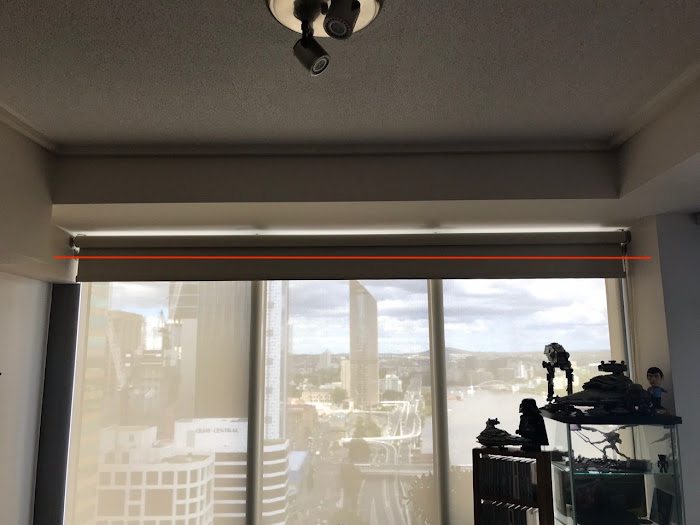 So off we went to Bunnings (an Australian hardware store) to get lengths of melamine cut to size, or close to because we had to adjust each piece to suite the uneven walls. The whole shelf was going to be built out of melamine with glue and screws holding it together. After the shelf was built on the ground, it was going to be lifted and screwed in place. 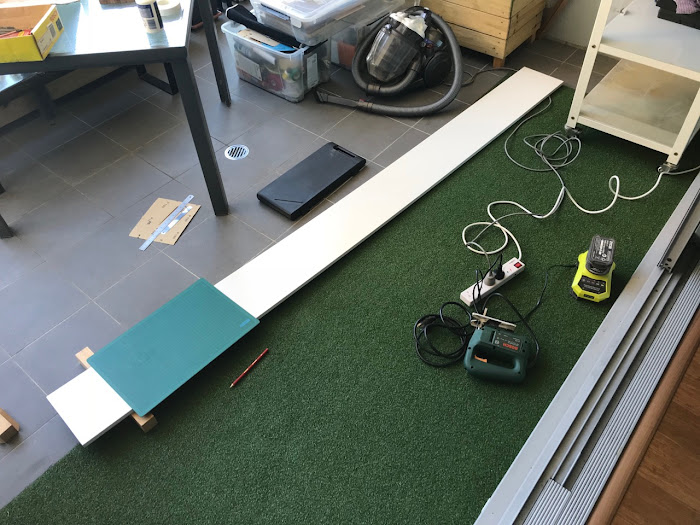 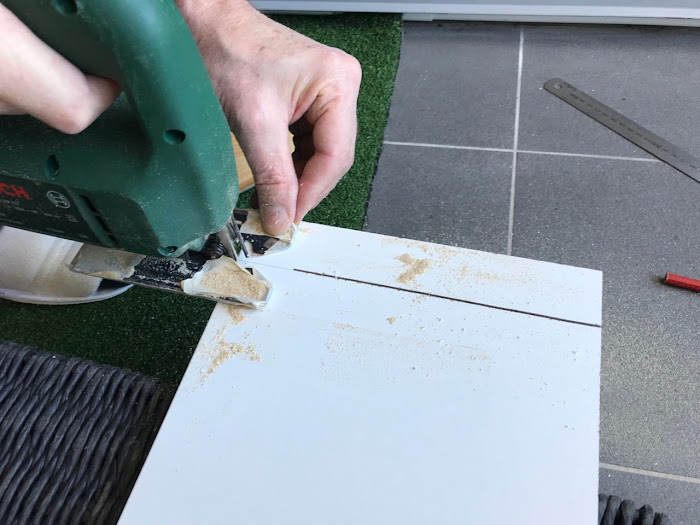 The design of the shelf was fairly straight-forward. The bottom section was going to have the rear and sides resting on top of it with screws and glue holding those in place. We had to remove a layer of melamine where the glue was going to expose the chipboard underneath. This design should ensure that the bottom section doesn't sag over time due to weight since it's held evenly along its entire length by the rear section. The rear section should not sag because it's mounted vertically. 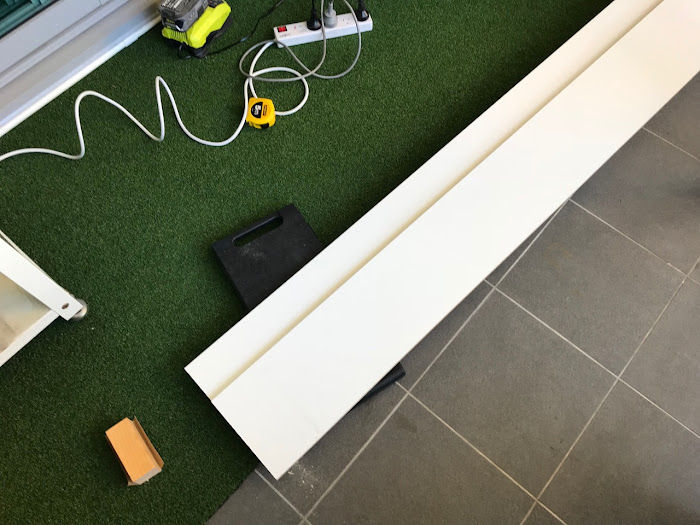 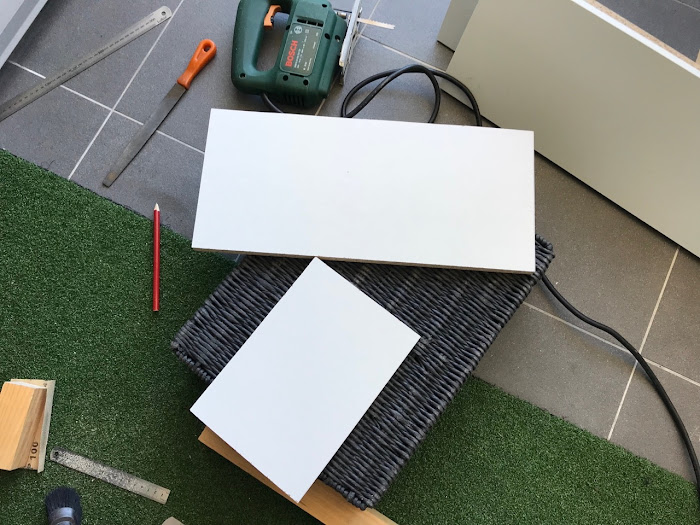 Because of the odd cavity space that we were trying to fill in, we ended up adding an L-shape shoulder to the shelf in the last minute. Originally I was going to fill this space and make it look like a part of the wall but this way it meant that I'd have even more room for my games! Because the melamine was already cut to size we added this with pegs and cut the side piece longer compared to the opposite side of the shelf. 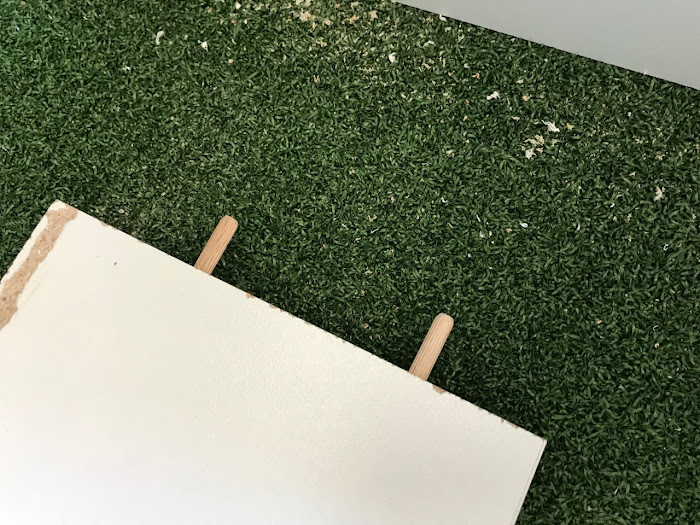 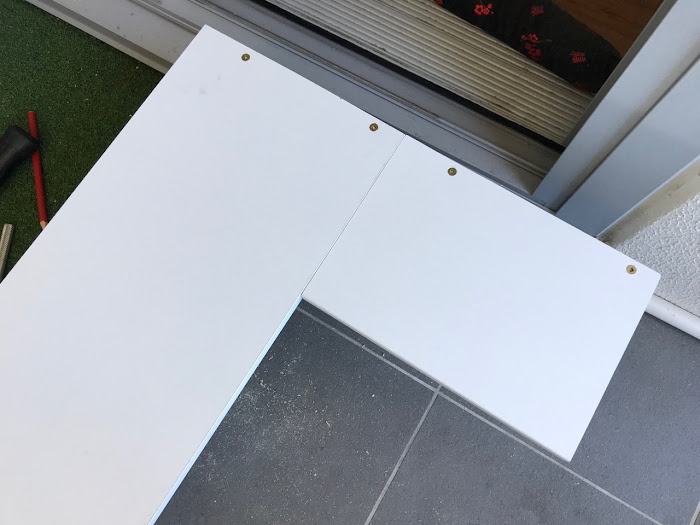 We had an assembled shelf! It was going to be mounted my securing both of the sides to the wall. The wall had anchors put in place and the sides had holes drilled in corresponding spots (actually we did the reverse, drilled holes through the sides and put anchors where the holes ended up on the wall). There was nothing supporting this shelf in the middle, which was fine for the amount of load it would carry. I may add something in the future to the back of the shelf to secure it to the concrete bulkhead above if I ever decide to put anything heavy on it. 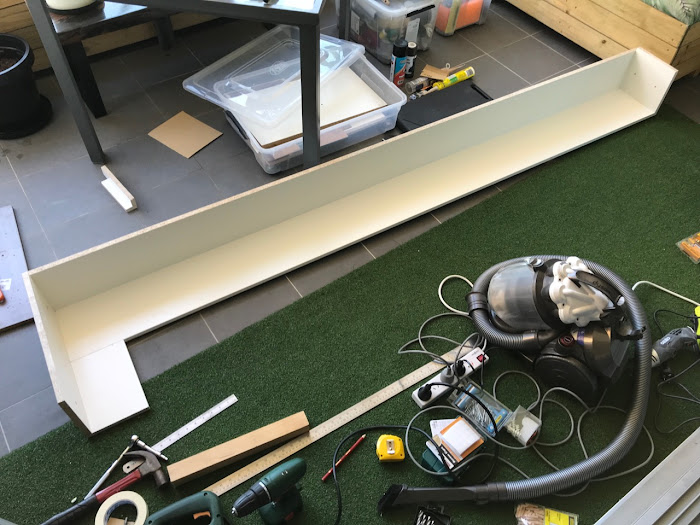 It was time to mount it! The gap between the shelf and the ceiling on the back was intentional. We left it like this in case there was any slight sagging over time, with a larger gap it would not be visible. Plus, it adds a nice effect when light coming in through the windows illuminates the ceiling. There was a fair amount of gap filler used to cover all of the uneven parts where the walls were crooked but in the end it looked seamless. I also used round screw hole covers to hide all of the screws. 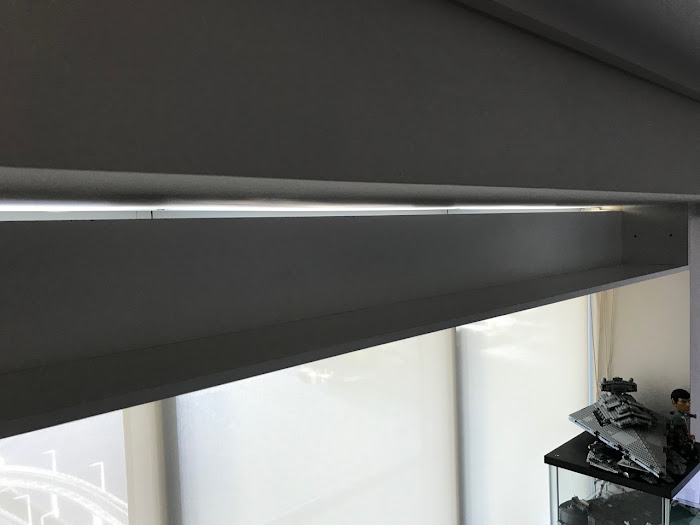 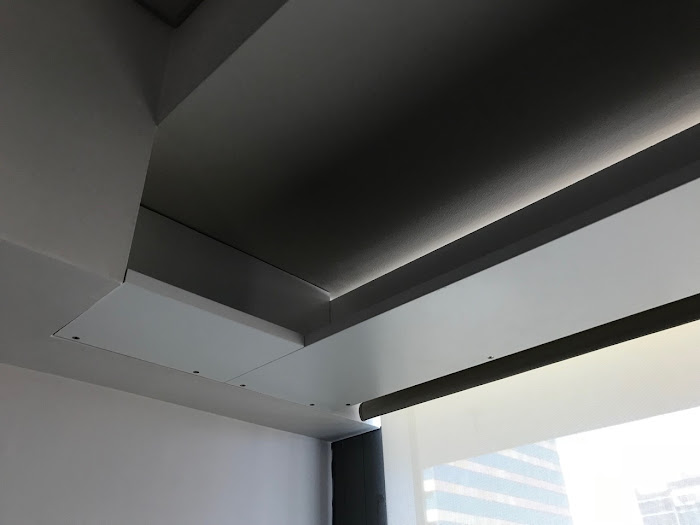 Of course the best part was putting up my collection on display! 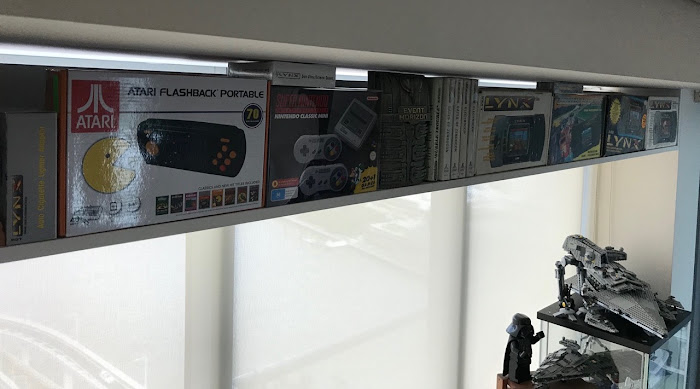 This mini project turned out really well and the shelf looks very nice in the office room now. As an added bonus it hides those roller blinds too! What previously was wasted space now holds a part of my Atari Lynx collection, which otherwise was strewn around the room. This worked out so well that we're going to extend the same idea to other rooms in the apartment next.

How do you store and display your collection?

If you want to see another example of a shelving system specific to Atari Lynx, check out this article - Wall Shelf Challenge - Making a Display Case for Atari Lynx Games.

-AG
Tags: Collectibles, DIY, Renovation, Storage
♥ Did we get something wrong or you have something to contribute? Please tell us about it!
You can find Atari Gamer on...
Be sure to follow for the latest Atari Lynx news, updates, stories and photos!
[ Don't show again ][ Dismiss ]
Loading...
10
Close