We have recently concluded the LynXmas 2020 Game Jam in collaboration with AtariAge, ejagfest and Sillyventure and as a result we have 7 new games for Atari Lynx for you this Holiday Season!

The game jam ran for a period of 15 days and there were only a handful of rules - mostly that the developers had to create a single-screen type of game and it had to fit within 32KB of space. Of course the theme was Holiday/festive season. As long as no copyrights were violated, developers were free to do anything within those minor confines. The end result was a very nice selection of genres, play styles, graphics and music.

Each of the 7 games brings a unique and fun view of Christmas, Santa and snow to make for a fun collection of mini-games. These are all planned to be released on a physical cart in 2021, but more on that later. For now lets get to the games (in alphabetical order!)

Gift Catcher brings you the fun (and frustration) of claw machine action to your Lynx. Instead of a claw however, you control Santa, on a rope, trying to catch gifts. Sounds easy at first, but you have to avoid those pesky snow flakes and get down to the gift and back up in time! It's fun and addictive, and you won't be losing credits each time you miss a gift like you would on a real claw machine!

Coded by Dr. Ludos who has brought out other games of a similar genre including Fishing for Atari and Growing Ties.

Ever wanted to fight Santa? With Naughty you can! Watch out though, Santa has some serious moves and defeating him will not be easy! Throw your snowballs for great justice! This is a fun and light hearted fighting game, which has a lot of potential for developing a serious future fighter!

Coded by Karri Kaksonen who made 512Kb home-brew flash carts a reality on Atari Lynx as well as making great games like SillySis and Shaken, not stirred.

A Christmas themed dungeon crawler? Yes please! RED brings the thrills and action of this genre of games to the Lynx! You play an Elf called Red who is on a quest to stop Evil Santa from cancelling Christmas. Navigate each of the 24 rooms to save Christmas, but be aware of the many traps that await you, or the floor will be coloured red with Red's blood!

Coded by KrakenDev who has recently released a demo of an upcoming game for Atari Lynx - Odynexus: Journey to Ithaca (Demo). He is also working on BomberCats, which we will hopefully see completed soon.

A classic assembly-puzzle game, Santa Factory puts you into the shoes of the elves that work at Santa's Factory, a legendary workshop in the North Pole. You have to assemble a number of presents to fulfil wishes. Each order gets more and more challenging. Can you do it in time or will you ruin Christmas? In arcade mode the stakes are even higher and you can't make a single mistake during gift assembly!

Coded by Nop90 who has ported games like Xump - The Final Run and Biniax to Atari Lynx.

An angry squirrel has emptied Santa's sack of presents and is now running around rabid. In Santa's Empty Sack you take control of Santa to try and get back as many presents as you can. Watch out for squirrel poo - stepping into it will slow you down until you have walked it off, and be careful of the squirrel when he is in frenzy mode, he goes berserk!

Coded by Igor Kromin (aka Atari Gamer) who has brought LynXmas 2020 game jam to you, as well as a number of other Atari Lynx programming competitions.

Saving Santa Tree is a mini platformer which has a feel of Super Mario Bros. 3/Battle Game. Leprechauns have stolen ornaments from the Christmas Tree and you as Santa have to get them back! Pick up and throw presents to knock your enemies out and find the lost ornaments. Watch out for ice platforms and flying enemies!

Coded by Fadest who has created many a game for Atari Lynx, including A Bug's Lynx, which is getting a physical cart release soon as A Bug's Trip REDUX from Songbird Productions.

Who doesn't like a good snowball fight?! In Snowball that's exactly what you get! You take control of the person at the bottom of the screen to throw snowballs at the person who peeks in from the top of the screen. Watch out for enemy snowballs as you only have 5 'lives'. Score the most points before your lives run out!

Coded by Aaron Hitchcock, a first-time Atari Lynx game developer. It's great to see more people getting involved in the Lynx homebrew scene, if you want to start making your own games, head on over to the Atari Lynx Programming Resources we've put together here. 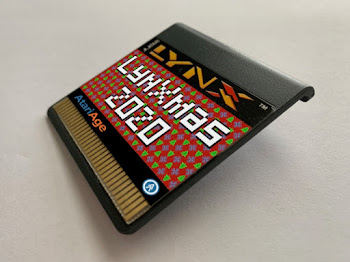 In 2021 all of these mini-games will be compiled and released on a physical cart. AtariAge has agreed to produce and publish this cartridge. It will come in a professionally printed Atari Lynx standard sized box and will include a manual with details of every game. Keep an eye out for that announcement soon!

Going forward Atari Gamer will try and have all of the competition entries released on physical cartridges for everyone to enjoy. We will also be hosting more themed game jams. If you have a suggestion on a theme, feel free to contact us!

-AG
Tags: Game Release, Homebrew, New Game, Programming Competition
♥ Did we get something wrong or you have something to contribute? Please tell us about it!
You can find Atari Gamer on...
Be sure to follow for the latest Atari Lynx news, updates, stories and photos!
[ Don't show again ][ Dismiss ]
Loading...
10
Close