Lynx Vision was a proposed modification to the Atari Lynx created by Wizztronics that would bring your favourite Lynx games to a television screen. The project started in 1998 and had a proposed release date in the 2nd Quarter of 2003. There were going to be two versions, an external unit and an internal unit that would fit inside an Atari Lynx II. Unfortunately it didn't eventuate and is now committed to the history books.

In many ways this project has been superseded by the McWill LCD Mod, so if you're looking to connect your Lynx to a TV (or rather a VGA monitor) that is the way to do it.

This is a republished (and slightly cleaned up) copy of the archived page for this now defunct project.

The Prototypes are done, and have been shown at the WORLD OF ATARI 98 Show in Las Vegas.

7/6/99 - Most problems encountered on the development of the table top version have been corrected as of July, we are expecting to have new prototypes later this month.

4/1/99 - 2 New prototypes have been delivered on a stand alone unit, they are currently under test, we will post both pictures as well as a delivery schedule as soon as possible.

1/15/99 - We have been considering a tabletop version of Lynx Vision since the WOA98 show and begun development shortly after the show.
We have received several prototypes and are fine tuning their design. Keep posted for new details as they become available.

The installation is now being finalized, currently requires removal of the rear cover and soldering in place a small Printed Circuit Board over a group of 26 pins. Estimated installation time is 20 Minutes.

Full aspect ratio has been maintained.

We will be offering Installation in your existing LYNX Game, or purchase of a complete pre-modified game console.

Over the coming weeks we will announce the full features of this device as well as it being a fully internal unit or a combination of internal and external, TBD (to be determined).

Full internal installation will cause a slightly higher drain when using batteries.

Outputs: 1 output for Video RCA and 1 for Stereo audio.(mini jack for audio). A template will be provided to assist you in drilling the necessary holes to accommodate the Video RCA jack.

* Flip function to be added in released version. 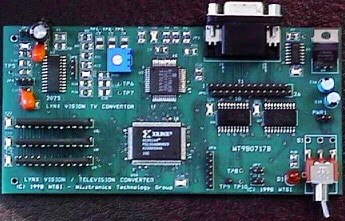 External, there are no ill effects, your Lynx will maintain it's full functionality as it did before, with the exception of the added TV output capabilities. There will still be a soldered PC board needed internally (you must install) and a DB15 cable that will connect your Lynx to the external box (the TV control unit). From this control unit you will have both Audio and Video cables attached to you TV/VCR or auxiliary inputs of your entertainment center. 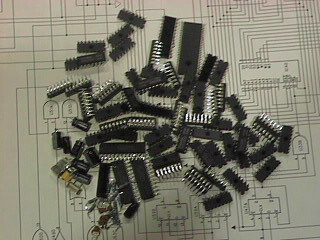 The image to the right is what we started with, over 100 discrete Integrated circuits. What we will have will be less than 10 when the converter is completed.

With over 650 engineering hours already spent we are closing in on the completion of this new project, all in the attempt to make game playing more enjoyable.

External Design shown at WOA98. This model requires an adapter soldered into the Lynx game unit.

Internal Design requires soldering (fits inside Lynx Hand Held game).
Tags: Hardware, Information, Lynx Vision
♥ Did we get something wrong or you have something to contribute? Please tell us about it!
Did you like what you just read? Please take a moment to see how you can support Atari Gamer. With your help we can keep this retro gaming website going and develop new content! Or just check out what else we have for you...
You can find Atari Gamer on...
Be sure to follow for the latest Atari Lynx news, updates, stories and photos!
[ Don't show again ][ Dismiss ]
Loading...
10
Close