This is an introduction to soldering and assembly instructions for our Bunny LED flasher kit available from our shop. 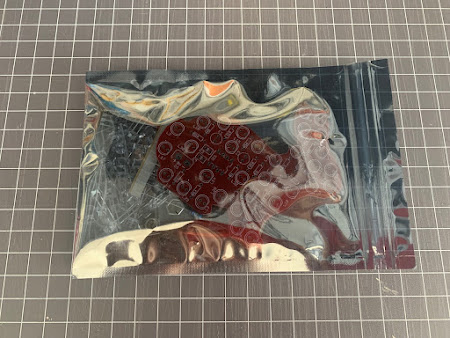 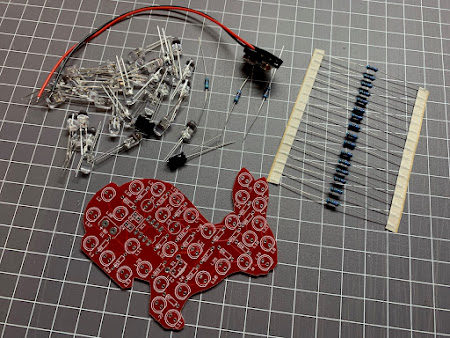 Soldering is much about the technique, and this kit contains many easy to solder components to help you practice and hone your skills. You will need the standard 60/40 solder for this and a soldering iron, preferably with a fine tip. Your iron should be set to 320C temperature and you need to wait for it to warm up. Depending on your iron, it can take as little as 12 seconds to warm up or it can take several minutes. If you don't know how fast your iron warms up, you can try melting a little bit of solder on the tip, if it melts easily, you're good to go.

When soldering a component, you typically would do it from the bottom side of the PCB, this is where the "legs" of the component poke out. Start by holding the tip of the iron on the component leg to heat it up. Then bring the solder towards the heated up leg and let it melt. This should only take a couple of seconds in total. Don't heat the component legs for too long as that may damage it. If you're having trouble getting solder to melt, try doing it from a slightly different angle.

Most of the components you will solder will need to be positioned in the correct orientation. The orientation typically has some sort of a marking on the PCB - this can be a + sign, a straight edge, a notch, etc. These will be covered in the steps below.

After soldering a component in, you should use side cutters and snip off the excess part of the leg that is protruding beyond the solder joint. 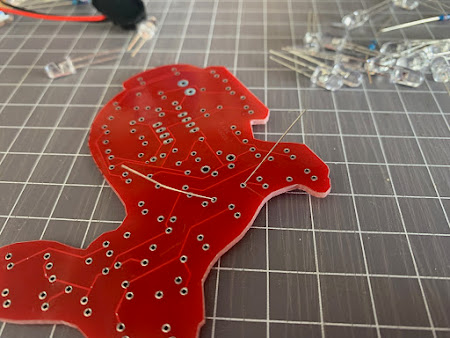 Every PCB has a schematic diagram to show how components are connected. This diagram can assist in showing you the correct orientation of components and also in what values the components need to have for the locations shown. For example in the schematic for the Bunny (below), R1 is a 100k Ohm resistor and R3 is a 270 Ohm resistor. Some PCBs will have values marked, but many won't. The Bunny PCB does not have component values marked, only their names, so you need to reference the schematic and find the value of the component before you solder it in.

The following component names are used on the Bunny PCB -

Soldering in the Resistors🕸

Resistors are the easiest components to solder in because they only have two legs, and their orientation doesn't matter. You can solder them back-to-front and they will still work all the same. So start with soldering those. Follow the colour codes in the component list above. It's probably best to solder the three resistors that are not on the tape together first so they are out of the way as they all have different values. Then, you can solder the sixteen identical resistors. You will need to bend the legs on the resistors down so they are at 90 degrees to the resistor body, then push them through the PCB wherever the resistor symbol is printed i.e. R1, R2, R16, etc. The resistor should line up with the symbol on the PCB. 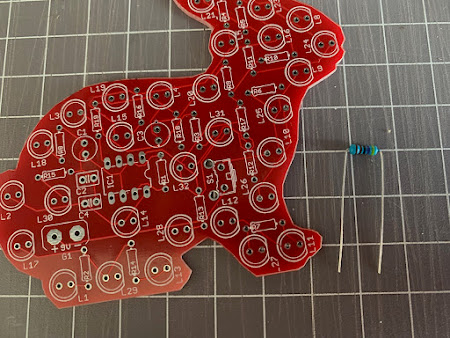 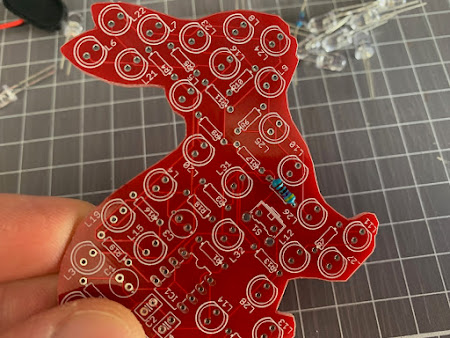 As an extra challenge, the later versions of this kit have been shipped with resistors that are a little too large for their places on the PCB. If your kit has one of these, you just need to fold one of the legs of the resistor under itself, and then push it through the PCB. Just make sure that the resistor does not overlap any other components or their symbols. Note: there should only be a maximum of three of the larger sized resistors. 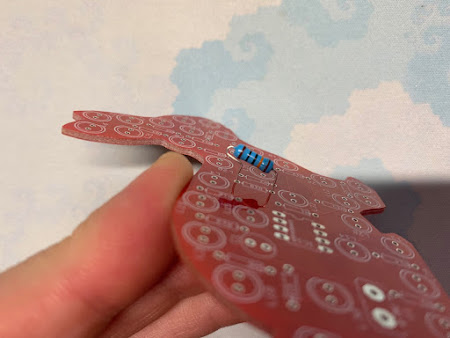 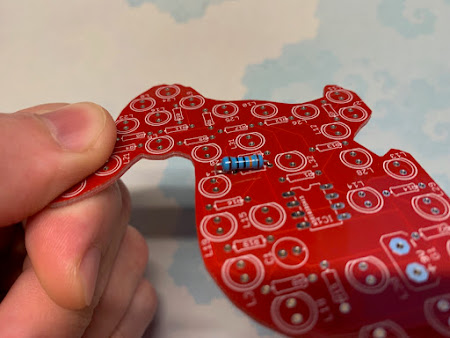 Soldering in the LEDs🕸

LEDs have to be soldered in the correct way around, unlike resistors. LEDs have a positive (anode) and a negative (cathode) side. The cathode (negative) side is indicated by a "flat" spot on the base of the LED plastic, it also has the shorter leg. The marking on the PCB will have a side with a flat edge where there cathode goes, the other end of the LED marking will have a normal rounded marking.

You can use the same approach to soldering in LEDs as resistors, but it's probably easier to just hold them in place while you lightly solder one leg in (just enough to hold the LED in place), then solder the other leg properly. You can then come back to soldering in the first leg properly. 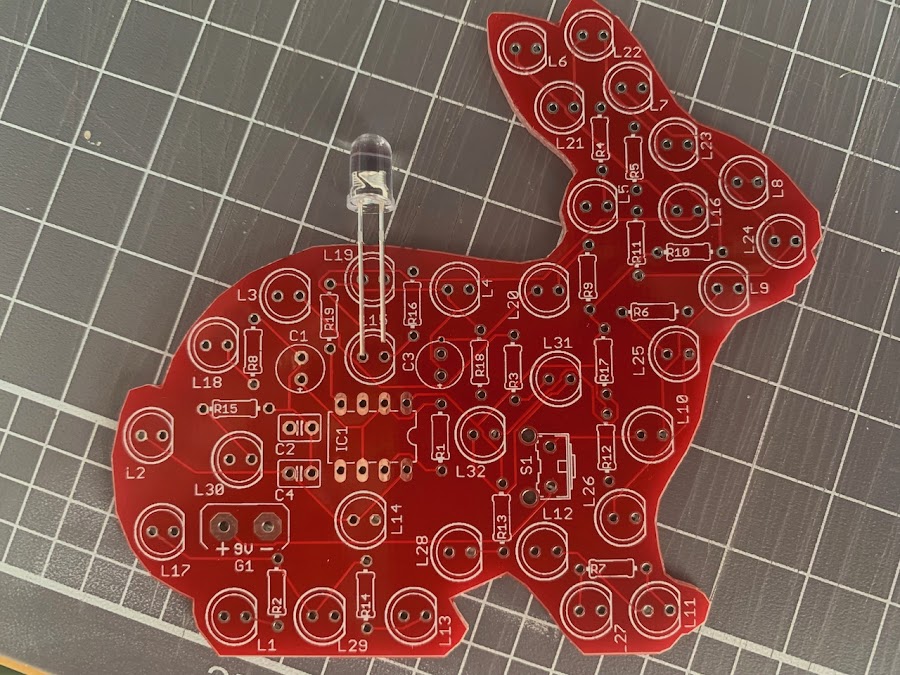 Soldering in the Capacitor🕸

Just like LEDs, capacitors need to be oriented correctly and also have a positive and negative sides. The negative side is marked by a stripe and the positive side is typically unmarked. The PCB will have a + mark either inside or outside the capacitor symbol, so make sure to look for it. The Bunny PCB has the + mark inside the capacitor symbol. Sometimes, like on the Atari Lynx motherboard, the + sign is to the side of the capacitor but there is an arrow to show which leg the + sign belongs to.

Capacitors are soldered in the same manner as LEDs. 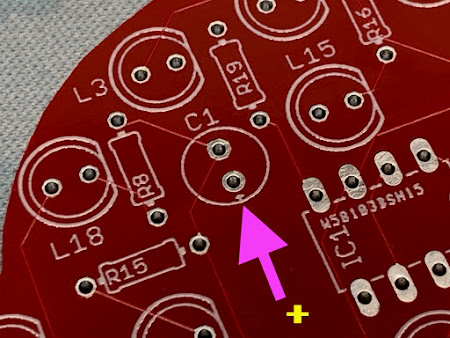 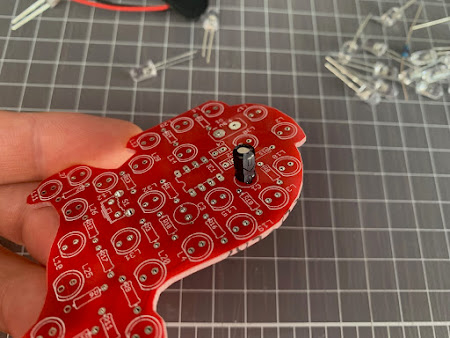 Soldering in the IC🕸

The 555 timer IC is used to control the timing of the LEDs switching on and off. It's an integrated circuit, or chip, as some would call it. This makes it sensitive to static electricity, so be sure to touch something metal and touching the ground to discharge any static on your hands. If you handle the IC without doing this first, it may get burned out.

ICs need to be oriented correctly. For the 555, there is a notch on both the IC and its symbol on the PCB, just line these up and solder it in. Some ICs will not have a notch, but a dot, the dot and the notch line up together. 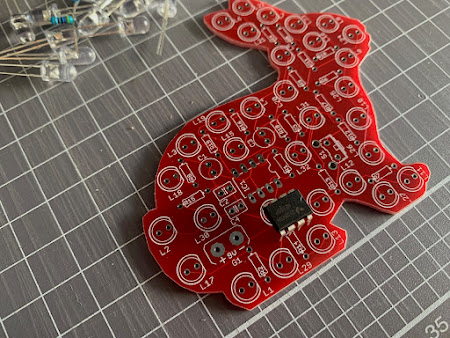 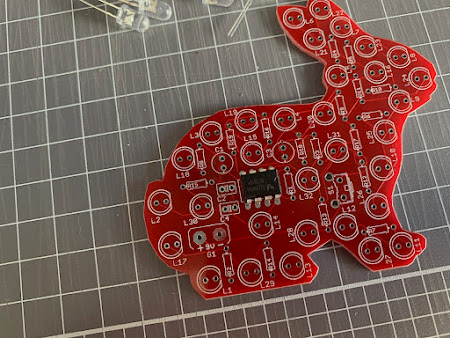 Soldering in the Bridges🕸

If the revision of the PCB you received has a S1 marking (for a switch), it needs to be bridged (or shorted). For this, use one of the cut off legs from a resistor or LED, bend it into the correct size as per the PCB marking, and solder it in like a resistor. This simply closes the circuit so you don't need to have a switch in place. 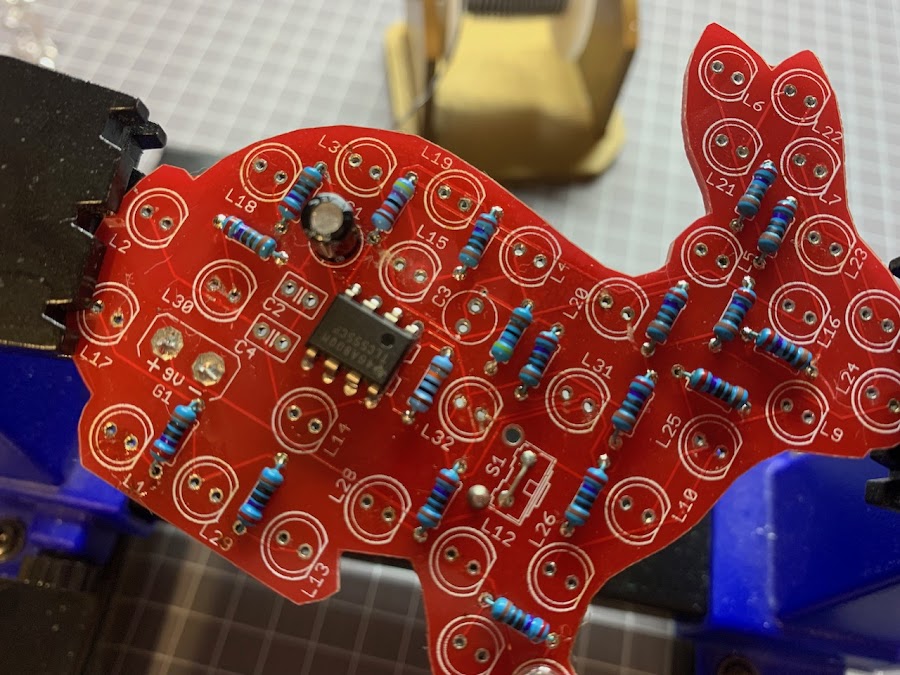 Soldering in the 9V Battery Connector🕸

The battery connector has two wires and these should be soldered into the PCB from the back to the front i.e. you will solder them on the front side of the PCB, unlike the other components. These connectors are pre-tinned, so you don't need to melt any solder on the ends of the wires before soldering them in. Push the wires though from the back to the front of the PCB and while holding each wire in place, solder it in.

To test the Bunny PCB, connect a 9V battery to the battery adapter. The LEDs should light up and start alternating. Note: some easier revisions of this PCB will not have the following components spots filled: C2, C3, C4. 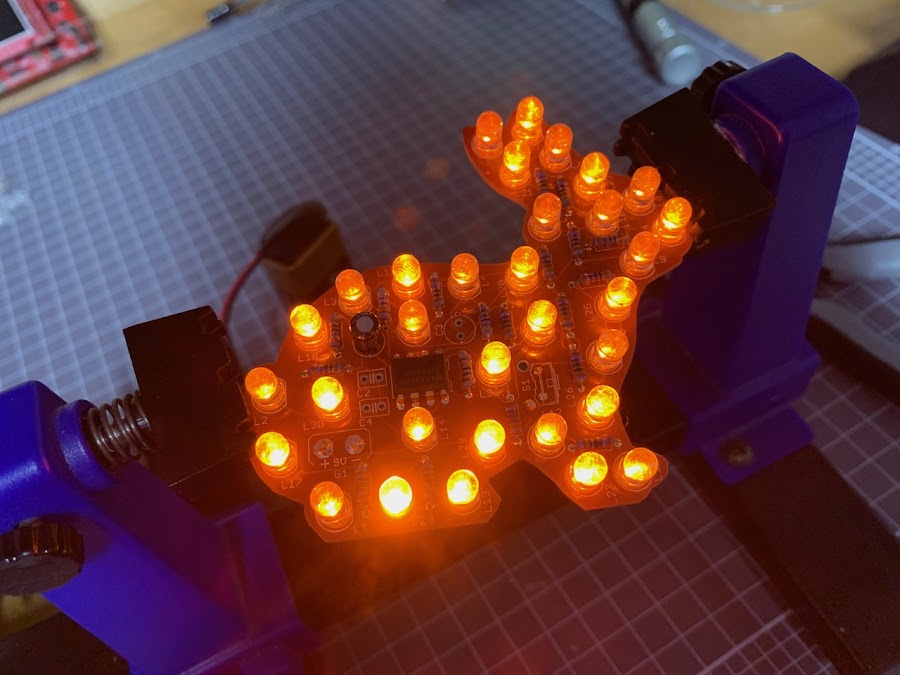 Tags: Bunny, Easter, Electronics, Hoot
♥ Did we get something wrong or you have something to contribute? Please tell us about it!
You can find Atari Gamer on...
Be sure to follow for the latest Atari Lynx news, updates, stories and photos!
[ Don't show again ][ Dismiss ]
Loading...
10
Close