There are times when game developers go above and beyond to please the people who write to them about completing their games. In 1992 such a thing happened for one lucky gamer when Epyx, and specifically, Peter Engelbrite, who was the developer for Todd's Adventure in Slime World wrote this amazing letter back... 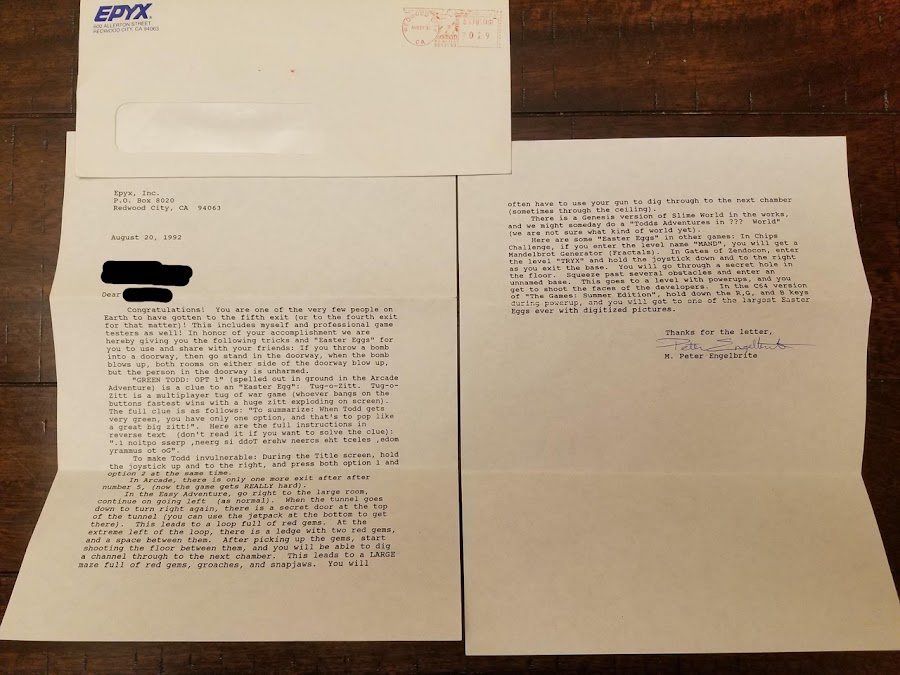 Here's the transcribed text of the letter...

Congratulations! You are one of the very few people on Earth to have gotten to the fifth exit (or to the fourth exit for that matter)! This includes myself and professional game testers as well! In honor of your accomplishment we are hereby giving you the following tricks and "Easter Eggs" for you to use and share with your friends: If you throw a bomb into a doorway, then go stand in the doorway, when the bomb blows up, both rooms on either side of the doorway blow up, but the person in the doorway is unharmed.

"GREEN TODD: OPT 1" (spelled out in ground in the Arcade Adventure) is a clue to an "Easter Egg": Tug-o-Zitt. Tug-o-Zitt is a multiplayer tug of war game (whoever bangs on the buttons fasters wins with a huge zitt exploding on screen). The full clue is as follows: "To summarize: When Todd gets very green, you have only one option, and that's to pop like a great big zitt!". Here are the full instructions in reverse text (don't read it if you want to solve the clue): ".1 noitpo sserp ,neerg si ddoT erehw neercs eht tceles ,edom yrammus ot oG".

To make Todd invulnerable: During the Title screen, hold the joystick up and to the right, and press both option 1 and option 2 at the same time.

In Arcade, there is only one more exit after after number 5, (now the game gets REALLY hard).

In the Easy Adventure, go right to the large room, continue on going left (as normal). When the tunnel goes down to turn right again, there is a secret door at the top of the tunnel (you can use the jetpack at the bottom to get there). This leads to a loop full of red gems. At the extreme left of the loop, there is a ledge with two red gems, and a space between them. After picking up the gems, start shooting the floor between them, and you will be able to dig a channel through to the next chamber. This leads to a LARGE maze full of red gems, groaches, and snapjaws. You will often hav eto use your gun to dig through to the next chamber (sometimes through the ceiling).

There is a Genesis version of Slime WOrld in the works, and we might someday do a "Todds Adventures in ??? World" (we are not sure what kind of world yet).

Here are some "Easter Eggs" in other games: In Chips Challenge, if you enter the level name "MAND", you will get a Mandelbrot Generator (Fractals). In Gates of Zendocon, enter the level "TRYX" and hold the joystick down and to the right as you exit the base. You will go through a secret hold in the floor. Squeeze past several obstacles and enter and unnamed base. This goes to a level with powerups, and get to shoot the faces of the developers. In the C64 version of "The Games: Summer Edition", hold down the R, G and B keys during powerup, and you will get to one of the largest Easter Eggs ever with digitized pictures.

Thanks for the letter,
M. Peter Engelbrite

Tags: Letter, Slime World
♥ Did we get something wrong or you have something to contribute? Please tell us about it!
You can find Atari Gamer on...
Be sure to follow for the latest Atari Lynx news, updates, stories and photos!
[ Don't show again ][ Dismiss ]
Loading...
10
Close