Tetris bricks are falling, the only way to interact with them is to shoot one or more blocks while they drop. You can move on all the already dropped bricks. Of course, the main goal is to make lines, like in real Tetris. You lose if columns are too high, like in real Tetris...

If you have ever play a Tetris clone game, you know how to score : you gain points when a line is complete, the more lines made at the same time, the more points you get.

If you have ever play a shoot'em up game, you know the basis of the game play : just move and shoot. You can move on every brick of the board, you can shoot falling bricks. There are some bonuses that can be collected once down, some other that need to be shoot. There are also some malus, destroy them before they are down or deal with them :

Pause will display an help screen. 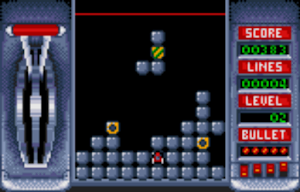 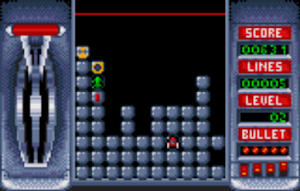 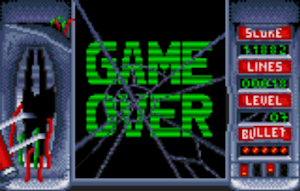