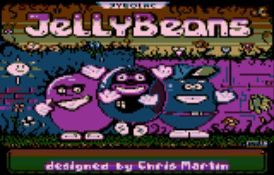 In JellyBeans you must remove JellyBeans from a "lockbox" before it fills up. The lockbox can hold a maximum of 75 JellyBeans in a 5x15 configuration. There are five different colored JellyBeans, which can be removed by matching 3, 4 or 5 JellyBeans in the center row of the box.

The lockbox will always contain a minimum of 25 JellyBeans. Removing 3 or more of these JellyBeans will cause the lockbox to regenerate the missing JellyBeans. This leaves room for 50 more JellyBeans, but watch out!!!

However, the lockbox will periodically generate 3 extra JellyBeans. The period of time between each succesive generation will be shorter than the last. This means that the Jellybean generations will become faster, and faster, so you must keep up!!! (Progressive difficultly).

Beans, Bricks and Bombs, oh my!

Ocassionly the lockbox will not only generate JellyBeans, but it will also generate bricks and bombs.

Bricks are bad! Bricks cause the columns containing them to "lock" or to not be able to move up or down until the bricks are removed. You can remove bricks by removing beans between them and the center row. When a brick enters the center row, it is magically changed into a jellybean. There can only be 3 bricks on screen at a time, thus only 3 columns can be "locked".

Controls:
Press OPTION1, OPTION2 or PAUSE to close the title-screen,
then press OPTION1 to start the game. 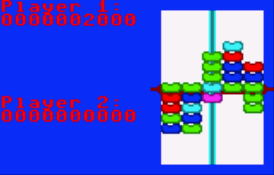 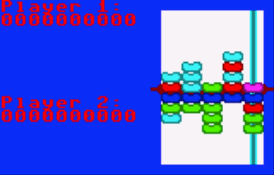 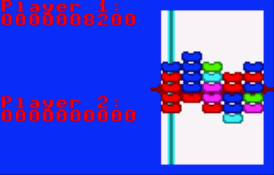 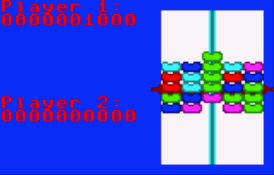 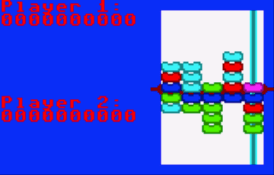