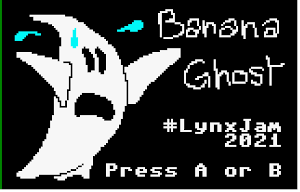 You're a banana-shaped ghost living in a dilapidated old house, help the lost visitor to escape from it and avoid multiple holes by scaring him!

Gameplay: When the visitor was scared, he run away in the opposite direction. Use that to make him find the gates and escape from the dark rooms. If he fall in a holes, the game was ended. Travel around 16 rooms to reach the end of the game.

Controls:
- press any button to pass title & end screens
- use directions to move banana ghost
- B to scare the visitor

Tech:
This project is made in C using cc65. The music was composed and played thank to chipper tool and player.
All code, graphis and -crappy- sounds by Bjorn.

👾
This entry is part of an event — LynxJam 2021 - Let's Make Something Scary.
Graphics
Rate me!
Sound Effects
Rate me!
Music
Rate me!
Controls
Rate me!
Replay Value
Rate me!
⭐ Rate this ROM🎮 Play ROM 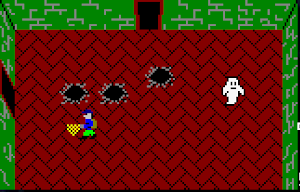 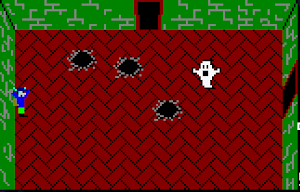