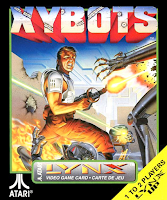 Okay, here’s a quiz: what game do you picture in your mind when I use these terms?

Did you think of PC games like ‘Doom’ or ‘Wolfenstein 3D’? Well, the game I’m describing is the Atari Lynx title ‘Xybots’, but I have to say, there were times during this game that reminded me so much of classic FPS gaming that I was completely shocked!

‘Xybots’ is an Atari Lynx arcade conversion, but it’s not as well known a title as other Lynx conversions (like ‘Ninja Gaiden’ or ‘A.P.B.’). It’s also a kind of “pre-FPS shooter”, putting you behind a space-hunter character with a big weapon. Your job? To destroy the xybots on each space station floor, pulverise the master xybot, and then claim victory... while your health bar slowly ticks down, in a multi-floored location. Easy as pie, right?

With the game ‘Xybots’, prepare to be thrown into an experience which looks and feels pretty unique. You are looking over the shoulder of your character, firing a laser pistol at foes, and running around winding corridors in a ‘stop-start’ way. The interface may feel a little jarring at first, but you’ll soon master it. Holding down the Option 2 button shows you the map, which will give you a heads-up about what is surrounding you on each stage. And it’s in great detail, so you at least have knowledge on your side in these fraught surroundings. But you won’t want to spend much time viewing the scenery; you’ve got a job to do, so start xybot hunting!

Graphically, the space station looks terrific. The walls and their patterns change a fair bit, though they do feel a little samey sometimes. Your sprite (and enemy sprites) are bright and well animated, and the gunfire, items and scenery highlights are all well represented. You can move your guy around with a lot of freedom, but you need to hold one button down (while hitting the d-pad) to pivot in a different walking direction. Again, just as before, this control method will take a little getting used to before it becomes fully comfortable. You’ll spend most of your time exploring and blasting, and unlike ‘Wolfenstein 3D’, you’ll actually see the explosive impact of your laser blasts on the wall you are facing - nice effect! As well as the ubiquitous monsters around the corners, keep an eye out for items or transportation devices!

Thankfully, you won’t spend the whole time just running and gunning; in fact, you don’t need to get rid of every xybot on every level. You just have to find the elevator on each floor. Every time you do this, there is a great little cutscene that plays as you then access the shop vending machine. This area is nicely drawn and definitely breaks up the intense action. There are plenty of weapons and enhancements to buy, so pay attention for coins throughout the game - you’ll be grateful for them later! Unlike other games, you really notice the effect of powerup items, such as money and health, and their presence soon becomes invaluable to progress.

Soundwise, I found ‘Xybots’ to be pretty strong, purely because of the ambience of the audio. Even though the music isn’t as good as some Lynx titles, the tracks are appropriately “sci-fi inspired” and really do thump along nicely. Effects, also, are terrifically done, with nice shot-firing audio on the laser pistol and some cool explosions. The cutscene music doesn’t quite fit with the rest of the audio palette, but the audio tracks collectively form a great backdrop to this arcade shooter. Strangely enough, these tracks would not have sounded out of place in ‘Doom’! They are claustrophobic, pulsing rhythms that only heighten the intensity of the combat, and put you on edge when you are sitting on 15% health with no life boosts in sight... yeeeikes!

I’ve made no secret in describing the controls as very different to other Lynx games, and something that will take a little while to adjust to. In some ways, this game feels like ‘Eye of the Beholder’ (Atari Lynx homebrew game) in that your view doesn’t flow or scale. It’s not at all like the first-person perspective of ‘Battlewheels’, where you can instantly walk or drive anywhere. But you do get used to how the game is designed, and you’ll have no problem shooting, strafing, running forward, running backwards and using level keys (which can lead to optional warp zones). I would have loved a smooth scaling shooter, but hey, there really isn’t much to complain about regarding button or d-pad responsiveness; you can rely on the controls when you need them and they are on point!

Longevity is important for every game, and thankfully, there are a huge number of levels to get through in this game (being an arcade game conversion). It’s a shame the levels weren’t organised into five or so main episodes, to be completed one at a time (a la ‘Doom’). You only have one life in ‘Xybots’, and 40+ levels of survival will test anyone’s nerve. We are truly in ‘Roadblasters’ and ‘Rampage’ territory here. You’ll need a good 3 to 4 hours to complete ‘Xybots’ so plug that Lynx in and forget the batteries!

Thankfully, ‘Xybots’ really pulls you in, and you’ll find yourself coming back to it often. I thought I might get sick of retrying the game at the start each time, but no. ‘Xybots’ has the ability to draw you in again and again because of its little surprises; with exploration you’ll find level warps, walled barriers to use against gunfire, and keyholes (for keys) to take you to dangerous new zones. Add to that the ability to play differently every time and you have a winner of a game that rewards practice and considered approaches.

In conclusion I’d have to say that ‘Xybots’ is a great little shooter for the Lynx. There are lots of little touches in this game, from the hero blowing smoke from his pistol after fragging all robots on a floor, to those xybots who have their own laser blocking strategies. It’s a strategic blast ‘em up, which is great for those who like a bit of thinking with their blasterama. I enjoyed being mindful about resources, exploring where the items were, and using the map to my advantage. Though the level organisation could have been made more gamer-friendly, the fun is evident in this game and the action is rich. Count me in for this gladiatorial robot clean-up job; I’m ready to rumble. Who’s with me?