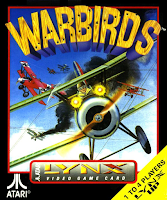 Ah, 'Warbirds' for the Atari Lynx. Along with 'Chip's Challenge', this is possibly one of the most well known Lynx titles in existence, and for very good reason. No one would have truly believed, at the time of its release, that ANYONE could have pulled off an early aircraft fighting game like this on a handheld. It just beggars belief that the game was even possible, let alone imagined in someone's mind.

As a purely technical achievement, 'Warbirds' is as much a Lynx benchmark as 'Stun Runner', 'Battlewheels', 'Blue Lightning' and 'Lemmings'. Just try replicating THIS title, Game Gear and Game Boy; yes, I’m looking at you both. Ostensibly, what we have here is an astoundingly presented early war-flight game, which puts you in the cockpit of a delicate aircraft kitted out with a machine gun. Basically, you have the goal of shooting down rival crafts, whilst around you surrounding are the beckoning skies, the never-ending clouds, and the hum of distant enemies in their flying machines. It's one of the most realistic 'war-like' games of all the militaristic titles on the Lynx (and there are more than a few of those).

We should address the visuals first, because they are clearly the most significant factor in this game. The plane itself is lovingly represented in a traditional way, right down to the old style whirring dials. You can watch the happenings outside the plane from a variety of angles, and everything out there looks pretty stunning. In fact, this game could easily have been a basic, passenger flight simulator, given how peaceful it is just to sail over the land and stare up at the clouds. But you can’t, because those enemy planes are out there! The foes look great, albeit a bit pixely when up close. Your own guns look pretty awesome whilst firing, and the whole experience is very smooth. The mixture of both sprites and polygon-based graphics means you don’t get the ruggedness in animation that you see in ‘Hard Drivin’. Rounding out the visuals are some very impressive digitised real life photographs, representing different reports you receive (wins or losses). It’s a nice touch which certainly heartens back to the era in which this game is based.

Sound-wise, you do get some nice intro and outro music, but there’s no soundtrack as such in-game. Which is probably to be expected, given it’s a war sim requiring a fair amount of concentration. You do get the lovely hum of your craft, and the curiously ‘laser-like’ quality of the enemy aircraft guns in the sky. I think the ‘Steel Talons’ ammo fire effect would have been a much better option for this game, to be honest; but there’s nothing too off-putting about it. There’s also a “zzzrrrrm!” sound when you shoot down a plane; sorry, I can’t explain it any better! Picture a high note gradually lowering in pitch, and you’ll get the idea. I hope. It’s very effective and the slightly tense and isolating silence that meets your ears while playing is somewhat appropriate; you don’t quite know sometimes where the enemy is coming from!

The controls are really one of the “heights” of the ‘Warbirds’ experience. Now that you are in your visually impressive cockpit, where do you want to go? Like ‘Steel Talons’, prepare for the freedom to fly your way. And that’s a very empowering thing. Whilst you have a mandatory task at hand on each of your missions, you can fly the skies as the consummate pilot you’ve always wanted to be; if you wanna fly upside down, then fly upside down! And watch the stunning green scenery and the clouded skies sail around you. Enemy jets are easily recognisable and almost always make you wince as they head straight for your plane; duck! You also have the choice of viewing what is going on from the angle of your side wing, much like the side-on view of ‘Battlewheels’, which is very nicely done. Truly, in capturing the experience of flying a ‘warbird’ biplane, nothing of note has been left out.

In terms of playability, it’s worth noting a few important factors. Firstly, whilst technically a marvel to behold, ‘Warbirds’ isn’t going to appeal to all players. It’s not really designed for megafast shooting fans or for “blast ‘em up” ‘Zarlor Mercenary’ players. Whilst you do need to shoot down the enemy biplanes in each mission, it’s more about using your supplies (like your ammo) and your strategy in a wise way, requiring both patience and tenacity. Admittedly, the game does suffer somewhat from a lack of mission variety; I would have liked a bit more ‘Blue Lightning’-style changeups in the stage objectives, particularly graphics-wise. But that said, there are many customisable game options here that most flight sims don’t have, from aerial collision choice to limited / unlimited ammo. And, there are times you may need to land to get more supplies for your craft; be careful of attack in those instances!

In all, ‘Warbirds’ gets an “A” grade for its graphical, aural and technical chops, as well as the way the game plays as a Red Baron style experience. It could have done with a little more variety in the objectives, as seen in other Lynx flight titles like ‘Blue Lightning’ and ‘Desert Strike’. But when all is added together, it’s an utterly unique game that grabbed hold of the collar of the portable gaming world way back when, and said: “Can your portable gaming system do THIS?” And no one had an answer. Why not chuck this cart on with your McWill-modded Lynx screen and see how this game was designed to be played; have fun sailing through the skies, corporal!