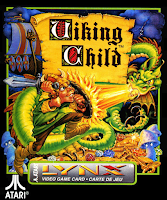 Have you ever liked a game and found that there are many people out there that DON’T like it? Makes you question your judgment sometimes, right? That is, unless you feel that you are correct. Occasionally, public views on a game can be so varied that it’s hard for many to make a choice to buy or not buy. To me, ‘Viking Child’ falls within this category. I can understand the criticisms; but I think it’s also been unfairly painted. I like it. And I think given proper time, you might like it too.

‘Viking Child’ is a platformer and, truthfully, the Lynx is spoiled for choice when it comes to platformers (‘Shadow of the Beast’, ‘Power Factor’ and ‘Switchblade 2’ just for starters). Perhaps this is why the game has been polarising for many; there are just too many comparisons to other platformers. But whilst ‘Viking Child’ may have its flaws, what we have here is a cute and charming little platform game with a few sore points that really don’t sink the game in the final appraisal.

You control Brian, a Viking Child, trying to rescue your family. The setting is the Middle Ages, so Brian comes equipped with a little dagger to defeat monsters. Later you’ll come across shops with swords, shields and other weapons to make your journey just a bit easier. The action is spread across multiple continents, and you’ll need all your platforming skills to get to the end of each stage and defeat the bosses. There is no horse to ride, so get ready those hide boots; it’s monster hunting time!

Visually, ‘Viking Child’ is a nice looking game, but it’s very much a product of its era. If you’ve played the original game on the Amiga, this is a really nice conversion; the locations look the same, the hidden coins and gems are in the same place, and the graphic palette is more-or-less equivalent. Your foes are mostly animals and forest creatures and, boy, are they cute. It’s hard to kill a cute turtle, unless it’s wielding a massive hammer (which the one in this game does). Bosses are much uglier, incidentally. They take a fair bit of time to defeat and hurt you much more than smaller foes, but thankfully you have lots of hearts (energy), access to special weapons, and the ability to buy extra lives. I gotta say, seeing YOURSELF on the shop shelf for purchase is a little disconcerting!

Sonically, you can see that game designers had to make some decisions. Though the sound effects are fine, there’s no in-game music, which makes your adventure a bit of a plod through silence. Which is a shame, because this is a deficit that also affected ‘Switchblade 2’. Even some simple drum-beats and minor musical effects wouldn’t have been out of place here, so it does feel like a bit of a missed opportunity.

Controls are good and it’s just as well, because (frustratingly) Brian moves INCREDIBLY slow. I mean, he REALLY drags his feet. And his jump is even slower, feeling more like a float. Even worse, your life hearts gradually disappear even as you simply WALK, meaning you need to replenish them at a shop or suffer death. All of these things are tough for those who enjoy a fast adventure or one that doesn’t regularly penalise you, so you’re going to have to be patient in this game. Moving your Viking is easy, though: he swipes his dagger, leaps, and can use selected weaponry with ease. His animated expressions and body movements are also really funny: falling down long tunnels makes him windmill around, and then see stars when he finally lands with a dull ‘thunk’!

It may seem at this point that there are a few negatives with ‘Viking Child’ to wade through. And this is true. But for all these little flaws, the game is still enjoyable if you give it a chance. Firstly, the cute nature of the enemies and the nice touches in the scenery really stand out; there are ancient wells to explore, pyramids, forests and land-bridges (amongst others). Secondly, the game gives a real challenge. Levels are not always straightforward, and plenty of secret treasure can be found. Thirdly, as it’s a big game, there’s a great password feature to save your progress, which really helps. And finally, the vast range of power-ups, purchases and abilities really add variety, so that your adventure need not be the same each time.

I come to the end of this review with the following summation; I can’t give ‘Viking Child’ a super high grade, but it gets a decent pass. If you enjoy platform games, and you are willing to accept slow progress, old-style graphics and the lack of music, you’ll be rewarded with a fun, satisfying platformer with elements that will keep you interested for a long while. But if you are looking for something fast-paced, sonically great and modern, you may find yourself preferring other Lynx platform titles that better fit that description. Personally, even with the negative issues raised above, I think there’s still a lot to like about this little game. Give it a shot, and see if you can’t make it to the end. The challenge of ‘Viking Child’ awaits!