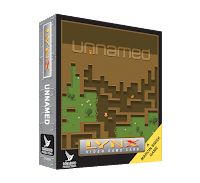 So with the full set of commercially released Atari Lynx games in my game room - how can I take my collection forward?

There are variants to collect, pin badges, advertisements, anything Lynx related to get my Lynx fix....... and of course, homebrews/new releases.

The Atari Lynx has a multitude of homebrews/new games, from just ROMS to very professional new releases. The professional releases have really caught my eye. New boxed games for the world's greatest handheld will sit very nicely on my shelf next to my official games collection.

The hard part is where do I start. There are quite a number to choose from. Most are the same price (top end prices you pay for the likes of Double Dragon / Desert Strike etc.) They all look so good in their standard size Lynx box. There was one that really looked interesting though – Unnamed. I read a little about the game and was intrigued. A new puzzle game that looked like nothing I had played on theAtari Lynx. I reached out to someone, with no names mentioned that I consider to be like an Encyclopaedia of Lynx knowledge, they confirmed that Unnamed was the way to go. The purchase was made and I eagerly awaited its delivery.

A few days later the game arrives. This is what I love about the Lynx. After all these years you can still get excited about things. I open the package and instantly think this looks very good indeed!

The box art is mysterious like the game description; on the back and the front the box has a lovely gloss shine to it. The manual is also glossy and is laid out well. The cart looks like a regular Lynx game, curved lip and art sticker.

When the home screen loads you are hit with a catchy tune – it makes you want to delve into the mystery straight away. On the note of music, bar the title screen there are only 2 other pieces of music. This isn't a negative thing as the music really suits the game – mysterious tunes that flow with a nice slow paced adventure. It would have been good to have little sound effects when opening a door or picking something up for example, just to let you know you have completed an action but this doesn’t take anything away from the game. If I had to describe the music I would call it eerie and enchanting. Warning - These tunes will stay in your head – especially if you get stuck at any point!

The graphics in the game are basic but done well. They are good to look at and the colours used are bright and effective. You can clearly see your character and the grounds around him (her?). There are different landscapes that are either on ground level or underground. Being at ground level is usually green grassy scenery and underground is brown/black in colour. There are items scattered around the levels that you can interact with, you may not know what they are at first due to them being quite small – but you can make out they are something that needs to be investigated. Tap A next to them, you should get a short description of what the item is. Look for any subtle differences within the landscape of the graphics, this could be a way out or mean something.....or not...

The game play fits the music, a nicely paced adventure game, full of mysterious surroundings. Your character moves around at relaxed speed. The controls work well with the game, it's not a game where you have to dodge dragons or jump over flames so the character is easily manoeuvrable without the worry of doing anything fast. There is a menu which is easy to use, you can look at your items collected and carry out actions. It’s a bit fiddly at first but you will get used to it. You need to explore each screen, looking for clues and items on what to do next. A lot of the items you look at or collect will help you out somehow, you just need to figure out their intended use, if any use at all....

The game has a save option which is very welcome on a puzzle game, remember trying to finish Dracula - The Undead in one sitting? The great thing about a save option is that if you are really stuck or pushedfor time - you can go back to exactly the same point in the game, with fresh eyes a few hours/days later. Sometimes I find if there is no save option, I may never play the game again if i have to start from the beginning. Maybe it's just me and maybe puzzle games are not my strong point.....but how did you get on with Unnamed (leave your comments further down the page)?

Overall I really enjoyed Unnamed. It’s a very polished release. The packaging is of high quality and the game feels as if it is an official release from back in the Lynx’s life. The graphics are pretty and suit the era of 80s gaming, almost reminding me of the top down look of Zelda on the NES - with a little less action. The challenge of the game makes you think, double check and triple check every room you go in. I wouldn’t say its extremely difficult but if you do miss something you will become stuck. There's obviously a solution but you must work it out to advance further into the game. At only one point in this game I became completely stuck (I have to admit I did send an SOS message to a friend and was prodded in the right direction). So do check everything you can see on the screen, even if you think it's not anything significant . You can spend as long or as little time as you like navigating through this game with the save option, which is a big bonus. If you're looking for a new, boxed Lynx release I would highly recommend this game, even if puzzlers are not your favourite game or strong point. A very good and different style of game to keep us Atari Lynx users Lynxing.

I forgot to say.....once you finish the game you are presented with a Game+ mode to try..... this mysterious adventure is not over......yet.