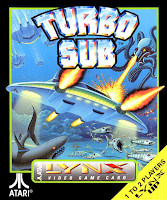 CAPTAIN: "At ease, sergeant. Now, where are we?"

SERGEANT: "Yes, sir! I didn't read the manual, but from what I can figure out, you have to shoot at alien invaders. To win victory for earth! Above and under the water!"

CAPTAIN: "Oh! Well, that sounds fun. What, you can choose to submerge or go above sea level?"

SERGEANT: "Yes, sir! In fact, you must do that to progress. Most of the time you are free to move the ship how you like. It's a shame that, when you reach the end of a stage, the sub tells you when to dive, because it makes the journey a bit linear! Still, there's monsters a-plenty to shoot both above and below the water, sir!"

CAPTAIN: "Well, it certainly looks pretty good visually out there. The water flows nicely, there's hazards underwater, nice looking sky, and lots of blasting action above and below the water. What about the audio in this Turbo... Sub... thing?"

SERGEANT: "It's not bad, sir! No in-ship music to speak of, but the sound effects are great! A bit like 'Hydra', sir!"

CAPTAIN: "Sorry, old chap. Now, tell me about the controls."

SERGEANT: "No issues with the controls, sir! They are cleanly calibrated, well balanced, and make sense notionally in the heat of warfare!"

CAPTAIN: "What on earth did you just say?"

CAPTAIN: "Well, that's great news. Is there anything WRONG with this game, then?"

SERGEANT: "Well, it is a little easy, sir! One reviewer said he completed the journey in an afternoon. He enjoyed the varied nature of the surroundings, but even with the great positives, he wanted more from it. There wasn't much reason to play it again too much once it was over."

SERGEANT: "He said it was like a first person shooter in a sub, which was very cool. He liked that he could buy extra lives and other useful items at the shops. You need to collect the crystals in the surroundings for that. And he thought the bosses were great, sir!"

SERGEANT: "Up to you, sir! I think it's a fun, slightly on-rails shooter which benefits from great graphical variety, nice sound, well-balanced gameplay and some neat little surprises."

CAPTAIN: "Well, I'm pretty sure it's not a bad purchase to make, especially as I've never played a video game before."

CAPTAIN: "Well, what are you waiting for? Get me one!"

SERGEANT: "We're in a Turbo Sub right now, sir. You need to use the steering wheel. We're underwater, sir."