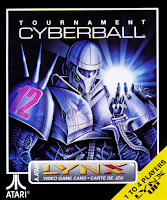 In the future, when you play sport, you’ll be able to bring your vehicle onto the pitch! That’s at least the suggestion of ‘Tournament Cyberball’, a futuristic (and robotic) gridiron-type game for the Atari Lynx. This is a sports field like no other; it’s metal on metal with things blowing up, son! It’s like a WH&S Officer’s worst nightmare. But hey, at least with all that cladding you won’t feel anything when the enraged coach throws the half-time slices of orange at you. Probably won’t be able to hear him either. An arcade coin-op conversion, ‘Tournament Cyberball’ promises extreme cybernoid sports, explosive action and grunt. But unfortunately... it doesn’t really deliver it with any kind of consistency.

This game feels very much like another game in the Lynx library. Yes, it’s hard not to think about ‘NFL Football’ for the Lynx when you play this game, admittedly with the player’s hope that THIS game might be better than THAT one! Roughly, both games are similar in their style, rules, and their top-down portrayal. In ‘Tournament Cyberball’, you have to score more points than your robotic opponents on the field, configuring players to perform a number of moves to get the ball to your opponent’s side. You can choose your coach as well as your team; and then you are thrust straight into the action! I hope you’re wearing your armour suit because you’re gonna get stomped on and crunched, captain! Oh, and there’s the possibility of the ball exploding. So... um... look out for that one.

Graphically and in terms of animation, there’s not too much wrong with this game. It’s nicely coloured, though there isn’t a lot of variety. Sprites are smallish. When you are dealing with a team sports game on handheld, it’s always hard to fit all the player sprites on-screen, but ‘Tournament Cyberball’ handles the visuals pretty well. I found it easier to comprehend the action than ‘NFL Football’, but not as well as, say, ‘World Class Fussball’. The oval grounds look sharp enough and I appreciated the appearing and disappearing yard numbers. The explosions and other effects, too, are nice enough to look at, though not spectacular.

Soundwise, it’s nice to hear some audio speech in the game, as well as other nice other effects. On that audio speech: it’s a little scratchy and garbled at times. But then this may well have been the original intent of the game; after all, we are talking robotic play with people wearing helmets and stuff. I thought I even heard someone gruffly laughing at me at some point, but maybe that was just my imagination. Then again, as I was playing so poorly, I wouldn’t have been surprised. And the difficulty of play is, sadly, the same issue that caused real barriers with the “cousin” of this game on the Lynx, ‘NFL Football’.

Yes, the tricky thing with ‘Tournament Cyberball’ is that, just like ‘NFL Football’, there’s too harsh a challenge in just SCORING for your side. It’s not necessarily that the controls are fiddly; but they are still trickier than other games. It’s true that many games where you control multiple players can fall into a trap of a challenging user interface; where you need to constantly swap players you are controlling. But the main issue here is actually getting ANYWHERE toward your opponent’s line.

The game does allow you to perform a variety of interesting offensive and defensive plays, much like ‘NFL Football’; but, they don’t let you advance the action too far forward in the opponent’s half. In other words, it’s really hard to beat your computer controlled opponent, and you’ll find yourself having scores notched against you quite a lot. It’s not quite as tough as ‘NFL Football’, but as I’ve said, it seems to suffer from the same issues. At least in this game you aren’t stopped at every single twist and turn. That’s what made playing ‘NFL Football’ next to impossible.

Still, when thinking about the overall game here, there are a few interesting elements to try and capture interest. For example, there is an ability to purchase more advanced bots from your score-point money. Honestly though, this really didn’t appeal to me too much. I think I would have preferred to have access to a selection of better robots from the word “go”, so that I could incorporate the stronger ones into my tactics and strategies. The in-game action in this title really had potential, but it lacks some elements that could have made it great; special abilities, surprise elements, rabid crowd interjections... these would have really helped this game. In the end, there’s not really enough excitement to keep interest for as long as you would really like.

I give ‘Tournament Cyberball’ credit for trying something different. Who doesn’t like futuristic sports, especially where the rules are modified and robots are involved? But the potentiality here never matches the playability. I wanted to enjoy it more and to get into it, and I really did try; but I found myself constantly coming up against the minimal options, lack of variety and difficulty in scoring points. So as a Lynx gaming experience, it's a playable title but it doesn't really grab your attention or beg you to master its various elements in order to improve your playing results. It's alright, it's passable, but probably only those with patience and fan-associated interest will want to explore it fully.