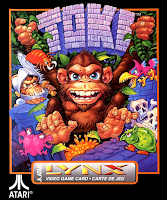 Consider this predicament: the girl of your dreams is kidnapped by some ghastly wizard, and the minute you try and talk some reason into the guy, he turns you into a weird, coconut spitting monkey. The wizard’s antisocial behaviour is enough to put you off your dinner, but since you want to rescue your girl, you’ll pursue him through some bizarre environments to finally meet him in battle face to face.

That’s a brief summation of ‘Toki’, one of the Atari Lynx’s best known platform games (and a Steam PC remake!). The original 'Toki' game was an arcade translation, and it made its way onto many consoles (including the Sega Megadrive/Genesis amongst others). However, it turned out an absolute treat on Atari’s portable system. Let’s take a more in-depth look at the game, taking in the various elements that make it a bit special.

The minute you turn on this game, and the introductory graphics play, you know you’re in for a game that is a bit “out there”. You are more or less chucked straight into the action with your weird monkeyman. And it’s quite a graphical scene! Though not as sharp visually as, say, ‘Shadow of the Beast’, there are some quite amazing visual nuances as you walk along. Detailed backdrops, big sprites, smooth animation and shimmering on special items. Your firepower pellets (ie. from your mouth) will look different depending on the powerup you possess, and you’ll immediately be able to attack the strange creatures that populate the levels before you. Stages vary in their look markedly, from forests with lightning and rain to shining ice caves. Whilst your sprite can sometimes get a little lost in the action, it’s not something that causes many issues overall.

As you leap the canopies and caves of the lands that make up ‘Toki’, you’ll hear some lovely musical tracks and, best of all, hilarious digitised sound effects. These are really, really good. It’s very funny to spit a wave of mouth pellets at the foe (“Bbb-bbb-bbb!”) and then to hear them yell out in high pitch “Ow!” Everything sounds lush, from the echo of weapon fire hitting the walls, to the drop of coins from the sky. Boss fights have their own unique music (and good luck finding their weaknesses - it ain’t easy). The audio effects of ‘Toki’ are easily among the best you’ll hear in a Lynx platforming title. There’s really not a lot that could be improved; they match the character of the game really well.

Control-wise, your ape-dude is easy to move around, but he is a little slow in his walking. There’s no real way to speed him up, or his floaty jump. But then, the enemies come so thick and fast that it’s probably to your advantage. The great thing that your ape can do is shoot pellets in almost any direction, including when he is hanging off a vine. It’s one of the very cool things about the game; the absolute versatility of the main character. Later levels will allow you to swim, jump a lot on monster heads, and leap from ropes over ravines. There aren’t a lot of other button pressing motions you’ll need to do other than fire, jump and move, but it’s your skill that will be greatly tested as you do this, because ‘Toki’ is tough as nails when it comes to challenge.

In terms of play, the great thing with ‘Toki’ is that you never will know what to expect. Giant sea creatures... gorilla-controlled enemy statues... monsters throwing their eyeball at you (gross)... every turn brings some new and dangerous hazard. Almost everything wants to hurt you, including many of the platforms you jump on and even the plants! Probably the biggest criticism of ‘Toki’ is that it’s just TOO tough. Only absolute ninjas will get to the later levels, and the difficulty does somewhat affect game enjoyment. It’s easy to throw your hands up and play something else. That said, one thing the Lynx has in general is a glut of games that would rather challenge you than let you win too easy. ‘Toki’ is certainly one of those games. You do wonder, though, whether it would have been better to ease players into the difficulty gradually, rather than pulverising them by the end of level 2.

Still, despite these niggles, you won’t find many Lynx platformers with the kind of sheer variety ‘Toki’ has (except maybe titles like ‘Scrapyard Dog’). There’s so much to see and do, and there are also items in each level to tempt those who are just that little more daring. Try picking up the gridiron helmets on each level; they are almost always somewhere horrible. Tricks and traps lie everywhere, so you’ll often find yourself relieved to reach the end of each level, and give yourself a huge pat on the back. Here the arcade roots of the game are really felt, and you are reminded that this was a game developed to give gamers a real challenge, rather than hold their hand all the way through. Yeah, hand holding is not going to happen here, so really the big test is whether you’ll keep playing long enough to keep progressing to the dangerous later levels.

Throwing the game aside, however, likely won’t be too common a problem for ‘Toki’; it’s a game that has been converted well from the arcade and plays brilliantly. Sure, the character isn’t that fast, and the game has a really tough path ahead. But there are few Lynx platformers that are this much fun, and which have this much personality. ‘Toki’ asks you to try again and again, purely because it’s a high quality cart with plenty of “I did not expect that to be there” moments. In a world of highly predictable platform games, ‘Toki’ revels in giving the player nasty little surprises, some laughs along the way, and a strong challenge. And that’s enough, really, for me to go ape about.