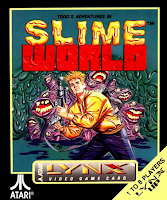 We all love a good space odyssey. A sci-fi adventure where the hero meets mysterious alien creatures, travels planetary landscapes and makes his escape through dangerous caverns. Well, add ‘massive quantities of slime’ to that equation, and you get this game!

Prepare to say ‘yuk’ at your Lynx a few times, because as far as ‘left field’ games go, ‘Todd’s Adventures in Slime World’ is up there with the best of them. If you’ve ever played ‘Boogerman’ on the Sega Megadrive back in the day, it’s not a bad comparison to what disgusting horrors you’re likely to encounter in THIS game. I mean, there’s a secret PIMPLE POPPING mini-game inside this cartridge somewhere. But if you stick around for the grossness, there’s a lot of fun to be had in this graphically rich platformer.

The story is as follows. You are Todd, explorer extraordinaire, ready to explore a distant, slime-filled planet. It’s infested with alien monsters, but it’s also full of precious gems! With your trusty water pistol, you are to explore the slimy caverns, picking up jewels, all while blasting foes to make your way to the exit. Sound easy? It is not.

Once you make your way through the title screen, you may be surprised to notice that you have full access to all levels, and there don’t appear to be many of them. But don’t let that deter you - this game is absolutely HUGE. It’s probably the closest game the Atari Lynx has to the Metroid series. The first level is an enormous, multi-level cavern for beginners, with the simple objective of gathering gems and exiting. But if you’re brave enough, you could skip that for now and try the ‘worst region of Slime World’, and die a million times trying to find your way out. Or, try the epic stage where your gun is jammed (no weapon!). Even cooler is the stage where you need to regularly pick alien field mushrooms, to postpone the planet exploding by a few more seconds. Making your way to the exit here is INTENSE. There is plenty to do in this game, and having the whole game open and unlocked to you from the start is actually seriously cool.

As this is a platformer, gamers will be surprised to discover that Todd has more than a few tricks up his sleeve, and that the artefacts you find will have huge consequences in regards to your progress. Todd can jump, climb, shoot water pistols, direct his weapon in all directions and pick up items along his path (including jet-packs to skip big portions of a level). Water is the natural enemy of the slimy beasts that abound in each cavern, so you’ll be picking up power-ups for your gun often (which expand the blast range). Exploring is one of the main ways you will discover the multitude of secret treasure rooms in this game, which are sometimes booby-trapped and hidden from prying eyes. Or, even worse, full of monsters.

Oh, and about those monsters; these things are (1) mostly green, and (2) all are sick. Not necessarily ‘awesome’ sick, though some of them are. I mean more like ‘sick’ sick. There’s a huge variety; mucus spitting aliens, giant boils, screeching flyers and head-suckers for a start (worth getting grabbed by that last variety just for a laugh). If the monster explodes on you, or the ceiling drops slime on you, you’ll need to bathe in one of the many water pools dotted around the level (or pick up a super-gem). Todd gets greener every time he is hit, which gets hilarious and worrying when you’re one hit from death.

Be warned; you will sometimes come across a particularly shocking monster; in which case you’ll need to blast it from a distance or steer clear of it! The worst creature of all is this one particular creature who lies dormant at the bottom of pits, mouth open with lots of teeth; these ones usually like to be exactly where you jump down, and they are sometimes completely hidden underground. You’ll need a heart ECG if you happen to fall foul of one of these late at night with the sound on max; yes, it a one-hit kill monster, and it really DOES scream loudly when it eats you!

Graphically, Slime World should be described as ‘verdant’; be prepared to see a lot of green. Though the scenery gets a little samey at times, there are some great visual effects. EVERYTHING moves, from the pulsating scenery to giant, gross phlegm waterfalls; and each stage looks distinctive. Even better are the stranger parts of levels with slippery walls and slides. The gems look particularly nice; each one cleans slime off you and add to your score, but the best ones are red, and these give you temporary invincibility. I won’t tell you what happens if you shoot a red gem though!

Sound-wise, Slime World is a mixed bag; the music is occasionally appalling, but the sound effects truly shine. Each monster sounds more grotesque than the last, and your water gun makes a satisfying ‘squirting’ noise. The eerie vocal noise when pulling up an alien mushroom is even better; and until you’ve heaved a ‘mega bomb’ into a room full of monsters and listened to it go off, you haven’t found all the joys to be had in this game. Controls are also easy to pick-up and are in no way arduous, though Todd’s jumping can feel awkward and slow at times; it certainly takes a little while to get used to the physics. But even if you slip up, the game is full of save points.

Which leads to the last thing to really discuss; how long will this game last until it’s completed? Well, I personally doubt many will ever truly complete it; it’s that hard. Which is a great thing, really. And that is even with consideration that there is a terrific password system that is a constant throughout the game. Once you pass through a ‘starry’ region of the map, you’ll get access to a code, which can be added every time you turn on your Lynx and - voila - you’re back where you were! That is, except for the almost unmentionable final stage, which is an arcade challenge: no restarts, no codes, with full-on monsters. All the best with that one. In terms of longevity, each stage has its own objective and take a huge amount of time to finish, with monsters and secrets everywhere. There’s a lot of humour in this game too; prepare to giggle!

Negatives? There are a few. The music can be grating. The constant ‘green-ness’ can also get visually stale sometimes; but it’s not so off-putting once you see the overall graphics you are dealing with, which really are great. The map feature is good, but could be more helpful. I would have also LOVED a series of special artefacts to find along the way, accompanying the gems; but then, there are PLENTY of great surprises along the way, so be prepared to have your expectations confounded each time you play.

‘Todd’s Adventures in Slime World’ is a quality, fun game for people who like platformers with their own style. It’s visually impressive and has real longevity. Sure, it’s disgusting at times, but you’ll have lots of laughs barrelling your way through those tight corridors, shooting (or avoiding) aliens that should have probably stayed in some game designer’s nightmare. So, water pistols out - Todd’s here, and he’s ready to RUMBLE!