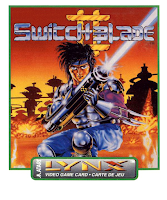 There have been quite a few Lynx games that were originally Amiga titles; the famous 'Lemmings' being one of them. The Amiga computer system produced some epic platformers too, from 'Zool', to 'Dizzy' and 'James Pond'. Man, some of those games would be great on the Lynx! Anyway, one of the game ports we WERE lucky enough to get on Lynx was 'Switchblade II', which places you in the shoes of Hiro, a human tasked with defeating a mechanised horde through multiple levels of platforming danger. Packed with a cannon arm and a knife, Hiro is a fearsome figure himself, so he goes into the battle with more than a little grunt on his side! Are you willing to take on this machine war and gain victory?

If you ever wanted to be convinced that the Atari Lynx can easily translate Amiga or PC titles, 'Switchblade II' is the game to look at. It's virtually identical to the Amiga original, except for a few graphical tidbits and differing sound effects. Translation-wise, it's really well done. It's worth checking out YouTube and watching both the Amiga and Atari Lynx longplays; see, there's not a lot of difference between them! Hiro is a small sprite (and so are his foes) but they're very cleanly drawn; not suffering from the muddiness that marred 'Ninja Gaiden III'. Plateaus, doors, backgrounds and explosions are all beautifully presented, and the robot foes look especially cool. In the graphics department, 'Switchblade II' wouldn't look out of place against classic retro platformers today, from 'Shovel Knight' to 'Mega Man X' (both not on Lynx). Most impressive are the lighting effects when you enter a darkened laboratory and the room lights up... nice!

Sound-wise, we get once again... that... problem of... (breathes repeatedly into a brown paper bag)... NO MUSIC! Sorry, it's a pet peeve of mine: platformers without soundtracks. But I can't be too upset here, because the original Amiga game didn't have in-game music either. That makes the translation very faithful and the formula has not been messed around with. Yes, I would have liked it anyway (throws brown paper away) but that's the story of it I'm afraid. As a result, the action can feel a little non-urgent and somewhat isolating. But the sound effects are really well done, most notably the explosions and robot damage effects. The little celebratory jingle at the end of each Section is nice too. Would have liked more of that kind of music.

Control-wise, there's not much to complain about except that Hiro is kind of slow. Not Brian from 'Viking Child' slow, but just a little snail-like on the pacing. Again, that's just like the source game as well, so it's kind of to be expected. Thankfully, the speed does allow you to think about your surroundings because there are hazards everywhere. The most prominent are lowish robots ready to throw missiles at your feet, and there are even a scattering of small brush fires. These diverse hazards definitely increase in ferocity as the game goes on, so it's good that you have both a jump as well as a super-jump. The latter allows you to leap the higher platforms with ease. Your gun can also be enhanced with a visit to the local shops in various levels, where you can get all manner of destructive powers and life-enhancing objects. And... um... the shops... are kind of one of the... (breathes rapidly into brown paper bag again) ... PROBLEMS with this game!

How are the shops an issue? Because they make the game WAY TOO EASY! Look, I absolutely loved this game from start to finish. With music, more pacing and higher difficulty, 'Switchblade II' would have easily been in the top five Lynx platformers of all time. But I finished this game in my first sitting, and even though I'm a really good platform game player, I don't think platforming players of any standard will have too much issue conquering this game after some dedicated play. The enemy patterns are easy to learn, bosses are EASY with use of shop-bought weaponry, extra lives are plentiful, and the hazards aren't nearly as deadly as they could have been. And yet, beside these negatives, there is so much GOOD about this game! The variety of levels... the graphics and colours... the use of ladders and breakable walls... dark caves and molten lava! It's all awesome. But with just over five 'Sections', there's not nearly enough game to play, and this thing if beauty is over way too soon!

Therefore, the balance of pluses and minuses (listed above) result in, quite honestly, 'Switchblade II' being a really decent little platformer that suffers for being just too easy. Mind you, if you've got a younger brother, sister, or your own children, they are likely to love the easy challenge of this game and how fun it is to play. In that way, I can't mark 'Switchblade II' down too much in the final analysis, because it's a really good game conversion of the original and there's not much wrong with it except the difficulty. My concluding thought is that 'Switchblade II' is a lot like the Lynx conversion of 'Ninja Gaiden III'; a pretty great conversion, but only worthy of 8/10 overall due to some noticeable flaws. Yes, 'Switchblade II' is a good little game for the Lynx, and thoroughly recommended for beginning platform gamers. Advanced platforming players, on the other hand, will need to find their difficulty fix elsewhere.