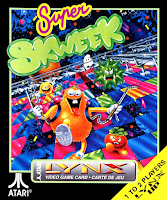 “Cute, cute, cute, more cute...” - oh sorry, I was just playing ‘Super Skweek’, a ridiculously adorable Atari Lynx cart which was a former Amiga game; yes, you read right, the Atari Lynx has yet another game ported from the Amiga! So what is this ‘Super Skweek’ title anyway, and how does it play? Who are these multi-coloured fuzzballs that look like they escaped from ‘Chuzzle’? Lets get the magnifying glass as we zero in on the minutiae; it’s time to SKWEEK!

‘Super Skweek’ is... well, it’s actually hard to describe what kind of game this really is! It’s sort of a top-down action game, involving the painting of floor tiles. Yes, that’s right... painting! It’s got shooting elements, but it’s not a shooter. Puzzling elements, but it’s not a puzzler. And it’s got RPG elements (shops, enhancements) but it’s not an RPG! ‘Super Skweek’ is it’s own weird, wonderful beast, and it’s that uniqueness which is arguably its biggest asset... as well as its biggest weakness.

Gaming archetypes are a fascinating thing. When you see a painting-based game like this, it’s hard not to see it as a front-runner and influence for all manner of modern painting games on other consoles: ‘De Blob’, ‘Splatoon’, ‘Epic Mickey’, ‘Super Mario Colour Splash’, and I could honestly go on. ‘Super Skweek’ keeps the objective simple. The point of the game is to paint all the tiles on each map, whilst avoiding or blasting the baddies. Easier said than done... with a truly massive number of levels, you’ll be at it for a good while before you can finally lay down the paint-roller.

Need I say it again, this is one adorable looking Lynx game. I don’t recall seeing this combination of warm and cool colours very often. ‘Super Skweek’ is the anti-‘Batman Returns’. From the chuckle-inducing title graphics (nice submarine) to the selection screens, it’s all colourful fuzzballs with eyes, carrying paint and doing graffiti; and that’s before you get to the endearing little story screens! You also get a brilliant little level selection screen with a hovering UFO ship, and then it’s time to enter the main game; which reminds you a little bit of the simple appearances found in ‘Chips Challenge’ or ‘Crystal Mines II’.

Everything in this game is bright, colourful and easy to see... and yes, cute as. Waddling penguins and off creatures attack you, there are obstacles to avoid, and your Skweek will make paths of pink as it walks along the blue tiles. The colour pink will scare off those ghastly monsters (as the game box says) so get painting, fuzzdude! Overall, I wouldn’t say the graphics are drop-dead outstanding, but they are vibrant and functional. There is also no doubting the effort put into cutscenes and option screens; that’s at least worthy of some extra marks graphically in my book!

Soundwise, ‘Super Skweek’ is pleasant, but there’s nothing really spectacular to report. The introductory themes are fun and really enhance the cutesy feel of the game. But once you hit the main action, there’s no music; just a collection of various buzzes, blasts and beeps. They aren’t bad or anything, they’re just kind of a standard Lynx fare. When you think of the little voices of the lemming characters in Lynx ‘Lemmings’, it’s hard not to want more voice sounds from the character of this game as well. Still, what we have here in terms of sound effects is nice enough, if unremarkable. For those wanting to know how close the Lynx version is to the Amiga, obviously we don’t get that Amiga ‘Super Skweek’ melodic music during mazes, which is a bit of a shame really.

And when it comes to controls, ‘Super Skweek’ is both good AND bad. Good, because the controls are super responsive and thoroughly logical. But bad, because your character does not travel within a set, linear pattern! Where ‘Chips Challenge’ always had players move in “lines”, it’s easy to accidentally move Skweek diagonal or ALL OVER the place, making the avoidance of obstacles and monsters to be a bit more taxing than it needs to be. Monsters just walk anywhere too, so you have to deal with dangers in all directions, even though your character shoots “straight ahead” only. Thankfully, with the power-ups around the maps (and those available at the in-level shops), you can soon defeat the available foes with far more accuracy; including with the highly effective “X shot” style cannon. Needless to say, these power-ups keep things fun, strategic and appealing.

Looking at it from a distance, the biggest overall positive of ‘Super Skweek’ is the sheer variety and longevity of the game. ‘Super Skweek’ is absolutely huge, with innumerable levels to complete, and the challenge is tricky from the word go. There is a great password system to save your progress, and you can also play practice levels instead of the main exercise. Even more impressively, the game will let you try future levels you’ve never seen before. The whole experience is user friendly, which does a lot for the playability and accessibility of the game for all ages.

The standout issue with ‘Super Skweek’ (aside from the slightly unusual controls) is the fact that it feels like a niche game. It doesn’t fit into any gaming category really, which makes it both unique (a plus) as well as unfamiliar (a minus). I can see some people really enjoying this game, as it does have a lot of great content; but I can also see a fair few other Lynx players not giving the game a lot of time, due to it being formulaic and featuring a fairly steep difficulty curve. You get the feeling that a series of very easy, “monsterless” levels would have been a good idea to ease players in, rather than chuck large mazes of beasts at the player from the start of the game.

Still... as a final conclusion, I think ‘Super Skweek’ is worth investing in. It’s got charm by the bucketloads, it’ll last forever, and the range of monsters, items and traps is truly impressive. The options for play, also, are more numerous than ‘Crystal Mines II’ and ‘Chips Challenge’ put together. It’s a cute little gaming package of surprising depth, and though it has its weaknesses, you certainly won’t find many Lynx games that challenge you to the degree that this one does. The game feels like the Nintendo ‘Kirby’ equivalent on the Lynx: innovative, cute, action packed, with plenty of surprises along the way. So what else can be said? Give this title a try and you never know... it might just find become one of your favourites.